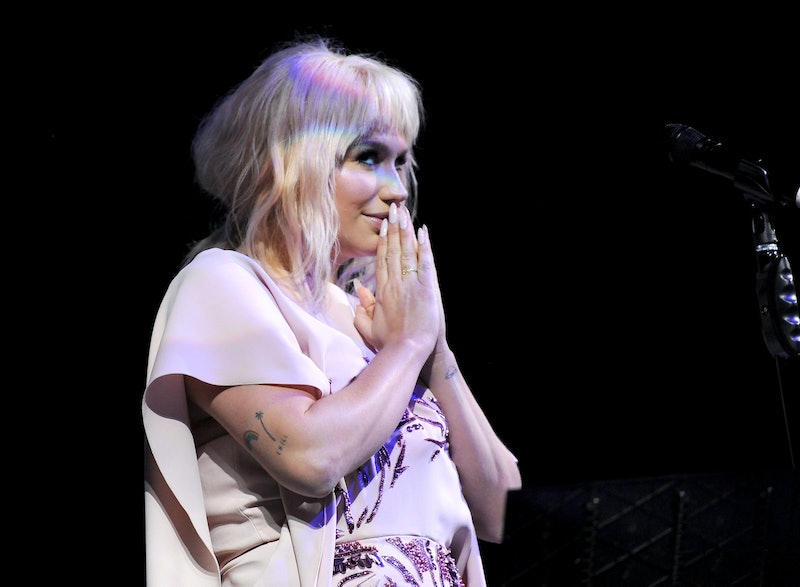 Our hearts ached on Tuesday when it was announced that Kesha won't perform at the 2016 Billboard Music Awards. In an Instagram post following Dick Clark Production's statement that Kesha was not allowed to perform at the Billboard Awards, the songstress said that she planned to do a Bob Dylan cover of "It Ain't Me Babe" at the Awards sans statement about Dr. Luke, despite many reports to the contrary. Kesha also confirmed that Dr. Luke's label Kemosabe Records rescinded their approval for her performance. It felt like our girl couldn't get a break, until Ben Folds brought Kesha on stage to perform "It Ain't Me Babe" at his May 18 concert in Los Angeles, and, shortly thereafter, Kemosabe released a statement saying Kesha would be allowed to perform at the Billboard Awards after all. So, after all this drama, is Kesha now going to perform the same Dylan song at the Billboard Awards?

As of right now, nothing seems to suggest that she's going to change up her song, and, truth be told, changing around the pre-planned song-of-choice for a national television special seems like a risky move (about as risky as a last minute scrapped performance). If Kesha were to go for another Dylan cover, however, she'd probably have some solid options. In 2012, Amnesty International released a massive compilation of Dylan covers entitled Chimes of Freedom, and that included a Kesha rendition of "Don't Think Twice, It's Alright." If she wanted to, she could certainly change it up to sing that song, or possibly another classic that she picked up in the past four years. Most likely, though, Kesha will stick to plan.

On Wednesday, Kemosabe records released a statement saying that Kesha's performance at the Billboard Music Awards is still happening. Apparently, the record label had always approved the performance "in good faith" and only revoked their approval when they thought Kesha would use the Billboard Music Awards as a platform to "discuss the litigation." In their statement, they elaborated about why Kesha was re-granted permission to sing:

Sure enough, Kesha's initial Instagram announcement about the canceled performance seems to assure that she had no intent to talk about the Dr. Luke case in the first place. You can almost hear Kesha's stress and sadness in the caption, where she has to defend herself saying, "I was never going to use a picture of him, speak of him or allude to my legal situation in any way. I simply wanted to sing a song I love to honor an artist I have always looked up to."

This back and forth between Kemosabe and Kesha comes in the wake of the singer's legal battle with Dr. Luke. In October 2014, Kesha filed a lawsuit alleging that Dr. Luke (Lucasz Gottwald) sexually assaulted her, with her lawyer releasing a statement that said, "This lawsuit is a wholehearted effort by Kesha to regain control of her music career and her personal freedom after suffering for ten years as a victim of mental manipulation, emotional abuse and sexual assault at the hands of Dr. Luke." That same month, Gottwald filed a countersuit and denied the charges via his spokesperson in a statement in Rolling Stone in April 2016, which read, "The Court repeatedly stated Kesha is already free to record without Dr. Luke, and that she had not presented any facts supporting her claims. That's because all the evidence — including Kesha's own videotaped sworn testimony — show her allegations are false."

Kesha also tried to get out of her contract with Dr. Luke, but was forced to stay signed to his label. In February 2016, New York Supreme Court Justice Shirley Kornreich upheld Kesha’s original contract with Sony, stating, "You're asking the court to decimate a contract that was heavily negotiated and typical for the industry." Sony says they will allow Kesha to record without Dr. Luke, and, in fact, Kemosabe greenlit the release of her "True Colors" cover with Zedd.

This whole situation is a sobering reminder that all Kesha wants to do is sing. But it's great that she can be free for a day and play the Billboard Music Awards, and wonderful that people keep stepping up to be at her side, however disheartening it is that the privilege can be taken away by her label at any second. Kesha take on "It Ain't Me Babe" at the Ben Folds show above is a great way to get psyched for Sunday, where she is sure to kill it on the stage. After all, she's always been an excellent performer.