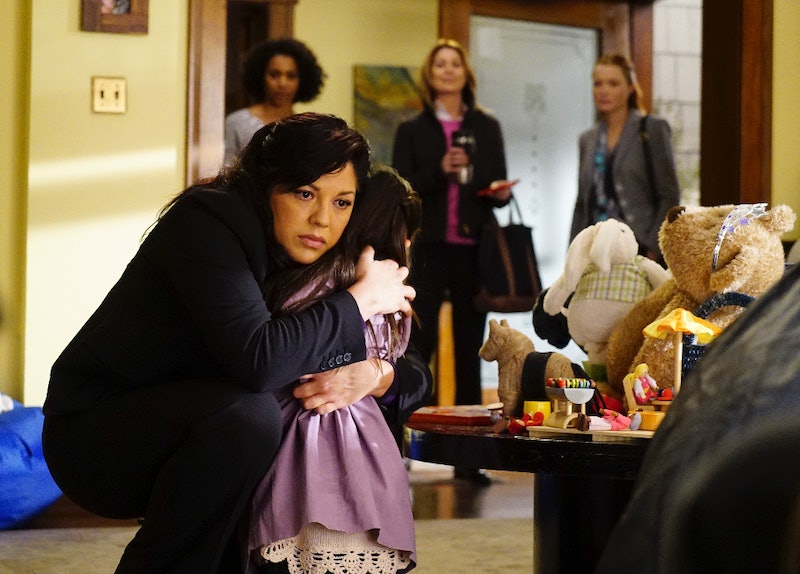 On Thursday, Grey's Anatomy Season 12 came to an end and so did one actor's time on the show. After the finale, Sara Ramirez announced she was leaving Grey's Anatomy. Part of her statement read, "I’m deeply grateful to have spent the last 10 years with my family at Grey’s Anatomy and ABC, but for now I’m taking some welcome time off. Shonda’s been so incredible to work for, and we will definitely continue our conversations!" For a decade, Ramirez played Callie Torres, who first appeared in Season 2, Episode 19, "What Have I Done To Deserve This?" Since that moment, she became a huge part of the series, so come Grey's Season 13, it will definitely be strange to see the show without her. That said, it doesn't mean she is done with the series for good. There's always a chance she could return, so let's talk about how Callie could return to Grey's Anatomy.

If you noticed, in Ramirez's statement, she said she's "taking some welcome time off." I don't know about you, but that stood out to me. Either she means "some" time off from acting in general, or she phrased it this way on purpose hinting that she's not taking a permanent leave from the show, which I'm sure would make Calzona shippers happy.

Callie and Arizona ended on a good note with Arizona extending an olive branch to her former love after that tumultuous custody battle with their daughter, Sofia. In the end, Arizona saw how much Callie was struggling after losing custody to Sofia and with her girlfriend, Penny, going to New York, so she offered Callie joint custody and plane tickets to go be with Penny. Their Season 12 story line definitely came full circle and with a much-needed peaceful ending.

Seeing as Callie's exit did not end with her death (like Grey's does a lot with characters), it leaves the door wide open for the orthopedic surgeon. If Ramirez doesn't want to return full-time, she could always show up for a guest spot or even in a recurring role. I mean, now that she shares custody of Sofia with Arizona, she could easily appear during the holidays or maybe for their daughter's birthday. Something as simple as that could easily bring Callie back into the fold.

I mean, there is also the chance that things won't work out with Callie and Penny, which just might force her to move back to the West Coast. If the latter did indeed happen, it could always push her to realize Arizona is the one for her and, bam, there's the Calzona reunion some might be hoping for. If it isn't family that brings her back to Seattle, there could always be a surgery at Grey Sloan Memorial Hospital that only Callie can handle. Or, maybe, someone will need to fly to New York for a patient, or a surgery, or for a completely different reason, and then that makes the perfect segue into a Callie reunion. Really, the options are endless and there's no doubt that Shonda Rhimes would come up with something somehow.

Obviously, none of the above could happen without Ramirez being in agreement. But, she just might end up really missing her time at Shondaland and decide it's time for her to put back on her Callie scrubs.

So, until she hopefully does make her triumphant return, let's honor Callie with a gif of how she first stole fans' hearts.

Callie and Ramirez, you both will be missed.