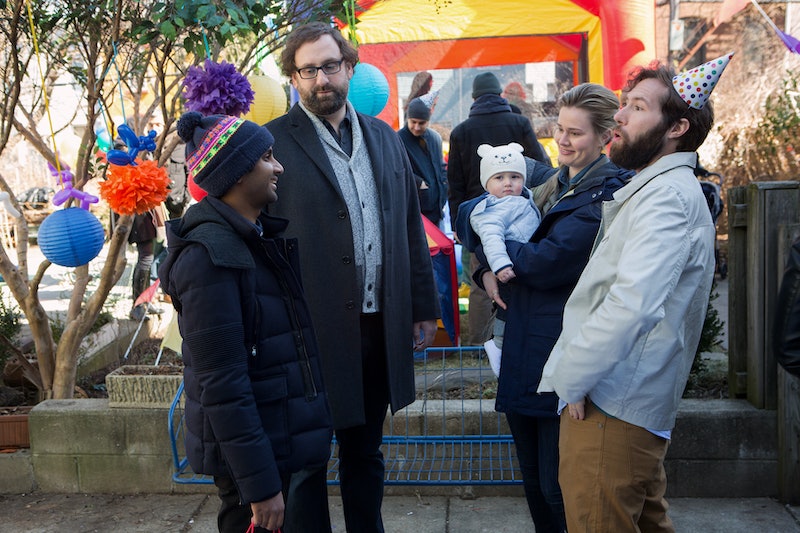 Master of None is a show filled with bros, including leading man Aziz Ansari. But I would never consider it a bro-y show. As much as I love a good dose of testosterone à la Entourage in my binge-watching sessions, Master is able to showcase an ensemble of men yet provide a refreshing, neutral take on modern-day life. This take doesn’t necessarily come from the point of view as a man, but from a genuine place of curiosity as any human struggling to grasp life in their thirties. We mostly follow Dev’s (Ansari) journey in the show, yet as a woman, I can totally relate to so much of it. There is method behind the madness.

Bustle caught up with Ansari and his MON crew before their panel at Paleyfest, where they told me all about why they mean business in incorporating a female perspective into the show. “We’re very cognizant of wanting to have a variety of viewpoints in the writers’s room and on top of that we have a bunch of female writers,” explains Ansari’s real-life partner in crime and co-creator/writer Alan Yang. “We always try to hire female directors, too.”

What makes the show’s female perspective feel so honest is the spontaneity that comes from getting input from females on set and during rehearsals, like from Ansari’s on-screen buddy played by Lena Waithe. “Let’s just talk to [Lena] and incorporate her points of view into the character,” says Yang. “All of our actors our writers too, which is amazing. We’d be fools to not ask what they think of the characters.”

Ansari, Yang and the team know what the viewers want and unlike many other shows, don’t dumb the audience down. “For the ‘Ladies and Gentlemen’ episode, we definitely didn’t want to be like: ‘This is what it’s like to be a women, written by Aziz and Alan!,’” Yang says. “We not only asked all our female writers, we asked girlfriends, our moms, people’s wives. Everybody.”

But as stated earlier, a huge influence on the show’s tone has come from Waithe. From the get-go, Ansari and his team knew she would bring a certain special spark to the project. During a MON panel, Ansari told the story about the very first time he interacted with Waithe in a casting meeting. Immediately, he knew she was the extra layer of honesty and uniqueness the show needed. “When you go in these meetings, you meet with all these young actors a lot of conversations are similar, people being like, ‘I took UCB classes for a little bit…,’” the 33-year-old explains. “Lena comes in and is just like, ‘I had the craziest day. I was out with this girl and she’s straight, but I’ve been getting vibes and it might be a turning situation.’”

I burst into laughter along with the audience, while thinking to myself: “Damn. That is pretty f—ing cool.” Waithe’s authenticity and no-phony attitude got her the role, even after Ansari and his crew saw actors upon actors audition after her. She stuck out in the best way.

Now, the 32-year-old continues to embrace her honesty in hopes of making the show as real as it can be through her character Denise:

I learned that I’m very comfortable in scenes with people who are creatives like I am. It’s interesting because Aziz has a very unique process in that everything is copy, his own life. That’s how I operate, I’m a writer as well. When we’re in these scenes, the only thing he’s asking for is the truth. He’s like, “What would really happen here? Based on something we’re doing, what would your reaction be to that? What’s the most honest?”

And she isn’t here to sugarcoat or pretend she doesn’t overthink things like relationships as the rest of us do, because she totally does. “That’s the kind of thing I obsess over,” she admits, “That I think most people obsess over. That’s what we’re doing.” Instead of feeling vulnerable by bringing inspiration from her real life to the screen, she feels “comfortable” in bringing light to such topics. “It always just felt like a bunch of friends sitting around. Yes, we were saying lines, but we were saying things that we would naturally say.”

Master of None should return to Netflix for Season 2 in 2017.