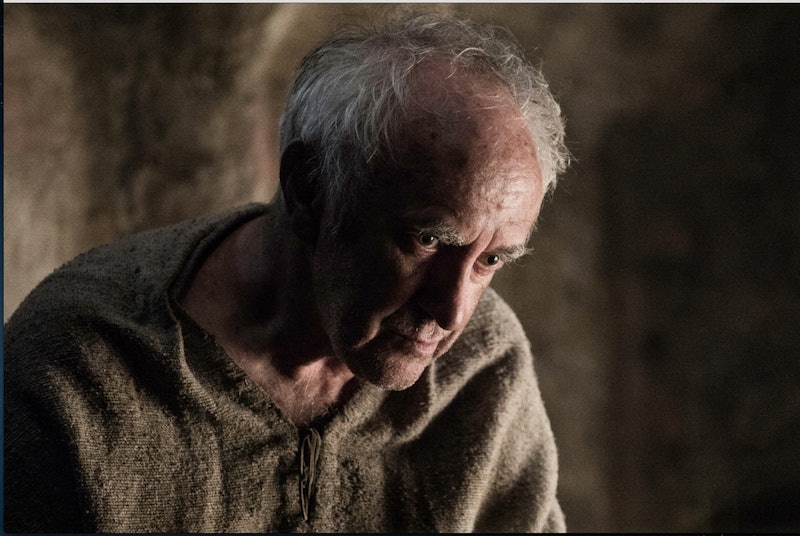 Remember the boy who called wolf? He kept telling the villagers in his small town that a wolf was attacking his sheep, so when it finally did happen nobody believed him and all his sheep were eaten. I hate to say it, guys, but I'm kind of getting that vibe from Game of Thrones now. Why? Well, one of our friends at Game of Thrones, actor Jonathan Pryce who plays the High Sparrow, has recently revealed Game of Thrones Season 6 "spoilers" to the Polish magazine, Kawerna about what is about to go down in the Lannister/Tyrell vs. High Sparrow Bowl. Specifically, Pryce claims the Lannister/Tyrells are going to win the day.

Well, fool me once Game of Thrones, but you will not fool me twice. I am convinced these Game of Thrones spoilers are just a ruse. Remember when everyone lied to us about Jon snow again and again and again? These Game of Thrones actors are not to be trusted. The spoilers in question werea translated by Mashable, and honestly, I think they totally sound like something meant to throw us all off the tracks. But that's not us, guys, because we're smart and internet savvy and have been burned one too many times.

The following is the translation, via Mashable:

"Everyone is waiting impatiently for Cersei’s trial in the Sept. Literally everybody is going to be there. My protagonist has let his guard down – he is absolutely certain that Cersei will show up (at his request). When the messengers inform him that she hasn’t left her home he still believes that she is going to show up at the trial because in his opinion she should be there.

Meanwhile, behind his back — and in his closest environment — there is some scheming going on and everybody is plotting against everybody. The tension is gradually building as the huge Sept is filling up with people — High Sparrow is still happy with the turn of events and he is convinced that everything is going according to the plan. He does not suspect that something unpleasant is about to happen..."

I'm sure that Pryce is not technically lying. Things will likely go down during Cersei's trial. But, I also believe that maybe the High Sparrow will be shocked by the course of events when the Lannisters-Tyrells attack (and maybe someone in the High Sept betrays him?) — heck he might even die. BUT, and I'm stressing this "BUT" to the fullest extent of "BUT" that I can, I don't think that will stop the religious followers that the Sparrow has garnered. He feeds orphans for goodness sake, everybody in King's Landing loves that dude. If he becomes a martyr, they will love him even more.

The royal elite has been messing with the lives of the common man for far too long in Westeros, and it seems about high time there's some sort of uprising. With all the stuff that's happening up North and with Dany across the Narrow Sea, it's just good storytelling to have King's Landing laid bare for a new system of government to ride on in. In order for Dany to "break the wheel," it needs to be chipped and weak first.

Whatever goes on with the High Sparrow, it is bound to be some quality entertainment. I'm counting the minutes until Episode 5 "The Door" when more will be revealed. The last piece of advice I can leave you with is, to never, ever, ever, ever, trust a GoT actor when they release a "spoiler." Don't fall for those GoT boys and girls crying "wolf"!