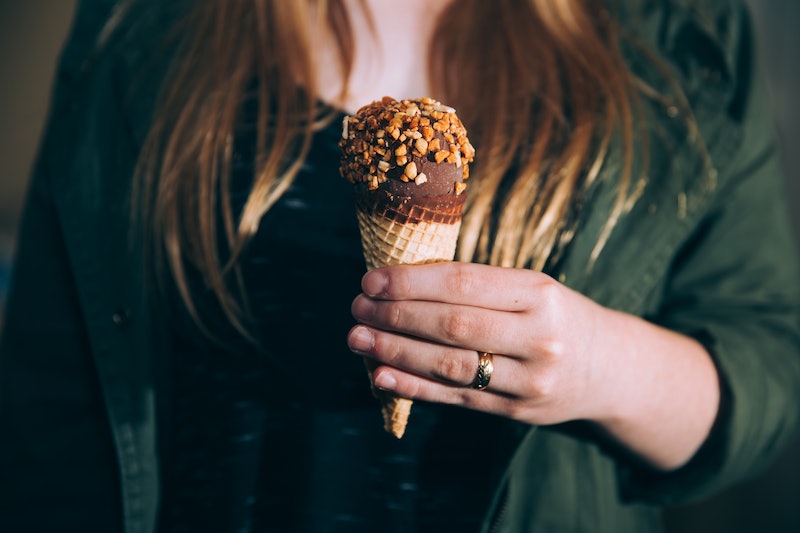 Though genetic and situational factors definitely play their part too, what you are eating matters when it comes to mental health. Taking care to avoid these foods that might be making your mental illness worse is definitely worth your while, because other forms of treatment may unfortunately cost a lot, involve undesirable side effects, or simply not be enough to bust your symptoms for good.

It's true that changing your diet entirely can be really difficult, but if you focus on one change at a time and replace your mind-unfriendly foods with mood-boosting ones instead, you have only good things to gain. Here are a few culprits to watch out for, from carbs to dessert.

Gluten-free foods have become popular among people with all sorts of diets, but some people really do have celiac disease (or intolerance of other components frequently found in wheat-containing foods). And subjecting yourself so frequently to a food your body can't tolerate seems to be implicated in mental health problems like depression, ADHD, anxiety, autism, and even schizophrenia. Avoiding gluten is difficult enough that you might want to be tested for celiac disease by a doctor before you attempt an elimination diet.

If you're thinking of just swapping out the wheat in your diet for other gluten-free grains, make sure to check with a health professional first. A ketogenic (low-carb, moderate-protein, high-fat) diet has had some success in helping relieve schizophrenia sufferers of their symptoms, for instance. On the other hand, people switching to a low-carb diet commonly report experiencing a "carb flu" during the transition — things get worse before they get better. So be careful with this one.

OK, so maybe you don't need to cut all carbs, but sugar would be a great place to start. It might not be the literal cause of mental health conditions, but sugar can exacerbate the mood imbalances and impair memory, making whatever problems you're facing much worse. Moreover, you don't really need to be eating sugar in the first place, especially added sugars.

Thought you might kick your sugar habit with some nice artificially-sweetened goodies instead? Think again, because artificial sweeteners are linked to depression. Researchers don't fully understand this connection yet, but since artificial sweeteners lack redeeming nutritional value, seem to encourage more sugar intake instead of less, and might be somewhat addictive, you'd be better off working on that sweet tooth in general, and learning to enjoy naturally sweet yet also healthy foods (like whole fruit) in moderation.

You may have heard that dairy "causes inflammation," and since inflammation can have such pervasive effects throughout the body, that's bad. However this is only partly true. For some people who tolerate dairy well, dairy may be anti-inflammatory. Yet around two-thirds of adults are lactose intolerant to some degree. If you're having problems with your mental (or physical) health, it's probably worth cutting out dairy for a couple of weeks just to see what happens.

For optimal mental health, you probably need way more omega 3 fats (and fewer omega 6 fats) than you're currently eating. These fats need to be consumed in a certain ratio, but a modern diet contains both more omega 6s and fewer omega 3s than the kind of diet humans evolved to eat. An imbalance may contribute to some mental health problems, like depression and psychosis. It's not enough just to take an omega 3 supplement, like fish oil. To bring your ratio back into balance, you need to avoid the main omega 6 violators: vegetable oils found in most processed foods (like corn oil and soybean oil).

Even popular health foods can go too far. A diet containing too many juices or granola bars might easily exceed recommended sugar limits (even if they're organic), and salads without the right toppings can contain unhealthy fats or too little fat at all. You really need to evaluate each food on its own merits, and within the context of your day or week, to figure out whether you're supporting your brain with your fork.

More like this
Ashley Benson Revealed The Whole-Body Effects Of Her Anxiety On TikTok
By Stephanie Topacio Long
How Long Does Leftover Stuffing Last? Here's When To Toss It
By Chelsey Grasso and Alexis Morillo
Pepsi’s Festive Flavour Is Finally Coming To The UK
By Sophie McEvoy
Heinz Just Relaunched A Bean-Tastic '90s Fave
By Sam Ramsden
Get Even More From Bustle — Sign Up For The Newsletter