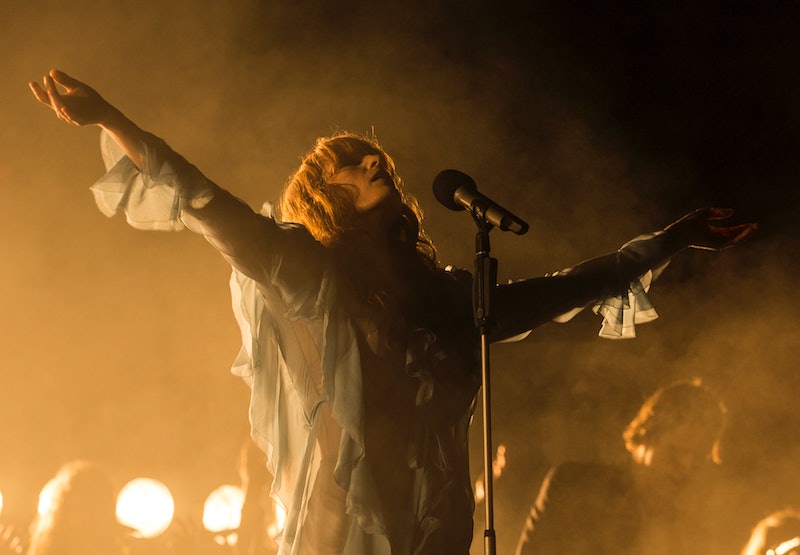 As if Florence Welch's hauntingly beautiful music and always-fun look weren't enough to make her an awe-inspiring performer, she's gone and done thus. In videos posted on Friday, May 20, Welch and her Florence and the Machine guitarist Rob Ackroyd are seen serenading a sick fan, after the teen, due to being in hospice, couldn't make it to the band's May 19 show. As the Huffington Post reports, Welch and Ackroyd gave a private acoustic show to the girl staying at Hospice Austin’s Christopher House, and the videos of their performance will bring you to tears.

The teenager was all set to attend Florence and the Machine's "How Beautiful" tour due to health issues, but thanks to Welch and Ackroyd, the show was brought to her. The hospice clinic released two videos of the duo performing both "Dog Days Are Over" and "Shake It Out" with the smiling patient, and Welch can be seen sitting on the teenager's bed, leading the entire room in the rousing choruses. From the looks on everyone's faces and the all the phones recording the event, it definitely seems like a memory none of them will forget. And if watching Welch and the patient duet doesn't bring a tear to your eye, you are probably made of stone.

But this isn't the first time Welch and her band have gone out of her way to do something kind for a fan. While performing at the 2015 Governor's Ball, Welch noticed a fan in the audience with a sign that said "Hug?" She then invited the fan up to the stage by way of crowdsurfing, and gave them the hug. According to NME, when the fan arrived on stage, Welch said, "There's no need for a question mark at the end of a hug." Aww.

Welch's goodwill extends further than just one-off acts. The singer is a patron of the Teenage Cancer Trust, an organization that hosted a competition asking entrants to draw a picture to feature on a special edition vinyl cover of Florence and the Machine's "Only If For A Night." The winning entry was Louise Clifford's watercolor portrait of her friend Natalie Roberts, who died of a rare cancer at 20, and who had used Florence and the Machine as music therapy before her death to deal with her illness.

From Welch's actions, it's clear that she cares about her fans on a deep, personal level. Her thoughtful actions make this star not just a talented musician, but a role model, too.