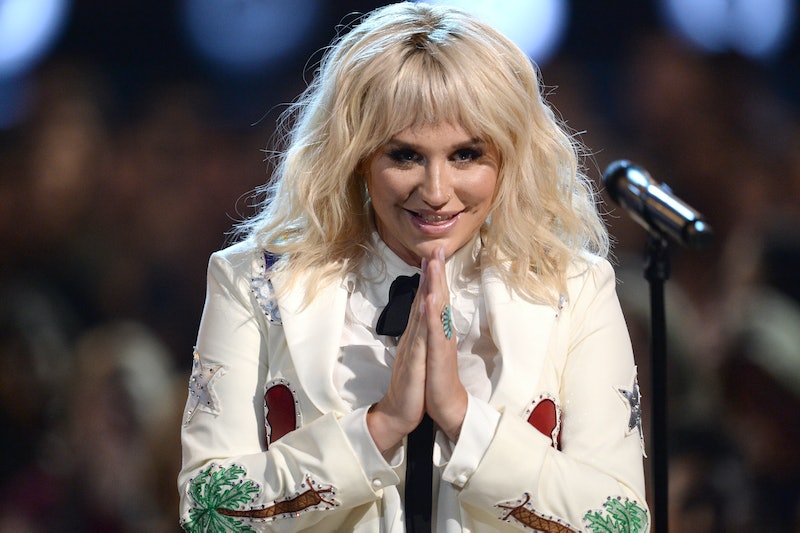 In what was perhaps one of the most important moments of the entire night, Kesha performed at the Billboard Music Awards Sunday — and unsurprisingly, it was not only beautiful but completely moving as well. So much so, in fact, that it really did deserve every second of the standing ovation it garnered. Of course, a standing ovation is no surprise: Kesha's performance was a big one, because it was one of her first majorly public performances since the outcome of her legal battle with Dr. Luke (real name: Lukasz Gottwald) — the record producer whom she alleged, in a lawsuit filed in October 2014, sexually assaulted her for a period of 10 years beginning when she was 18 years old (Dr. Luke filed a countersuit for defamation in October 2014, and commented on Twitter in February 2016 denying the allegations) — was put in the spotlight back in February. Her performance was, as planned, a cover of "It Ain't Me, Babe" and a tribute to the legendary musician Bob Dylan, an artist whom she praised on Instagram as one of her "favorite songwriters of all time."

As she sang the cover — flawlessly, might I add — it became abundantly clear once again that the stage is truly where Kesha belongs. She's an overwhelmingly talented artist, it's undeniable: Singing a Dylan song isn't any small feat, and Kesha pulled it off seemingly without batting an eye. As she closed the track, the audience stood up to applaud her performance — and, of course, the artist herself. It was a moving moment, and Kesha deserved every second of it.

Making this performance even more important to watch is the fact that getting it to happen wasn't exactly smooth sailing. Though the performance seemed to be confirmed for quite some time, on Tuesday, Dick Clark Productions (who is putting on the BBMAs) released a statement revealing that Kesha's performance had been canceled:

Kesha accepted an invitation to perform on the show and she received written approval from Dr. Luke's record label, Kemosabe Records. Kemosabe subsequently rescinded its approval following a media report on Wednesday, May 11 regarding Kesha’s appearance on the BBMAs. Unfortunately, Kesha and Kemosabe have since been unable to come to an agreement for Kesha to perform on the show.

Additionally, she went ahead and performed "It Ain't Me, Babe" at a Ben Folds concert in Los Angeles Wednesday, effectively putting on the show she had planned for the BBMAs anyway, despite being blocked from performing it at the show. Then, on Thursday, Dick Clark Productions released another statement, this one stating that Kesha's performance was back on:

The drama surrounding whether or not the performance would actually happen comes after months of highly publicized legal drama between her, Dr. Luke, his label Kemosabe Records, and Sony Music Entertainment. Her lawsuit, which stated the allegations against Dr. Luke and requested her contract be terminated so she would not have to work with the producer any longer, was thrown out by a New York judge in February 2016, as the judge stated, "You're asking the court to decimate a contract that was heavily negotiated and typical for the industry." Following that decision, Sony released a statement to the New York Times through their attorney, claiming that they would allow Kesha to work with producers other than Dr. Luke, and that her contract couldn't be terminated even if they wanted to try because technically the contract is with Kemosabe Records and not them:

Following that, on April 3, Dr. Luke's spokesperson released a statement to Rolling Stone.

It's not clear if new music is set to follow this performance (she did, however, recently release a new song with Zedd, a cover of "True Colors"), but it's pretty monumental that it happened in the first place. Hopefully, new music will be coming soon — because if there's one thing this performance proved, it's that the world definitely needs more Kesha music.