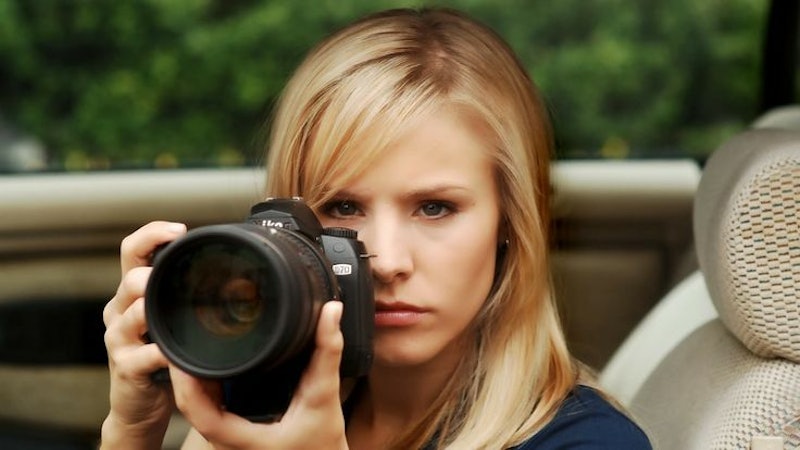 TV just has not been the same since the super teen sleuth series Veronica Mars ended in 2007. For a show that only lasted three seasons, Veronica Mars had incredible staying power. Not only does the smart series still have a passionate fanbase, it also spawned a Kickstarter funded major motion picture and a series of books. People cannot get enough of Veronica, but sadly Neptune's finest is not likely to make another comeback anytime soon.

You could drown your sorrows in another marathon of the series, or daydream about what might have been if the Veronica joins the FBI season had actually happened, or you could try a new show. Granted, nothing will ever replace Veronica Mars , but there are some cool shows out there Veronica Mars fans are sure to love. From cleverly plotted crime dramas to intense thrillers, these shows channel some of Veronica's best qualities, from her snark to the noir feel of Neptune. There's an even a new show from Veronica Mars creator Rob Thomas to keep you enthralled.

Moving on from your favorite show is never easy, but trust me, if you loved Veronica, Keith, and Wallace, then the 14 shows on this list will satisfy your craving for more Neptune drama.

iZombie and Veronica Mars share more than a creator, as they both tell stories centered around sharp young women using their gifts to help people. Liv is a zombie, but she is also a crime solver and a total badass who would totally be best friends with Veronica.

If you ever daydreamed about Veronica living it up in the '20s, then this is the show for you. Phryne Fisher is a witty, dangerous PI who is driven by a strong sense of justice and a need to solve a personal mystery surrounding the disappearance of her little sister.

This one season wonder is a scrappy, addictive modern noir about two down on their luck (if they ever had any) guys who are just trying to do the right thing. Set in a small town full of corruption, Terriers will give you serious Neptune flashbacks.

Dark and full of twists, The Fall tracks a brilliant detective and calculating serial killer as they play a dangerous game of cat and mouse with each other. It is much darker than Veronica Mars, but if the cases were your favorite part of the series you will love The Fall.

You need Joan Watson in your life, trust me. She has all of Veronica's smarts and snark, and then some.

Jessica is a hard drinking, super-powered smartass who solves cases out of her rundown apartment in Hell's Kitchen. She is clearly the true heir apparent to Veronica's throne.

The sprawling cast of characters who called Neptune home were always entertaining, and the same can be said of the small town characters in the world of Fargo. They may be plagued by crime and corruption, but they are always polite.

If you miss the comedic parts of Veronica Mars the most, then give Brooklyn Nine-Nine a shot. You get detectives and wonderful silliness all in one show.

If Kristen Bell is your forever queen, then House of Lies could be your next favorite show. Bell is hilarious as a cutthroat consultant willing to do anything to get her job done.

Veronica's cases were often deeply personal, and the same goes for the detectives in Broadchurch. The show takes an intimate look at tragedy that will resonate with anyone who followed Veronica's journey.

Stichers has a sci-fi edge and a lighthearted spirit, so if you want quality case of the week storytelling with a side of Logan and Veronica style romance, then you need to add Stitchers to your to watch list.

Forget everything you have heard about AMC's The Killing. This is an intricately plotted, exquisitely acted series that will leave your nerves raw, and your need for gritty crime stories sated.

Pitch black and utterly haunting, Top of the Lake is a grownup version of Veronica Mars that will cut you to your core. It also happens to be one of the most beautiful and challenging series you will ever watch.

One of these shows is sure to fill the Veronica Mars shaped hole in your heart, but if they don't, you call always try Bell's new show The Good Place this fall.