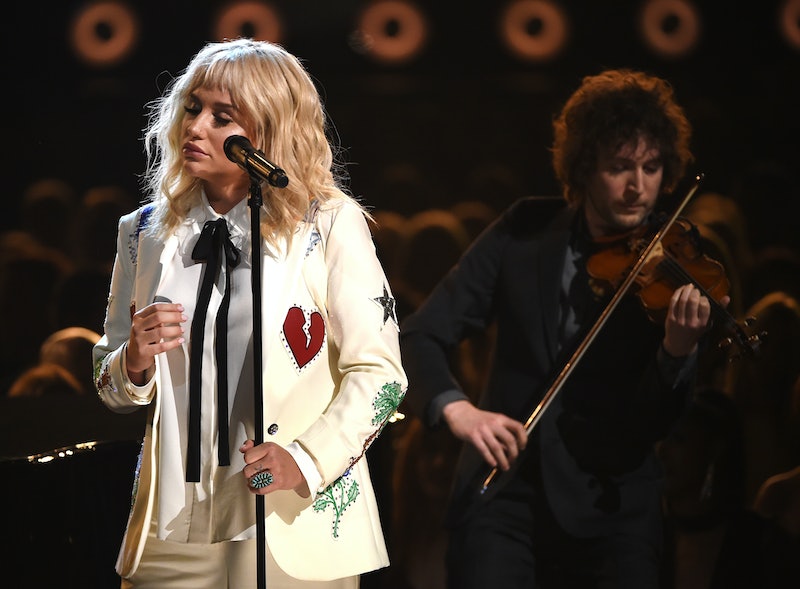 Kesha has showed tremendous strength this past spring, as her legal issues escalated. In an October 2014 lawsuit, Kesha claimed that music producer Dr. Luke (real name Lucaz Gottwald) allegedly drugged, raped, and emotionally abused the "TiK ToK" singer, while Dr. Luke countersued for extortion and denied the accusations in a statement which read, "All the evidence — including Kesha's own videotaped sworn testimony — show her allegations are false." In February 2016, New York Supreme Court Justice Shirley Kornreich ruled that Kesha had to uphold her contract with Dr. Luke. Now, on Sunday, Kesha performed "It Ain't Me Babe" at the 2016 Billboard Music Awards, and, even though she had already sang the song with Ben Folds last week in Los Angeles, her rendition still packed a gut punch and made me tear up. She showed that she's no longer the carefree party girl she pretended to be in her hits "TiK ToK" and "Die Young." Kesha is a changed woman, whose voice has grown and matured as she has.

According to The Daily Mail, Kesha was banned from performing at the Billboard Music Awards, so instead, she went on to sing the 1964 Dylan song at the Los Angeles Orpheum Theatre on May 18. Folds accompanied the singer as she belted out a slower rendition of the classic, which became even more powerful once Kesha was on stage at the Billboard Music Awards in Las Vegas. Turns out, Kemosabe Records approved her performance on the award show after all, releasing a statement:

"Kesha's performance on the Billboard Music Awards was always approved, in good faith. Approval was only suspended when Kemosabe learned Kesha was to use the performance as a platform to discuss the litigation. Now that Kemosabe has obtained assurances, that is relying upon, from Kesha, her representatives and Dick Clark Productions that neither Kesha nor her supporters will use the performance as such a platform, the approval has been restored."

The audience stayed completely quiet and still as the singer's voice carried all of her pain and courage through the gorgeous song. Perhaps she was feeling more triumphant because this time, Kesha was singing the song at the event she meant to sing it at — detractors be damned.

No matter what, viewers and the audience heard Kesha's incredible bravery loud and clear.

Kesha's performance showed once and for all she doesn't need autotune or any other fancy music contraptions — she has a voice that should be heard just the way it is.