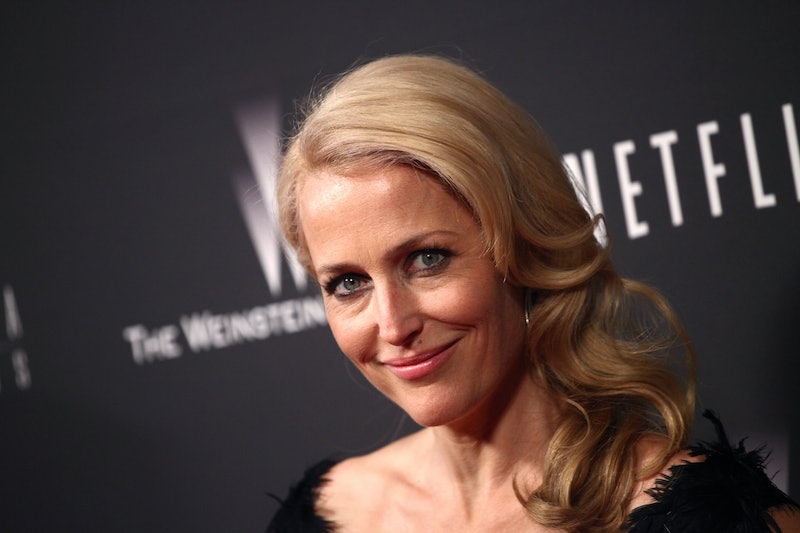 A couple of weeks ago, the Twitter account @StarringJohnCho called for increased racial diversity in Hollywood by making the case that pretty much every movie would be better if the popular Asian-American actor starred in it. Today, some of Tinseltown's hottest actresses are calling for increased gender diversity in a surprising way: by throwing their hats into the ring in the quest for the next 007. Following rumors that Spectre star Daniel Craig is done playing James Bond for good after turning down a sizable offer to headline two more movies, speculation is rampant on who will don the iconic tuxedo next. Will it be popular choices like Tom Hiddleston or Idris Elba? Or might it be a more unconventional choice like, say, Gillian Anderson or Priyanka Chopra?

In an odd twist of timing, both women announced their desire to play the suave super-spy within 48 hours of each other. On Saturday, Anderson tweeted an affirmative response to a fan-made poster that replaced Craig with the X-Files actress on the Skyfall poster. And then this Monday, Chopra gave a spirited answer to whether she would ever play a Bond girl in an interview with Complex: "I get that all the time," the Quantico actress said. "But f*ck that — I wanna be Bond."

The idea of "Jane Bond" is sure to raise ire among the same subset of people who made the first teaser for the all-female Ghostbusters reboot the most disliked movie trailer in the history of YouTube. Additionally, sticklers for accuracy are likely to point out that neither actress is even British. In answer to that second point, although Anderson was born in Chicago, she was raised in London; and, given that Britain colonized India, people of Indian descent are the largest minority group in the United Kingdom.

But in answer to the question of whether Bond should be a woman, I say: Why the heck not? It's 2016! If we can believe Anderson as a trained FBI agent for 10 seasons on The X-Files, then surely we can believe her as a trained MI6 agent for one two-hour movie. Actresses as varied as Sigourney Weaver (Alien), Angelina Jolie (Tomb Raider), Milla Jovovich (Resident Evil), Linda Hamilton (Terminator), Kate Beckinsale (Underworld), Uma Thurman (Kill Bill), Jennifer Lawrence (The Hunger Games), Charlize Theron (Mad Max) — heck, even Helen Mirren (RED) — have proven that women are capable of leading successful action franchises. Why not this one?

I already know what the argument is going to be: "It's fine if you want to make a female-driven action franchise about a super-spy. Just don't call it 007! James Bond is a British man!" In fact, literally while I wrote this article, the New York Post published a piece titled "Why A Woman Can't Play James Bond." ("That’s because Bond is first and foremost about masculinity," the male writer's argument goes, citing the character's fondness for sex and killing while simultaneously forgetting the fact that women can be sexual and violent beings as well.)

But the Bond franchise has always been about reinvention; the character has already been played seven different actors. James Bond also used to be specifically a dark-haired British man until Craig and his blonde hair changed that. Did that destroy the franchise? Of course not. So why should what's between Bond's legs be more important than what's on top of his (or her) head?

A couple of months ago, a group of Tumblr users got together to imagine what an "inverse spy flick" would look like, casting the aforementioned Helen Mirren in the James Bond-esque lead role, with Matt Bomer as her much-younger eye-candy Bond boy, and a supporting cast of kick-ass women including Lucy Liu. It's glorious… and I can practically guarantee that if someone actually made a movie out of it, it would be a huge hit. It's about time Hollywood recognizes that there's an entire half of their ticket-buying audience they're ignoring — the same people who have been clamoring for Wonder Woman and Captain Marvel — and that there's absolutely nothing groundbreaking about casting an eighth straight white man as 007.

Maybe it's time they gave a woman that license to kill instead.