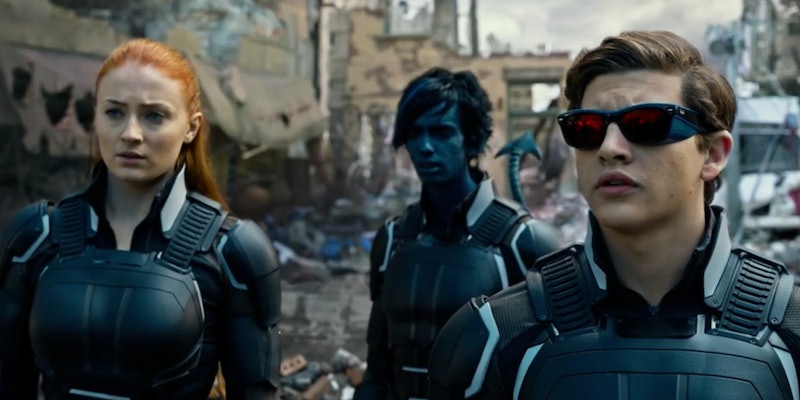 Some people like to go into movies totally blind, blissfully naive about the events about to happen on-screen so that they can appreciate them fully, for the first time. Others, meanwhile, enjoy knowing every twist, surprise, and game-changing plotline ahead of time, so that they can be prepared and not jump out of their seats in shock. Personally, I fall into the first camp; I like watching movies without much knowledge of what's to come. Yet I'm fully aware that not everyone agrees with me — which is why I've provided all the X-Men: Apocalypse spoilers you could possibly want.

It should go without saying that this post is a danger zone for anyone who doesn't want the fates of their favorite mutants ruined for them before they enter the theater. I'm going to be spoiling every major thing that happens in X-Men: Apocalypse, from big character developments to the actions taken by the movie's big bad, Apocalypse, against the heroes we've come to know and love. So get ready to have some crazy surprises from the movie revealed (or, you know, just see the film for yourself), because here are the 17 biggest spoilers from X-Men: Apocalypse , in theaters now.

He's not your typical villain — Apocalypse is an ancient mutant who was buried in an Egyptian tomb for thousands of years, until he's awakened in 1983.

Magneto is living an idyllic life in Poland, but he's led back to the dark side — and to Apocalypse — when his beloved wife and daughter are murdered by Polish police. It's a painful and graphic scene to watch.

Throughout the film, Apocalypse collects the above group of powerful mutants through different methods of coercion (Magneto, for instance, is taken to visit Auschwitz, the site of his parents' deaths) and makes them his four loyal, villainous followers.

4. The Young Mutants Team Up

Relatively early on in the film, a group of new, young mutants — led by Cyclops, Nightcrawler, and Jean Grey — befriend one another and form a tight squad, foreshadowing their probable leadership of the next X-Men movie.

5. Jean Grey Envisions The End Of The World

In a nightmare that hints at her eventual turn into Dark Phoenix, as well as the enormity of her own powers, Jean envisions the end of the world, as caused by Apocalypse.

Despite wiping her memories in Days of Future Past, Professor X seeks out Moira for help understanding and defeating Apocalypse, as he knows that she was on the scene of his rebirth in Egypt.

When Professor X tries to use Cerebro to connect with Magneto, who he knows has gone bad, the technology is taken over by Apocalypse, and the mutants are forced to destroy it before it destroys them. Unfortunately, they're not quick enough to stop Apocalypse from getting into X's mind, which lets the villain use mind-control to make countries around the world release their nuclear weapons into the air. As the nukes launch, people all over the globe (including Stan Lee!) watch in awe and horror.

Despite the X-Men destroying Cerebro, Apocalypse and his Horsemen enter the school and kidnap Professor X. Meanwhile, the school is totally destroyed thanks to an explosion caused by Havok, who seems to have been killed in the blast.

Thankfully, Quicksilver, who's come to the school in order to confront Magneto, his father, gets there in time to (hilariously) save as many students as he can from being killed in the explosion.

Several of the X-Men, including Mystique, Beast, and Quicksilver, are captured by Stryker, and taken to the Weapon X facility. Jean, Nightcrawler, and Cyclops secretly follow them in. Once they're all there, Charles — forced by Apocalypse — sends a message to the mutants saying that they need to protect each other from the threat. He also sends a secret message to Jean, telling her of their location.

While at the facility, the young X-Men encounter Wolverine, but he's not his regular self; instead, he's Weapon X, a brainwashed monster who mindlessly kills all the guards, before meeting Jean, who restores a bit of his former self. He then runs off into the distance.

13. Some Of The X-Men Escape, While Others Fight

Most of the X-Men rescue Charles and fly far away from the scene, but Mystique and Quicksilver stay to stop Magneto from helping Apocalypse destroy the world. Angel is killed in the battle, Psylocke is left alive but furious, and Storm starts questioning her alliances. Magneto, meanwhile, is almost talked down by Mystique, but he only switches side when he sees Apocalypse nearly killing her.

Using their enormous powers, Charles and Jean, both safely back at the mansion thank to Nightcrawler's teleporting abilities, engage in a mental battle with Apocalypse. It's tough for all of them (including Magneto and Storm, who've become allies with the X-Men) but eventually, the X-Men win thanks to Jean tapping into her full potential. Apocalypse is destroyed.

15. The School Is Rebuilt & Friendships Are Reborn

After taking care of some minor business (like restoring Moira's memories), Charles and the others rebuild the school and start figuring out their next moves. Charles and Magneto renew their friendship, but Magneto chooses not to stay at the school.

The end of the movie sees Mystique leading the young X-Men in a training exercise against an army of Sentinels.

17. The Next Wolverine Movie Gets A Boost

The post-credits scene hints at the next Wolverine film, thanks to a scene in which a vial of blood marked "Weapon X" is captured by the Essex Corporation, led in the comics by a famous Marvel villain.