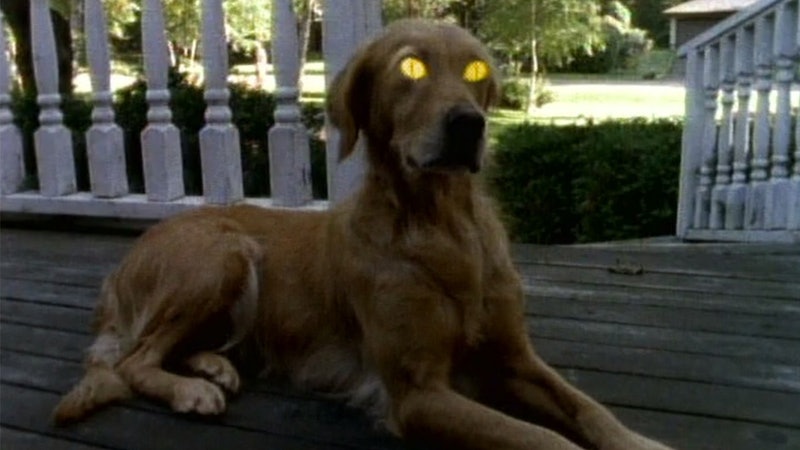 Oh, the '90s. It was a time of wearing choker necklaces, sitting in inflatable chairs, and blasting bubblegum pop music through the headphones of your walkman. Or, if you were a little bit younger, then it was a time when your favorite book series was being brought to life on your television screen. I'm talking about Goosebumps, you guys. Goosebumps was one of the best '90s shows. It had it' original book companions, it was absolutely terrifying for us kids at the time, and, when you look back at it, it's hard not to notice just how incredibly messed up some of the episodes were.

Need help jogging your memory? Well, that's where Netflix comes in. All four seasons and special episodes of Goosebumps is currently available on Netflix. In fact, it's been available for your '90s nostalgia viewing pleasure since 2013. But that doesn't stop the urge to go marathon the entire show over and over again.

There were a number of different things that made this show so great. It included everything from a terrifying dummy to a haunted building to a mask that just wouldn't come off. Odds are that re-watching this show on Netflix will bring on the scares all over again, but why would you want to awaken those childhood nightmares? Well, aside from the pure satisfaction of nostalgia, there's also the fact that this show may have been geared to children, but it was certainly not just a children's show. Now, looking back at it, it's crazy that this show was ever deemed acceptable for children. Even the introduction song and video is terrifying.

In Season 1's episode, "Say Cheese And Die," young teens were dealing with a camera that basically showed them death. As an adult now looking back, I seriously think that that episode's concept is affecting me more. Plus, did I mention that the main character of the episode was played by Ryan Gosling? That's just another reason to go back and re-watch Goosebumps. And that's just one of the many episodes waiting for you.

It's also hard to forget Season 3's two-part episodes "One Day At Horrorland." R.L. Stine ultimately leaves the story with a cliffhanger... Literally. As in, a family of four is left in their car hanging off a cliff while monsters come after them. There's no escaping this theme park. Killing off main characters — or just plain alluding to death — was a common encounter for the show's stars. I seriously don't even know how I ever took a road trip with my family again after watching that one.

So forget about the Jack Black Goosebumps film that came out this past year. The '90s are calling, and they're here to show you just why you fell in love with these stories in the first place. But I will warn you that this is no joking matter. Watchers beware, you're in for a scare.