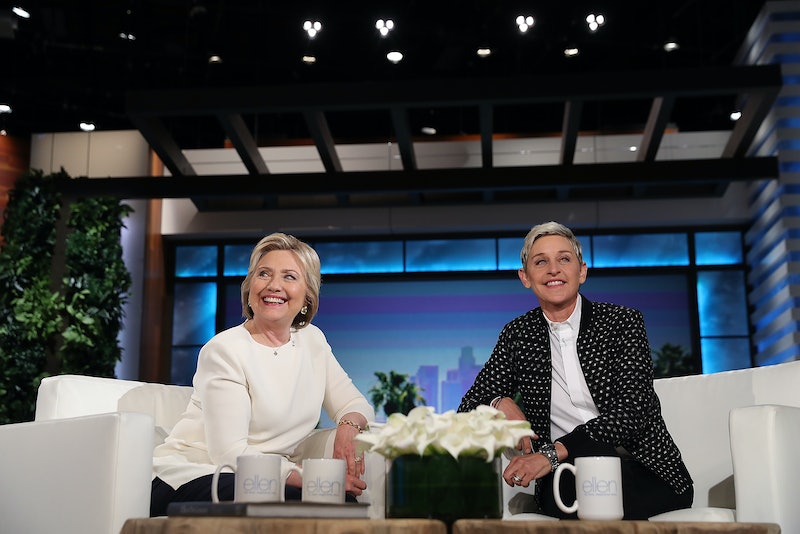 Democratic frontrunner (is it too soon to say presumptive nominee? Has that term lost its meaning yet?) Hillary Clinton went on The Ellen DeGeneres Show on Tuesday, where Ellen brought up her impending nominee-hood and relationship with Vermont Sen. Bernie Sanders. Ellen points out the obvious, that its "like 99-percent sure" she'll be the nominee – and so, does she think Sanders should drop out?

Sanders has said repeatedly he's going to take this thing all the way to the convention (the final ballots will be cast in Washington D.C. on June 14). Just on Monday, he told the Associated Press that the Democratic convention was going to get "messy." As his campaign progresses — or doesn't, depending on your point of view — he's appeared to grow increasingly frustrated and more hostile, including famously suggesting Clinton was "unqualified" for the office. He's complained more and more openly about how the delegates are rigged in her favor. And he's not given any indication that he understands or cares about how he's potentially setting up the party to be divided come November. Yet Clinton told Ellen that she believed when the time came, Sanders would endorse her and be in her corner, as she herself did for Obama in 2008.

I think he has to do what he chooses to do. I understand that. I ran all the way to the end against then-senator Obama, and when it was over — because we had a much closer race than the one currently between Senator Sanders and myself — I withdrew. I endorsed him, and worked really hard to elect him, and I do believe that Bernie will do that.

Clinton and Obama have obviously not always gotten along, and the working relationship they have now seems largely due to her time in his cabinet; it wouldn't have been fair to expect that same politeness when they were rivals on the campaign trail. And it's not as though there was no nastiness or shade –– Clinton aides were known to use Obama's middle name, Hussein, The New York Times reported. But when Clinton dropped out in 2008, she endorsed Obama forcefully, with no equivocations.

The way to continue our fight now, to accomplish the goals for which we stand, is to take our energy, our passion, our strength and do all we can to help elect Barack Obama the next president of the United States. Today, as I suspend my campaign, I congratulate him on the victory he has won and the extraordinary race he has run. I endorse him and throw my full support behind him. ... I ask all of you to join me in working as hard for Barack Obama as you have for me. I have served in the Senate with him for four years. I have been in this campaign with him for 16 months. I have stood on the stage and gone toe-to-toe with him in 22 debates. I've had a front-row seat to his candidacy, and I have seen his strength and determination, his grace and his grit.

Sanders has not, of course, had the opportunity to give his concession speech, so it's only fair to give him the benefit of the doubt here. But he's painting himself into a smaller and smaller corner — when the time comes for that speech, which Clinton seems to believe will be as rousing and supportive as her own in 2008, it'll be hard to believe when he says "just kidding, she's totally qualified." The only reason for him now to change his tune and support her is because that's just what politicians do at this stage in the game. It still raises a few eyebrows each time some former #NeverTrump-type falls in line behind the Donald; if we judge, say, New Jersey Gov. Chris Christie for his newfound loyalty, how will we feel about a candidate whose whole platform is built around a supposed cornerstone of moral integrity and political "outsiderness"?

The alternative, though, is that Clinton was wrong in her prediction to Ellen, and that Sanders will go cantankerously into that good night and take his supporters with him (or, rather, to Trump). June 14 is coming up fast, and there hasn't been any sign that Sanders will be for Clinton what she was to Obama.