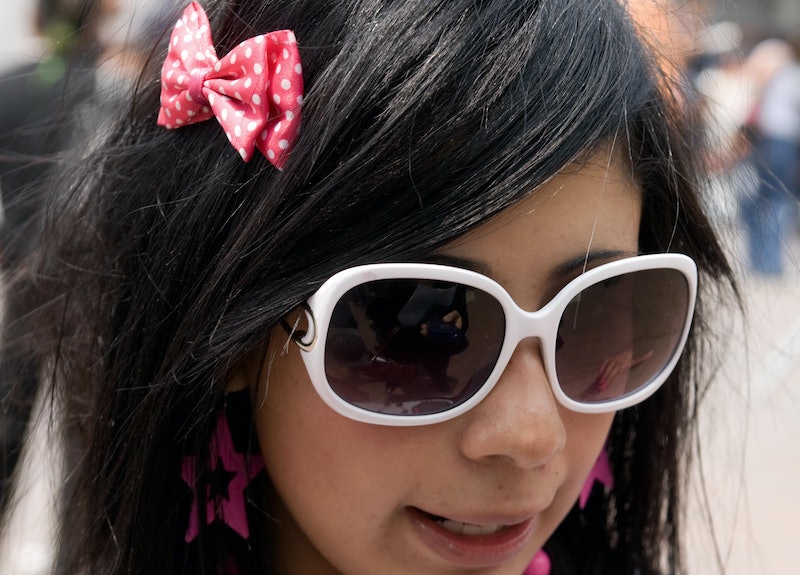 If I called myself a former emo kid today, the echoes of laughter from anyone who knew me in middle and high school could quite possibly deafen an entire city. I was not an emo kid. I wore a lot of pink and asked the dentist to do my braces in Gryffindor house colors and was too afraid to even trim my raggedy long hair, let alone dye it or get bangs. But unbeknownst to all, inside my soul and inside my Walkman, I was a ~secret~ emo kid. And I think it we're all being honest with ourselves, in the years of 2004 to 2007, most Millennials were.

In fact, I think given the opportunity, most of us would have gone full-on emo in that era, if not for the fear of upsetting our parental units. To this day I can't help but face palm at my prepubescent self, who was once so desperate not to get caught for being a little angst baby that I burned my friend's Evanescence CD and wrote the words "Lee Ann Womack: I Hope You Dance" in Sharpie on the front, just in case. The early 2000s were a constant test in toeing the emo line just close enough to feel like you weren't a huge wannabe, but far enough away that you wouldn't get grounded and you could still unrepentantly be the teacher's pet. In other words, you were an actual emo kid's worst nightmare and you deserved every eye roll you got.

If you were also a ~secret~ emo kid, then you understand these moments all too well:

And then listening to them with your headphones turned all the way down in the backseat of the minivan, so your siblings wouldn't hear it and tattle on you.

~ screaming, deceiving and bleeding for you ~ and you still won't hear me ~

Your friends knew about your "secret" account, but only you knew about your seeeeecret account. Although you kept it public and harbored many secret fantasies about your crush finding it and falling in love with your complicated, angst-ridden soul.

Under your hair, because you were hardcore, but not that hardcore. (Not that it mattered, because you definitely lost them on the field during gym.)

"Why would you wreck a perfectly good pair of shoes?"

You didn't even let yourself rehearse an answer for this. Bottom of the shoe Sharpie stars ahoy!

Smothering The Life Out Of Your Hair With A Straightener, Even Though You Lacked The Emo Haircut

There is no pain fresher than looking at photos of your 13-year-old self with scarecrow hair and a slight red welt on your temple from where you aggressively tried to murder that one side cowlick. R.I.P., any chance you had of being cool in 2005.

Can we talk about how old school iPods just kept blasting music when the headphones were pulled out? Dropping it back in the day was slow motion horror. You were constantly one wrong move away from blasting Blink-182 between fifth and sixth period. You lived your entire life on the edge.

Taking 1,600 Selfies With Disposable Cameras You Still Haven’t Developed The Film For

And god forbid anybody ever find aforementioned cameras and attempt to get that film developed, because the world will never be quite ready enough for all those angsty closeups of your nose and left eye.

You swapped LiveJournal SNs and Paramore CDs and took turns aggressively nodding on the bus ride home while the other one lamented that nobody understood how hard it was to be 13.

"Hahahaha what even is that store with all those lame things I didn't buy and hide under my bed when I was hanging out with Tori, pfffft, let's go to Claire's."

Compulsively Checking Your Honesty Box On Facebook Every Five Seconds

Secretly all you wanted was someone to stir sh*t. You were Gossip Girl before Gossip Girl was even a thing. The one and only time someone wrote anything bad in your Honesty Box, you listened to Dashboard Confessional on loop for a solid week.

I can't even write anymore about this because thinking back on a time where we had to share desktop computers with our parents is giving me actual PTSD.

WOWOWOWOWOW, did the actual emo kids hate us, and nobody could blame them. We were annoying AF. But dammit all if we didn't try to be their angsty BFFs anyway.