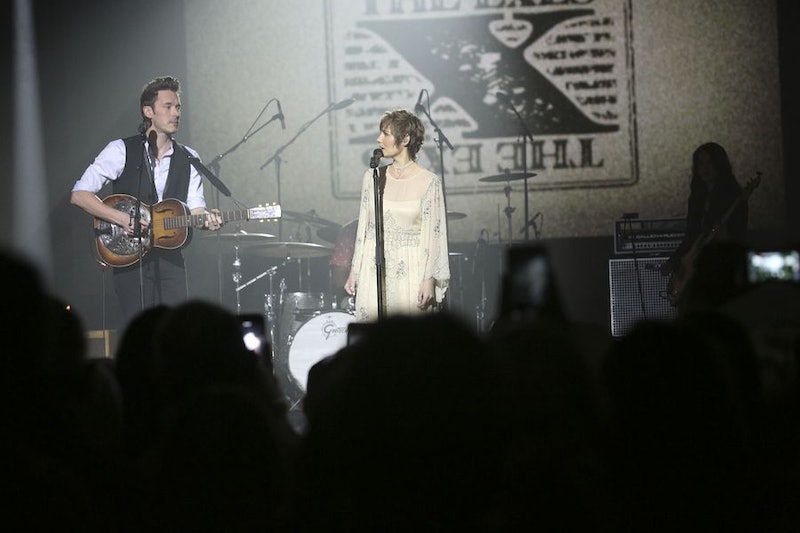 Once I heard that ABC had cancelled Nashville, I knew that there would be plenty of strings to tie up, especially with the relationships on the show. There were so many lovers in flux — who would get back together? Well, one of those mysteries has been solved! Scarlett and Gunnar, otherwise known as The Exes, are exes no longer, especially after Gunnar planted a big wet smooch on Scarlett during one of their shows.

Scarlett realized pretty recently that she was in love with Gunnar — she had been denying it for so long, and a photo shoot she had made her get in touch with her feelings. Unluckily for her, Gunnar recently started shacking up with Autumn, the country superstar they’re on tour with, who is crazy manipulating the situation in order to get Gunnar into bed. Scarlett told Gunnar how she felt, he said he was with Autumn, and the band almost broke up. Ugh, I was barely getting through those scenes. But suddenly, a light started to appear — Scarlett sat Gunnar down and told him how she felt, and then they decided to break up the band. Gunnar must have had a revelation, because he laid a big kiss on Scarlett in the middle of a song during what should have been their final show. Autumn said they were fired, but I think it’s all worth it in the end.

I know it’s the last episode and everything, but my question is — will it last? Gunnar and Scarlett have gone ‘round and ‘round and ‘round before. Is this stop the final one on their road to happiness? They make such beautiful music together that I just hope it lasts forever. Scarlett and Gunnar may not live happily ever after on television, but they will certainly live that way in my dreams.