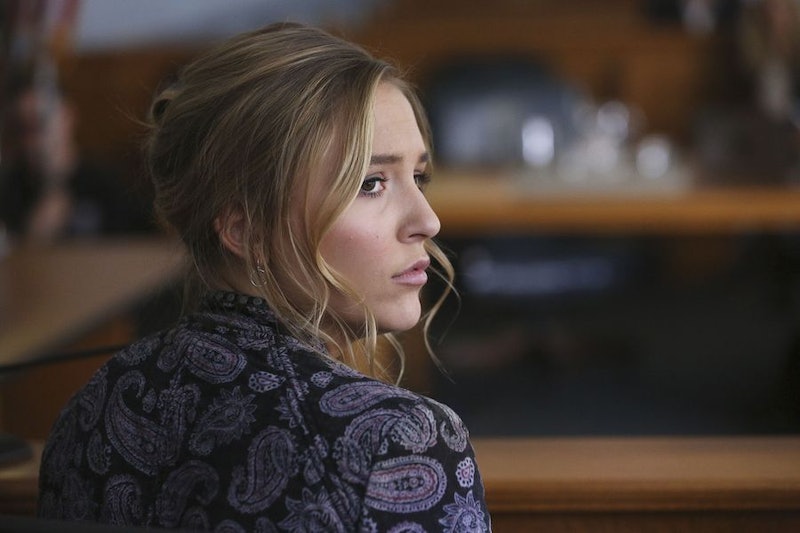 Nashville has never shied away from talking about difficult issues. Over the years, the show has featured postpartum depression, alcoholism, unplanned pregnancy, drug abuse, bigotry, infidelity, domestic violence, and more. It has alway tackled these issues with aplomb, giving them reverence without making them too dramatic or contrived. In the Nashville series finale, another important topic was breached: sexual assault. The alleged taking advantage of young women in the entertainment industry is certainly in the headlines, and on Nashville , Rayna Jaymes wrote an open letter about sexual assault in an attempt to make sure it never happened to an aspiring singer again.

If you’ve been watching Nashville, you know that Rayna’s 16-year-old daughter, Maddie, fought for her emancipation and won in order to sign a record contract and be the big star that she feels she could be. Maddie went to New York to work with producer Vince Pierce, who is notorious for inappropriate behavior with his clients. When Rayna realizes who Maddie is working with, she is terrified — Vince tried to attack her when she was about Maddie’s age and starting in the music business, and she is fearful that he’ll do the same to Maddie. Since she can’t communicate with Maddie openly, she does the next best thing — she writes an open letter and publishes it on The Huffington Post, outlining what happened to her and how Vince shouldn’t work again. Ultimately, it saves Maddie, who sees the article just as Vince starts his manipulation. When Maddie refuses him, he blames it on her, saying that she wanted to be a star and this is what you have to do to be a star.

This plotline comes at a time when claims of sexual assault in the music industry have garnered major headlines. One of the most notable stories centers on recent Nashville guest star Kesha, who has accused producer Dr. Luke of allegedly drugging, raping, and emotionally abusing her for a decade. Dr. Luke has repeatedly denied these claims, and is counter-suing Kesha for defamation.

Another accusation of silent sexual assault in the music industry came earlier in 2016 from Amber Coffman of the band Dirty Projectors. In a long line of tweets, Coffman claimed that music publicist Heathcliff Berru repeatedly touched her and that he allegedly “bit her hair,” but that she was too afraid to say anything about it at the time.

In a matter of hours, other female musicians came out on Twitter to share their claims of alleged sexual misconduct by Berru, and Berru soon issued a statement to Billboard, which read in part:

I am deeply sorry for those who I have offended by my actions and how I have made certain women feel. If I crossed the line of decency or respectfulness in situations when I was drunk and under the influence, there is no excuse, of course. To be clear, while my conduct may have been inappropriate, I have never drugged anyone or engaged in that type of behavior.

Because Rayna's is a fictional case, we can see all sides of the story, and perhaps, even gain some insight about why it's hard for women to speak out when they claim to have been sexually assaulted.

Nashville's final episode shows that, ideally, one person standing up to voice his or her claims — the way Rayna did — can make a big difference. But the consequences women face for speaking up are ever present. Many women affected are likely scared that should they say anything, their careers will be over. Additionally, those who could have witnessed the alleged abuse against victims often don’t speak up either because it's easier to pretend nothing happened. In Nashville, when Rayna went to the head of Maddie’s label to try and warn her, the label head basically said, “Women in this business get hit on. We deal with it and we move on.” It’s that sort of attitude that allows women to be taken advantage of. It’s that status quo that allows rape culture to persist.

The first step in changing this culture and preventing women from being taken advantage of is for someone to speak up. And though Rayna is a fictional character, her open letter can have a real impact. When TV series like Nashville show realistic stories about women, the writers are essentially speaking up on behalf of women who have actually experienced the topics they're writing about. Now that Nashville is over, I can only hope that another show takes up the mantle of tackling fictional stories about real issues and that eventually, women won't have to be afraid to speak up for themselves in the first place.