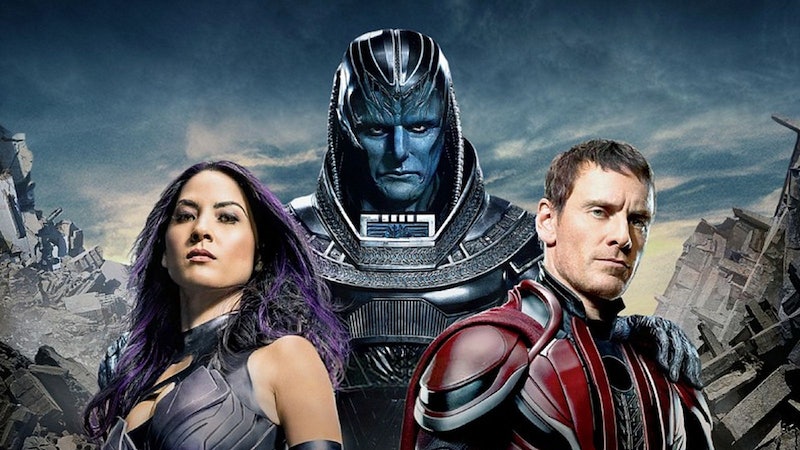 If you've seen any of the X-Men movies, you know that the music plays a huge part in heightening the action. The X-Men: Apocalypse soundtrack is no exception, containing 25 tracks to go along with the new film, in theaters May 27. Similar to the soundtracks of the preceding films, the Apocalypse Official Motion Picture Soundtrack is actually the movie's score, which was written by composer John Ottman.

The album contains tracks with titles such as "Shattered Life," "Eric's Rebirth," and "A Piece of His Past," hinting at the drama that takes place at different parts of the film. Ottman, who previously worked on the X-Men movies X2 and Days of Future Past , was also a producer and editor on the film, so he was perfectly suited to write a score that would intertwine with the onscreen action.

But Ottman told WhereToWatch that the soundtrack posed some unique challenges because of the nature of the story and its placement at the end of the series. He said, "This was a difficult movie. First, it has the burden of introducing all these new characters, the younger versions of the classic characters, Storm, Jean Grey, Nightcrawler, Cyclops.... but at the same time, it has the expectation of being the wrap-up of the three film cycle starting with First Class." Ottman tackled the challenge by writing music for the new characters, but also revisiting existing character themes and including his classic opening music that "puts you in the world of X-Men."

Ottman's original pieces aren't the only music associated with the new movie, though. He also included the Eurythmics song "Sweet Dreams (Are Made Of This)" as the background music for a scene where Quicksilver uses his super-speed powers to save Xavier's students from an exploding school. Although this song didn't make it to the soundtrack, it's a valuable musical moment in the film.

There are two additional songs that weren't included on the soundtrack but nonetheless helped get fans pumped about the movie. The first one is "The Hunted," which appeared in the first official trailer that was released for Apocalypse. Sung by the British band Snow Ghosts, "The Hunted" dished some hearty foreshadowing about the new movie's plot with the repeated line "The hunter becomes the hunted."

The other song that is associated with X-Men: Apocalypse is the Coldplay track "Don't Panic." However, this rendition of the song sounds totally different from the original, as it's a cover sung by singer-songwriter Clairity. Clairity's melodic, soulful voices provides a striking contrast to the violence being depicted onscreen, particularly as she croons "we live in a beautiful world."

As you can see, the music of X-Men Apocalypse is wide-ranging, reflecting the nature of the series itself. You can buy the trailer songs individually now, and you can snag Ottman's soundtrack from Amazon when it's released along with the movie May 27. Let the epic musical adventure begin.