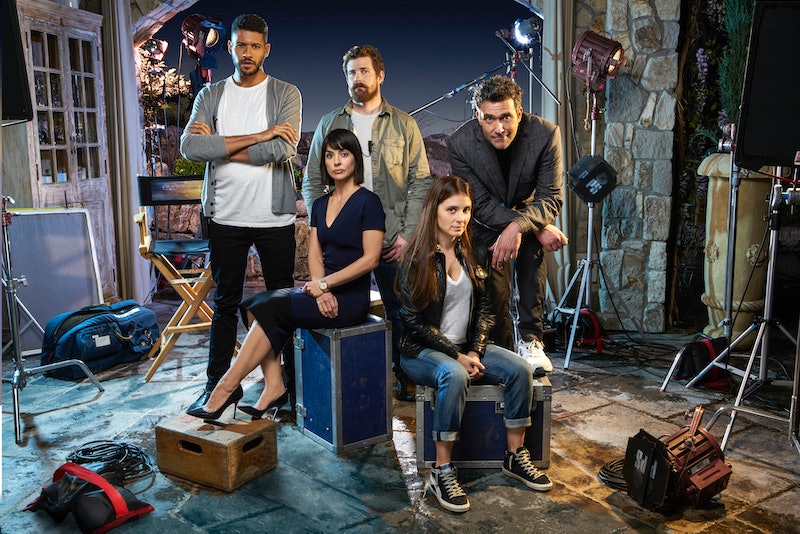 "B*tch, please." That's the theme of UnREAL Season 2 — at least according to Jeffrey Bowyer-Chapman, who plays Jay, a producer of the fictional reality show Everlasting. That was just one of the juicy tidbits dropped about the sophomore season of Lifetime's hit drama this past weekend, between the Peabody Awards on Saturday (where UnREAL was honored alongside the likes of Jessica Jones, The Leftovers, and Mr. Robot) and the show's Vulture Fest panel on Sunday. At the two events, the cast and crew spilled some UnREAL Season 2 spoilers on the new bachelor, love interests, Men's Rights Activists, nudity… and a character nicknamed "Hot Rachel."

"We're definitely starting off the year with a bang," star Shiri Appleby tells Bustle on the Peabodys red carpet. "Rachel's actually running the show this year," she says of her character. "Quinn is kind of moving on, moving up, and so Rachel's taking a step forward. And it, obviously, being the show that it is, all falls apart pretty quickly." Obviously.

For her part, co-creator Sarah Gertrude Shapiro is excited to introduce viewers to Darius Beck (played by Agents Of S.H.I.E.L.D.'s B.J. Britt), Everlasting 's first black bachelor — a landmark that real dating show The Bachelor has yet to achieve in 20 seasons. (Shapiro herself worked as a producer on that reality show for three years before creating UnREAL.) "It feels pretty good," Shapiro tells Bustle about beating The Bachelor to the punch. "I'm happy about it, yeah. It actually just felt pretty urgent and important to do. I actually hope that they do it, too." When asked if she thinks they ever will do it, Shapiro starts to say "I don't think s—" before cutting herself off. "I don't know. Yeah, I don't know."

But Season 2's not just about Darius; there's plenty of focus on that twisted relationship between Rachel and Quinn, too. "I feel like Rachel and Quinn are soulmates, but really f*cked up, twisted soulmates," Shapiro tells Bustle. "I think they bring out the best and the worst in each other at all times." Appleby foreshadows some trouble brewing between the soulmates: "Rachel's really asserting her power, she's very much like a teenager this year, saying, 'I'm gonna become independent, I can assert myself, I don't need you for my success.' So there's definitely that mother/daughter struggle going on."

(But not too mother/daughter-y; Rachel and Quinn will also getting matching tattoos that read "Money, D*ck, Power" — a list of their priorities, in order.)

While she's grappling with Quinn, Rachel will also be getting a new love interest in the aftermath of the dramatic dissolutions of her relationships with both Adam and Jeremy last year. He's a new producer on Everlasting named Coleman, Appleby told the crowd at Vulture Fest. "This could actually be the guy," she teased. "He can go head-to-head with Quinn," which "makes Rachel feel a lot safer." (Quinn will be getting her own love interest this year as well, in the form of Forever's Ioan Gruffud, who plays the billionaire owner of the network.)

And what about the new crop of contestants? "It's like rebooting the show," Appleby tells Bustle on the red carpet. "They've all seen the show, so they know they're walking into something that people are responding to. So they had a lot of excitement and they're all very young and passionate, and so I think the show has a lot of energy this year."

Is there one contestant in particular that viewers should keep their eye on? Shapiro and Appleby both have the same answer: Hot Rachel. "Hot Rachel's the one who looks like Rachel, but hotter," Shapiro explains helpfully. The character is actually a blogger named Yael, "who personally, Shiri loves her, but Rachel not so much," Appleby teases.

Season 2's not just about the ladies, though; the men of UnREAL will be having quite the season, too, it seems. On the more serious side of things, co-star Craig Bierko teased to the Vulture Fest audience that his character, Chet, would fall in with a group of Men's Rights Activists this year. "He's Charlton Heston in Planet Of The Apes," he said, referencing how his character feels like the lone man surrounded in a world full of unfamiliar beings. "And suddenly the apes are in power!"

On the more salacious side, star Constance Zimmer (who plays Quinn) would like to assure you that there's plenty of eye candy among Season 2's male cast. "We have more men with their clothes off than women this year," she promised the audience. "That's not an accident, by the way," Shapiro clarified.

Sure enough, Shapiro also tells Bustle that her first command to Freddie Stroma (who returns as Season 1's suitor Adam Cromwell) when he arrived was to get naked. "I feel so bad, Freddie showed up on set and I was like, 'Take off your clothes!'"

So does Shapiro plan on watching JoJo's season of The Bachelorette, considering her former ties to the franchise? "I just really honestly can't watch those shows," she tells Bustle. "I can't do it. So no. … I have people on my staff watch them so we know what's going on, but I can't watch them." Appleby doesn't even seem to understand the question. "JoJo?" she asks, mystified. "I will definitely set my TiVo," she jokes. "Yes, I just called it a TiVo."