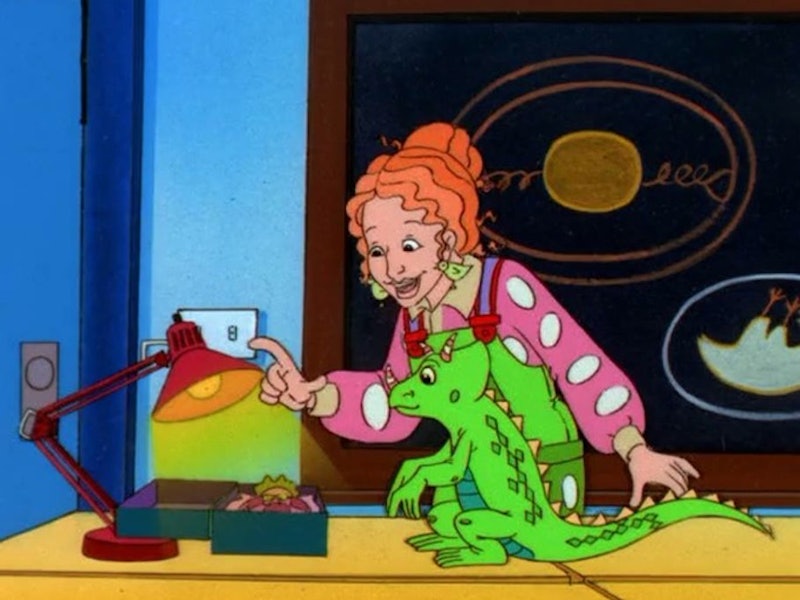 Whenever I'm feeling nostalgic for my childhood and "the way things used to be," I have to look no further than The Magic School Bus. An animated, inclusive show about science that I still remember fondly over a decade later? That's a win. Which is why I was so surprised to find out this Magic School Bus fact that will blow your mind — did you know Ms. Frizzle was voiced by Lily Tomlin? BOOM. Ah OK, not to worry, class, that was just the sound of our host's mind being blown. The reasons it's so light is because we were inside her occipital lobe, and now her head has exploded, so we're in the outside air. Isn't that fun?!

But genuinely, how did I never put that together? Of course it makes sense now; even just thinking of the inexhaustible, ginger-haired teacher's voice in my head gives me confirmation that yup, that was Tomlin! The same lady who tirelessly toiled in the name of feminism in 9 to 5, gave stubbornness a good name as Deborah Fiderer on The West Wing, and stays with me to this day in the delightful Grace and Frankie on Netflix. (Oh man. Just realized I have the weirdest range of Tomlinspiration ever, but I do not apologize. Also don't even think of using that "Tomlinspiration" word I just coined without throwing me a couple dollars.)

Tomlin lent her voice to the eccentric teacher for all 53 episodes, from the original run from 1994 to 1997, and for the show's brief return in 2002, and I truly did not find out about it until just now. But even though I'm just discovering that fact now, it doesn't make me any less grateful to her for making my childhood both informative and fun. "Take chances, make mistakes, and get messy!" Words to live by all the way through to adulthood!