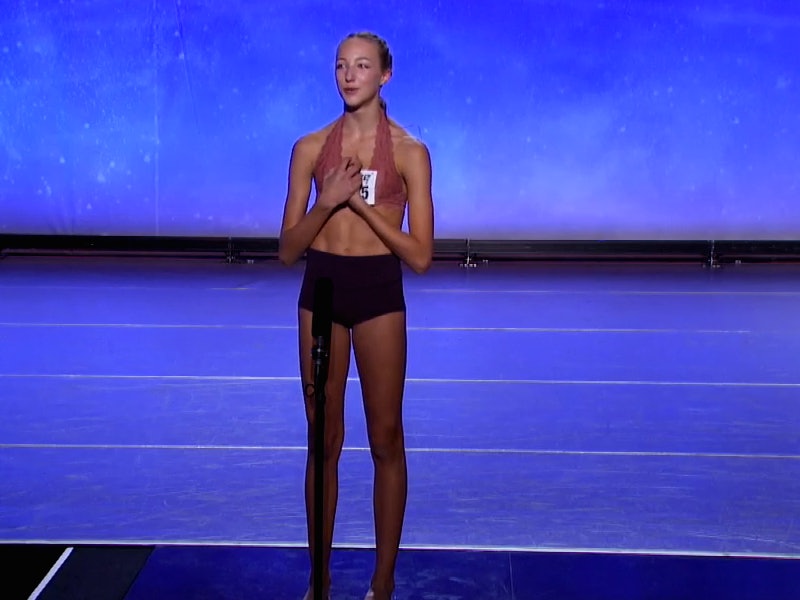 Anyone who is a fan of Dance Moms saw a familiar face during the first episode of So You Think You Can Dance: The Next Generation . And no, it wasn't Maddie Ziegler since Ava Cota auditioned for So You Think You Can Dance on the Monday, May 30 episode. The striking 13-year-old dancer used to be on Dance Moms as part of Abby Lee Miller's Select Ensemble team. Unfortunately, Abby cut Ava from the team due to her height, but judges Jason Derulo, Paula Abdul, and Nigel Lythgoe showed that her being tall was not an issue as she received a ticket to move onto the next stage of auditions that will take place at "The Academy."

As Ava mentioned on the show, she is 5 feet 10 inches, which is even taller than So You Think You Can Dance host Cat Deeley. She performed a contemporary piece beautifully for the judges and was pretty comparable to the adult dancers in previous seasons, so it was obvious that she'd be moving on in the competition. Yet, after her audition, she became emotional discussing the bullying she has experienced because of her body. While Abby Lee or Dance Moms was not mentioned by name, Ava told the judges she had been kicked off of a dance team because of her height, as her mom Jeannette looked on. She also mentioned that she has experienced a lot of cyberbullying not only because of her height, but also because some people think she is too skinny.

While fellow Dance Moms alum Maddie is a judge on The Next Generation season, she wasn't there to judge during the first round of auditions or to see Ava's audition. Although Abby Lee treated Maddie and Ava very differently, Maddie has had her fair share of criticism on and off of Dance Moms and will be able to personally understand the struggles Ava has gone through. I hope the two talented dancers will reunite on So You Think You Can Dance at The Academy and show that the drama that occurred on Dance Moms doesn't matter in real life.

As for the other judges who were there, Paula sympathized with Ava saying how she was always told she was too short and Jason took it one step further by telling her how anyone who is special or in the spotlight will receive a high level of scrutiny and that he has been attacked as well. However, he left his commentary on a positive note by saying her dance inspired him and calling her "limitless."

Ava handled this sensitive subject of bullying with the same level of grace and poise as she showed in her dancing and I can't wait to see her excel on a different — more supportive — dance TV series alongside Maddie once again.