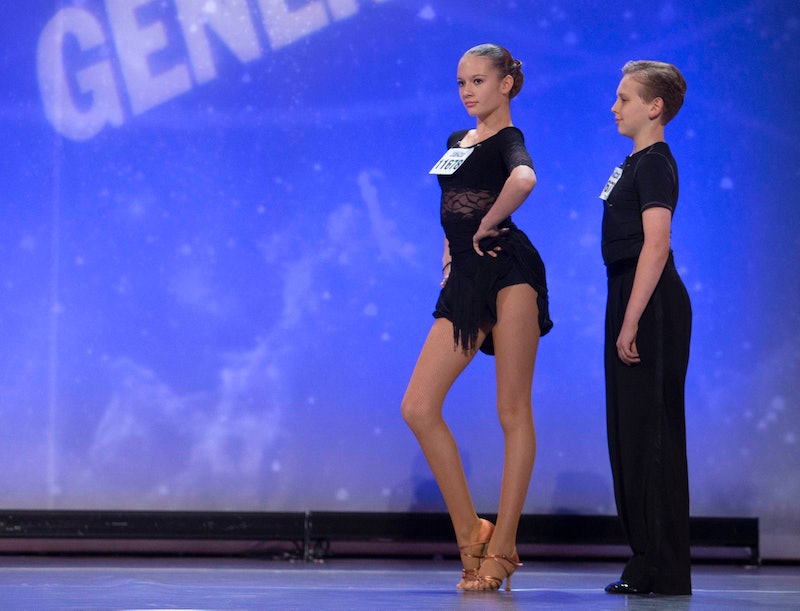 If you didn't think auditioning for Nigel Lythgoe, Paula Abdul, and Jason Derulo was intimidating enough, imagine asking them for a second chance? Well, young ballroom dancer Stella did just that when she asked the judges on So You Think You Can Dance to let her and her partner Geramy perform one more time. During the May 30 premiere episode of The Next Generation installment of the dance competition series, Stella wasn't going down without a fight and her tenacity paid off since after her and Geramy's second audition, Nigel fought for both of them to move forward to the next level of auditions at "The Academy." It was an inspiring moment for the first episode to end on and definitely shows how this season featuring dancers between the ages of 8 and 13 will be the most encouraging season of So You Think You Can Dance ever.

Stella and Geramy are both 12-year-old ballroom dancers and during their first big audition on the So You Think You Can Dance stage, Geramy in particular struggled with getting his movements to match the music. While the judges were about to let both dancers go, Stella spoke up and told the three judges (new judge Maddie Ziegler didn't appear in the first episode) how hard they had worked to get here, including the fact that Geramy lost 25 pounds in preparation for the audition. She respectfully asked the judges to let them show another dance they had prepared and though FOX couldn't help but put a dramatic commercial break before the judges' decision, all three of them unanimously accepted Stella's request.

The ballroom dancers were more confident in their second performance and it convinced Jason and Paula that Stella should move forward in the competition, without her partner Geramy. Yet, Nigel was there to save the day. He asked that Jason and Paula consider sending Geramy to The Academy too. He argued that since Geramy was so dedicated in making it to the auditions, that seeing the hard work required at The Academy would be a great experience for him. Paula and Jason agreed and Stella and Geramy gleefully celebrated being sent to The Academy together.

Besides advocating for Geramy, Nigel also thanked Stella for being brave and asking for a second chance. He then taught the viewers a valuable lesson that if you don't ask for something, you won't get it. Not only was I so moved to see Stella and Geramy get their second (and third!) opportunities on So You Think You Can Dance, I love this supportive side of Nigel and I hope to see plenty more of it as The Next Generation continues.