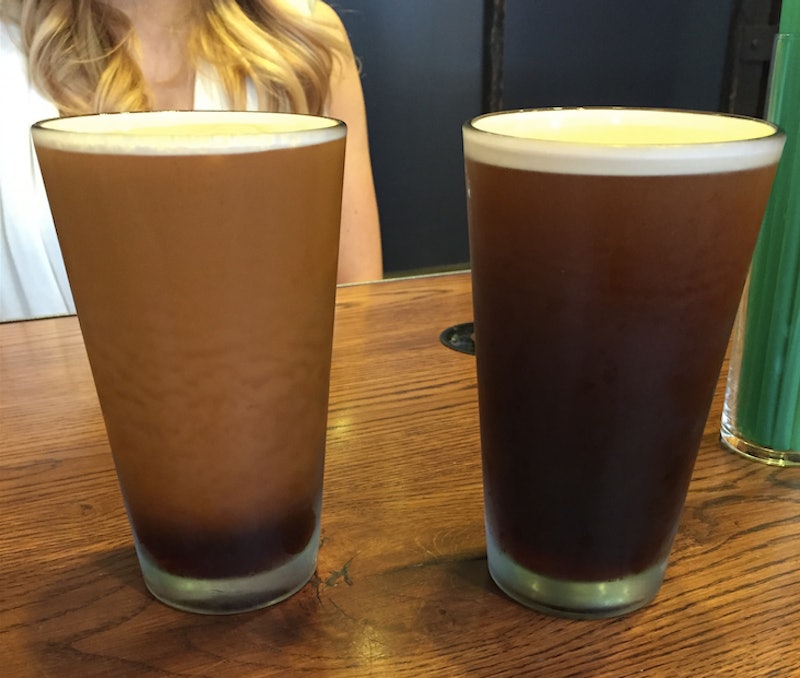 If you love iced caffeinated beverages, you're going to love the newest addition to Starbucks' Cold Bar menu: the Nitro Cold Brew. But while the name of this drink might make it seem super fancy — like, the kind of thing you would find at some niche coffee shop popular with connoisseurs in Brooklyn — it's remarkably budget-friendly. How much does the Starbucks Nitro Cold Brew cost? This treat isn't just refreshing, it's affordable, too.

First things first, it's important to note that the Nitro Cold Brew isn't quite available everywhere just yet, but rest easy knowing that it's on its way; the drink will soon be sold in 500 stores across the country this summer. It's already one of the more popular menu items at the Seattle Starbucks Reserve Roastery and Tasting Room, and will soon arrive in cities including Portland, San Francisco, Los Angeles, Chicago, New York, and Boston shortly. According to a Starbucks rep, the Starbucks Nitro Cold Brew will cost $3.95, depending on the market which, like I said, is a pretty sweet price to pay for the glory that is rich, creamy, velvety, caffeinated cold brew. A craft beverage for under $5? Um hi, I'll take it.

Did I mention the Nitro Cold Brew is also weirdly mesmerizing to look at? The nitrogen-infused Starbucks Cold Brew is dispensed from a special tap, which already adds an extra awesomeness factor, but watch as all the teeny tiny little nitrogen bubbles float to the top of the drink:

See? I wasn't kidding about that.

There are other Starbucks options to keep you satisfied while you wait for the Nitro to come to you. The coffee retailer made its regular Starbucks Cold Brew a permanent menu item last summer, and this year it's introducing the new Vanilla Sweet Cream Cold Brew, which features a delicious vanilla sweet cream made every day in-store that is then floated over your favorite Cold Brew coffee. And, for what it's worth, this one won't strain your wallet either — it costs between $3.25 and $4.25, depending on market.

Cold brew in its various forms is always going to be delicious, but cold brew that's under $5 is clearly the best of them all. But then again, you don't need me to tell you that.