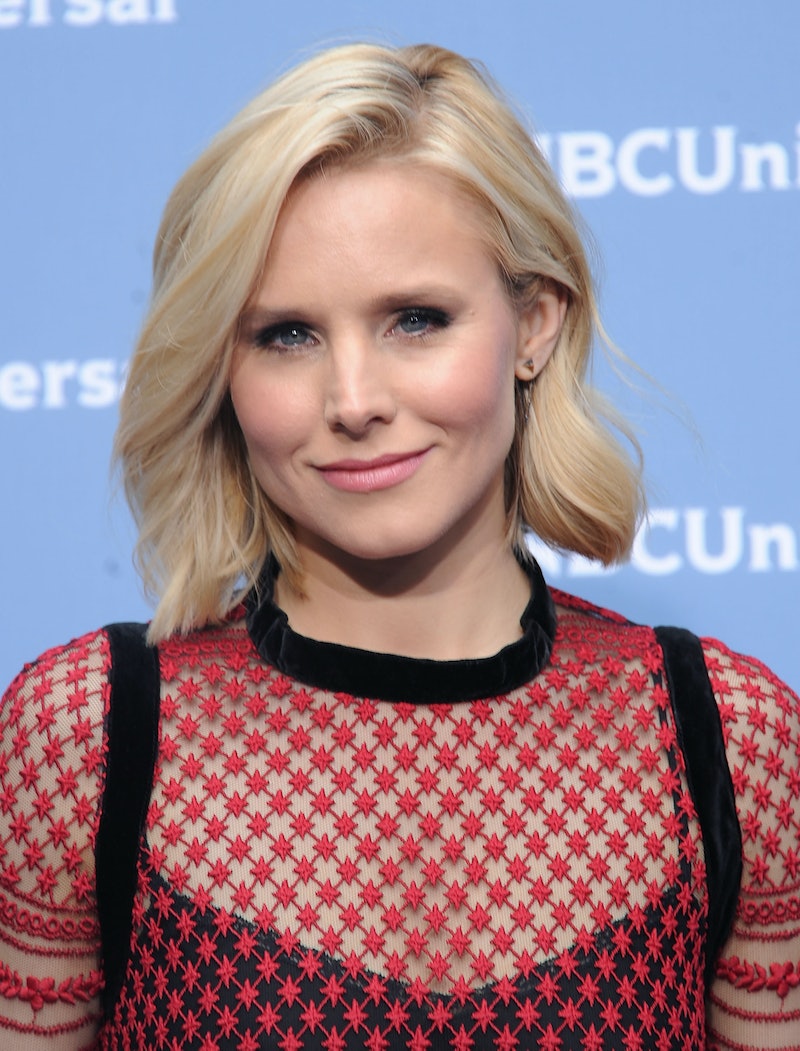 Like her beloved TV character Veronia Mars, Kristen Bell is on a mission. No, she's not working as a private investigator IRL. Instead, the 35-year-old is fighting the stigma surrounding mental health. In a new essay for Motto, Bell opens up about her depression. While this isn't the first time she's spoken about the subject, she digs deeper and highlights why mental health screenings should be taken more seriously in society. She goes as far as suggesting they should be as common as trips to the dentist and she's actually totally right. This shouldn't be a revolutionary idea, but in some ways, it kind of is. There needs to be less stigma and more help available. Bell writes,

Mental health check-ins should be as routine as going to the doctor or the dentist. After all, I’ll see the doctor if I have the sniffles. If you tell a friend that you are sick, his first response is likely, “You should get that checked out by a doctor.” Yet if you tell a friend you’re feeling depressed, he will be scared or reluctant to give you that same advice. You know what? I’m over it.

Could you imagine what a different world it would be if people paid as much attention to mental health as they do physical? While both are equally important, one definitely gets wrapped up in stigma. As Bell says, "I'll see the doctor if I have the sniffles," so the littlest of ailments get attention, yet serious matters of the mind tend to get pushed to the back burner. When you really think about it, it's a bit of a backwards system.

I love that Bell is speaking out and reminding people that there's no shame in seeking medical help for depression, anxiety, or any other mental illnesses. Having celebrities champion this cause can hopefully help their fans realize it's OK for them to get help if they need it, too. In her essay, the Frozen star makes sure to break down any stereotypes surrounding depression. Given her bubbly personality, some may be surprised she struggles with something so dark, but as she points out, "Anxiety and depression are impervious to accolades or achievements. Anyone can be affected, despite their level of success or their place on the food chain." You can't tell someone has depression just by looking at them, especially since it's such an internal battle.

While I'm fortunate enough to never have battled depression myself, I know plenty of people who have and do. Considering the nearly 1 in 5 statistic about mental illnesses, chances are that you or someone you know does, too. And anytime I've talked with a friend about this subject, it usually takes awhile for the convo to surface. That's not surprising, given the personal nature and the stigma surrounding these types of illnesses. As Bell points out, society associates depression with weakness, when that couldn't be more untrue; if anything, it exhibits strength for continuing to battle it on a regular basis.

If Bell's suggestion regarding mental health check-ups was actually implemented, I imagine more people would be receiving the help they need, or at least feel more open about it. No one thinks twice before announcing at the dinner table, "I have two cavities," yet you would never hear someone blurt out, "I had a panic attack," or "my depression is really bad lately." Anxiety and depression shouldn't be so taboo. Granted, no one should talk about it if they don't want to, but there should be the freedom to do so without judgment, if they so choose.

The Forgetting Sarah Marshall actor raises important points and I appreciate her openness on the subject. With big-name stars like Bell speaking out and fighting the shame, hopefully the stigma will eventually become a thing of the past. And fingers crossed that happens sooner rather than later.