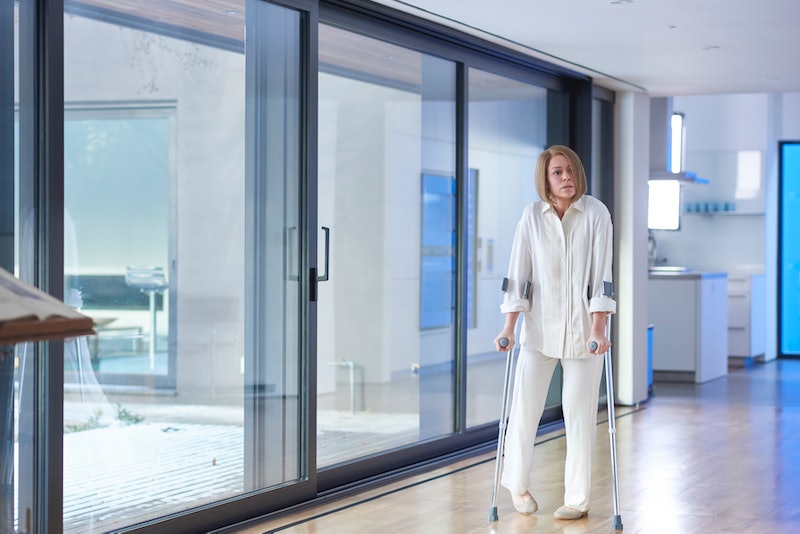 Although the fourth season of BBC America's Orphan Black went back to basics at the beginning of the season by eliminating the Dyad Institute and thinning out the number of conspiracies, things have once again gotten steadily more complicated as the season has progressed. Neolutionist Evie Cho has emerged as the series' new Big Bad, Project Leda has been shut down, and now all the clones — including Rachel — have teamed up together to find a cure for their illness. Speaking of Rachel, things took a turn for the weird for her in this week's episode, when she continued to see disturbing visions around Rachel Duncan's house.

The swan she first glimpsed last week popped up again — and not just once or twice, but several times throughout the house. It didn't linger or fade like you would expect a hallucination to behave; rather, each time Rachel saw the swan, it "glitched" out of existence shortly thereafter. She quickly concluded from this that she wasn't going crazy: the visions weren't caused by her own mind, but rather by the artificial eye implanted in her skull by Susan Duncan.

The visions got steadily weirder, with one quick glimpse of the normally placid swan lying bloody and decapitated on a table — and another sighting of the swan that transitioned from her bedroom into an entirely different room, where an old bearded man appeared to lean down and stare directly into Rachel's false eye.

So what are these visions, exactly? Are they showing Rachel the past — aka recordings that were installed inside of it before it was implanted in her head? Or are they showing her the present — aka someone is somehow hacking into her eye like M.K. hacked into Susan Duncan's computer?

Whatever the case, an intriguing theme is being established here, as Rachel is far from the first character to receive mysterious sightings this season. Aside from Sarah's conversations with dead Beth last week, Kira has also apparently started channeling visions of the future, as evidenced by her "dreams" of some traumatic event involving Sarah and all her aunties. Is it just coincidence that so many characters are seeing things this season? Or is there some root cause behind the show's sudden uptick in inexplicable hallucinations?