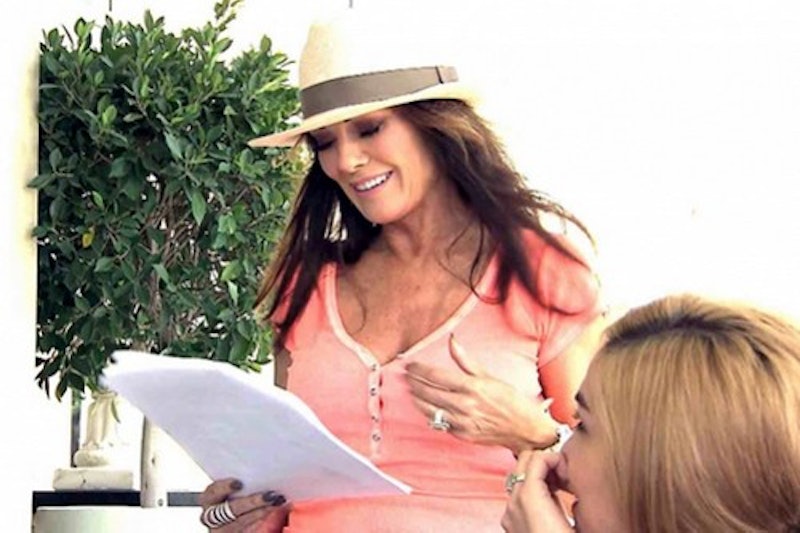 "If it didn't make the Season 2 cut," you might wonder. "How good could any of the unaired footage actually be?" Oh, you doubt Secrets Revealed? You doubt Andy Cohen? What's your damage? You don't want to watch, for example, Lisa Vanderpump help Giggy pick out an outfit? Oh, that's right. You totally want to watch that.

What might've been the best part about Secrets Revealed? That it was an hour's worth of new scenes of the now not-friends hanging out back when they were friends. I get a lump in my throat just thinking about it. Of course I want to watch Stassi Schroeder and Kristen Doute pick out ensembles for their passport photos. Of course I want to watch Jax Taylor lovingly draw wieners all over Tom Sandoval's passed out face. OF COURSE.

Here are my favorite segments from the special (other than Lisa and Giggy arguing over clothing, of course):

Scheana Marie and Ariana Madix visited Nic's VodBox (a walk-in vodka freezer) and sampled the alcohol. When they learned the room was soundproof, they yelled the following:

The VodBox attendant gave them a look that said, "I'm actually surprised this doesn't go down on a regular basis. Note to self: Never tell customers the room is soundproof."

We were treated to more footage of the Lake Arrowhead trip. Specifically, we were treated to more footage of Stassi’s little brother giving Jax advice. When he was done telling Jax how to live his life, he had some words of wisdom for Stassi: “You cannot yell at Jax every day, and don’t be dramatic," Nikolai said. "And especially, don’t go to secret pools and take your clothes off.”

DON'T GO TO SECRET POOLS AND TAKE YOUR CLOTHES OFF. REMEMBER THAT ALWAYS.

During a shift at SUR, Scheana gave Stassi eyedrops. (Why? I think she had an issue with her contact or something.) Stassi put the drops in one eye and went about her business. That was until Kristina noticed her pupil looked bonkers. It was comically dilated. She looked possessed in one eye. It was fairly worrisome. Scheana didn't know why Stassi's eye reacted that way, but they joked about poison and magic? I LOVE THIS SHOW.

And with that, the season is officially over. No more reunions, no more secrets to reveal. NOOOOO! I have nothing, nothing, NOTHIIIIIIIIIIING, if I don't have youuuu, Vanderpump Rules.

How did the cast celebrate Secrets Revealed? They went to The Parlor in WeHo and watched the ep together:

Tom Sandoval, Ariana, Jax, Scheana, Mike Shay, Kristen, and James Kennedy were there (as was 100 Days of Summer's Pascale Wellin). Adorabs. WAIT. Jax's SUR baseball cap. Where'd he get that? Do they sell hats at the restaurant? Or did he have that made? I know they sell candles and t-shirts on the SUR website (shh, don't judge me), but I didn't see hats. I know some guys who could use a SUR hat in their lives.