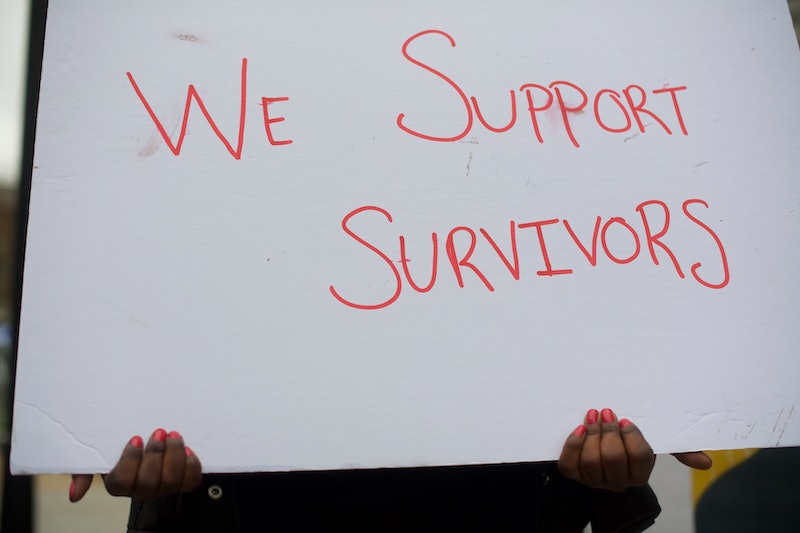 On June 2, Brock Turner was sentenced to six months in county jail for sexually assaulting an unconscious woman on the campus of Stanford University in January of 2015. The woman’s powerful statement, which she read in court to Turner following the sentencing, drove home exactly how inadequate this sentence is — and as letters and character statements about Turner have also emerged over the past few days, the picture painted by the entire case is a sickening look at the rape culture in which we live. One such statement from Brock Turner’s friend, Leslie Rasmussen, reveals how skewed society’s concept of rape still is. It is rife with myths and misconceptions, and it blames the crime on everything other than the person who committed it and the actions he chose to take.

An excerpt of Rasmussen’s statement was tweeted on June 6 by Michele Dauber, a Stanford law professor who helped establish the sexual assault policies of the university; additionally, The Cut acquired the complete statement from an anonymous source. According to The Cut, Rasmussen’s statement was submitted as a letter to judge Aaron Persky prior to the sentencing. In it, Rasmussen, who says she was a childhood friend of Turner’s, reduces the assault to “a huge misunderstanding.” She details having known Turner since elementary school, noting that they were very close in high school; “in all honesty,” she writes, “if I had to choose one kid I graduated with to be in the position Brock is, it would never have been him.” She continues:

I could name off five others that I wouldn’t be surprised about. Brock is such a sweetheart and a very smart kid. I never once caught him harassing anyone, verbally or physically. That would have been so out of his character.

But Rasmussen’s statement falls into the same trap that Brock Turner’s father’s statement does, and that so many headlines about the case have: It assumes that because someone doesn’t seem like they would be capable of assaulting someone, then they can’t possibly have assaulted someone.

These statements all focus on a very narrow idea of what rape looks like, and of what rapists are. They say that because someone swims really well, they can’t be a rapist — even though someone’s extracurricular activities have nothing to do with whether or not they’re capable of assault. They say that because alcohol was involved, it can’t be rape — even though an intoxicated person cannot give consent. They show a flat-out refusal to believe that someone they know could have done such a thing — even though approximately four out of five rapes are committed by someone known to the victim, according to RAINN.

I cannot believe it. I’ve thought a lot about it, and from different angles. I tried to accept that maybe he did intend to harm this girl, but I just couldn’t imagine that was the case. I know rape is a very sensitive subject, for everyone, and especially women. I am not backing it up or making excuses, but there is absolutely no way Brock went out that night with rape on his mind.

About the assault being “a huge misunderstanding,” she writes, “I think that the bikers who found him did the right thing by keeping him there in case he was attempting rape, but that after the investigation, it should have found Brock to be innocent.”

Think about that for a minute.

It says that, despite the fact that a man sexually assaulted an unconscious woman, an investigation should have found him to be innocent. Why? Purely because he always seemed like such a nice boy.

Perhaps most troubling of all, though, is the section of the statement tweeted by Michele Dauber:

Language like “I am not blaming her directly” implies that she is still to blame. Couching speaking out against rape as an issue of “political correctness” implies that those who do speak out against rape are making a proverbial mountain out of a molehill. Saying that “rape on campuses isn’t always because people are rapists” literally ignores the way the English language works: If someone rapes, they are a rapist. Period. Saying, “This is completely different from a woman getting kidnapped and raped as she is walking to her car in a parking lot. That is a rapist” ignores every fact and statistic we know about who commits rape. This whole statement says that what happened to the Stanford victim was not sexual assault — when it has already been determined in a court of law that what happened to her was three felony counts of sexual assault. The damage done to her is irreparable.

Although in some respects, it seems that public opinion is changing such that victims are finally beginning to receive the support they deserve, there is still such a long, long way to go. If this is how our society still views rape and sexual assault — that they are crimes committed by strangers in dark alleys, that the victims are to blame for them, that no one we know could possibly commit them because we just don’t want to believe that they could — then we are blinding ourselves by choice. And we are doing no one any favors by doing so.