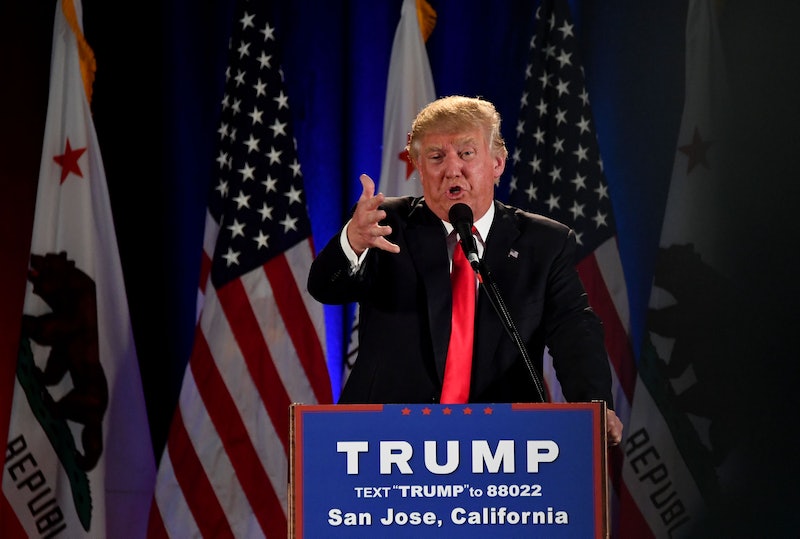 On Tuesday, Donald Trump, as a matter of technicality, won the New Jersey primary. Shortly thereafter, the presumptive Republican nominee had planned to speak about his "great journey" to the Republican nomination. He did talk about his journey, but one theme dominated Trump's speech and it had everything to do with a candidate on the other side of the aisle.

Speaking from his New York headquarters, Trump read from a TelePrompter, an unexpected move given his trademark off-the-cuff speaking style. Perhaps he was finally making that storied pivot from wild and outspoken primary candidate (read: bull in a china shop) to calm and collected general election nominee. Since he clinched the nomination, Trump has faced pressure from Republican Party leaders to stick to the GOP's desired talking points and present a more "presidential" demeanor.

Trump's demeanor may never seem totally presidential, but it's clear that he did make an important pivot on Tuesday night: He appealed not just to the Republicans who now see him as their nominee, but he also spoke directly to Bernie Sanders' supporters. He attacked Sanders' opponent, Hillary Clinton, and urged Sanders' voters to see Trump as the candidate who can fix the rigged system that they have campaigned so loudly against.

"Tonight we close one chapter in history and we begin another," Trump said, signaling the official end of the Republican Party's primary calendar. "Our campaign received more primary votes than any GOP campaign in history." From the very beginning of Trump's speech, it was clear that he would remain more subdued than normal. His words came across as rehearsed, and his voice even seemed softer.

Trump stuck with his usual "Make America Great Again" theme, but his pivot turned him toward Sanders' supporters. Most notably, Trump spoke out against the "rigged" system that he and Sanders have criticized throughout the course of their campaigns. "Why would politicians want to change a system that has made them and their friends very, very rich?" Trump questioned, distancing himself from career politicians.

Trump has called the system rigged in the past, but there's no denying that Sanders feels similarly. For Sanders, the qualm is with the Democratic Party leadership, particularly Democratic National Committee Chair Debbie Wasserman Schultz, and the inclusion of superdelegates into the Democrats' nomination process. For his part, Trump has also expressed a distaste for the delegate system.

Ultimately, every candidate-turned-nominee has to eventually pivot from the primary race to the general election. For weeks, it seems that Trump has resisted the inevitable pivot: Although he has sought the support of the Republican establishment, he hasn't exactly stayed on message. (For more on this, see: Judge Gonzalo Curiel.) On Tuesday, the pivot manifested itself in Trump's rehearsed speech delivery and his appeal to Sanders' supporters.