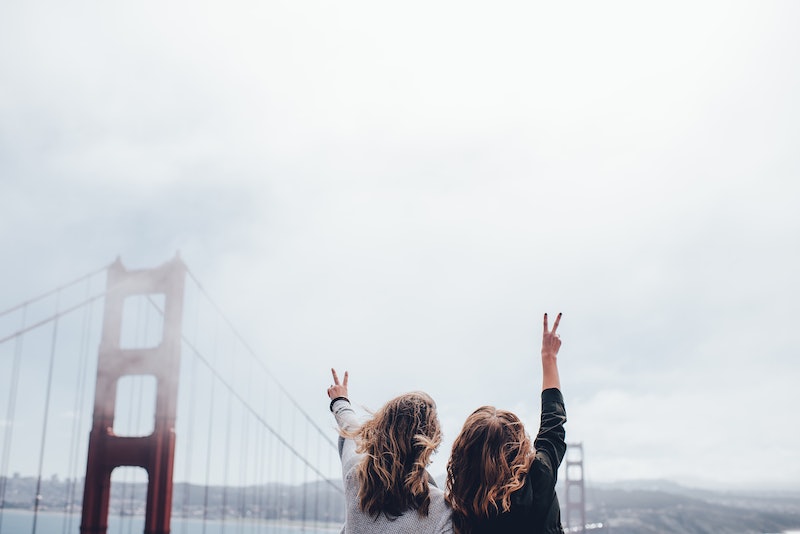 Catherine Lo is the author of How It Ends , out June 7 from Houghton Mifflin Harcourt Books for Young Readers.

A few years ago, several colleagues and I designed a Girls Group at the high school where we work. There had been a series of troubling cyberbullying incidents, and we wanted to take steps to build a sense of community amongst the girls at our school.

Our enthusiasm was high, and we carefully cultivated a list of participants from diverse backgrounds and from across the grade levels. When we pitched the idea to the girls, however, we were met with a great deal of resistance:

“Who else is going to be there? Because I have beef with a lot of girls here.”

“I prefer guys to girls. Girls will stab you in the back.”

The list of comments went on, but the message was clear: being in a room with a group of other females was an intimidating and alarming prospect to the girls we approached. They were happy to talk to the teacher facilitators because they trusted us, but they didn’t want to talk about anything personal around other teenage girls. The chances they would be betrayed were too great.

Being in a room with a group of other females was an intimidating and alarming prospect to the girls we approached.

We decided to meet with each girl individually to address her concerns, and to let each of them know that for all the differences between them, the experiences of betrayal and suspicion were something they all shared. In conversation with the girls, we learned that they’d participated in multiple school-led initiatives over the years that focused on teaching them how to “make nice” with other girls, and that they weren’t interested in repeating that process. What did interest them was the opportunity to share their thoughts on female friendship and some of the personal experiences that had shaped those thoughts.

The Girls Group was on.

What we found was that our girls had stories to tell. Stories about rejection and exclusion and competition and betrayal.

What we found was that our girls had stories to tell. Stories about rejection and exclusion and competition and betrayal. I can’t share those stories here, of course, but I can share that in the midst of all that negativity, something positive started to take shape. Stories about distrust were met with empathy, and the shared experience of rejection inspired acceptance.

The girls found that many of their feelings of isolation and rejection came from the belief that they were alone in their experiences. There was real relief in hearing about the struggles of other girls, and meaningful connections began to form between young women who’d assumed they had nothing in common with one another.

As we got to know and trust each other more, we began to tackle more difficult subjects. We talked about the pressures the girls were under – from family and teachers and peers and boyfriends/girlfriends. Teenage girls today feel enormous pressure to be perfect, and they expend a great deal of effort into creating the illusion of perfection in order to mask their insecurities and perceived flaws.

Teenage girls today feel enormous pressure to be perfect, and they expend a great deal of effort into creating the illusion of perfection in order to mask their insecurities and perceived flaws.

Social media plays a significant role in this process. Sites like Facebook and Instagram have replaced diaries and journals, and teen girls spend their time creating an image of themselves for public consumption. Their feeds tell a story about their lives – but a story that is more about the way they want to be perceived than about the way they really see themselves. One selfie a teenage girl posts on Instagram may have been chosen from more than thirty pictures she took of herself, but that didn’t measure up to her standards for perfection. Image has replaced authenticity, and the results are damaging. It’s more important to look like you’re happy than to actually be happy.

Vulnerability, we decided, is when we stop thinking about the image we’re projecting and let people see us for who we really are. It’s a risky endeavour.

Which brought us to the topic of vulnerability. Vulnerability, we decided, is when we stop thinking about the image we’re projecting and let people see us for who we really are. It’s a risky endeavor. When we have the buffer of image, we’re somewhat protected from the sting of rejection. If someone doesn’t like us, it’s not that they don’t like the real us. They just don’t like the version of ourselves that we’ve shown them.

When the girls in our group opened themselves up and risked vulnerability, they found that they were able to form real connections with one another. Safe connections. Because once they felt connected, they were much more likely to treat each other with respect, and much less likely to hurt or betray one another.

It was these experiences in Girls Group, as well as the work I’ve done with teen girls for more than a decade, that helped inspire my debut YA novel How It Ends . Like the teens I’ve been privileged to work with over the years, my characters Annie and Jessie have stories to tell. They are torn between who they are and who they want to be, and are hungry for meaningful connections even as they distance themselves from others out of fear of rejection.

I knew from the outset that I wanted to alternate between the perspectives of both Annie and Jessie, so that readers would have insight into each character and see the world through her eyes. Time and again in my job, I’m reminded that you can’t know someone’s story just by looking at them. Sometimes the people who seem to have it all are hurting more than we could ever imagine, and sometimes the most damaged-seeming among us have a surprising amount of strength. Both Annie and Jessie have hidden depths that influence the way they perceive themselves and each other. In telling the story from both of their perspectives, I hope to shed light on the complexities of their relationship and examine some of the pressures that teen girls face.

Female friendship is complicated and messy and risky and important. It means opening ourselves up and making ourselves vulnerable. But it also brings great rewards. I hope I’ve done justice to the topic in How It Ends, and that the story will inspire discussion among teens about their friendships, and about the challenges they face on the road to finding meaningful connections with other girls.

More like this
16 Novels That Paint A Realistic Portrait Of Abortion
By K.W. Colyard
5 Gripping Books To Read From Women’s Prize For Fiction Winner Ruth Ozeki
By El Hunt
Why You're Seeing Green Bandanas At Abortion Rights Protests
By Lexi Inks
GIRLI & Q Fell In Love At A Skatepark & Never Looked Back
By Jessica Morgan
Get Even More From Bustle — Sign Up For The Newsletter