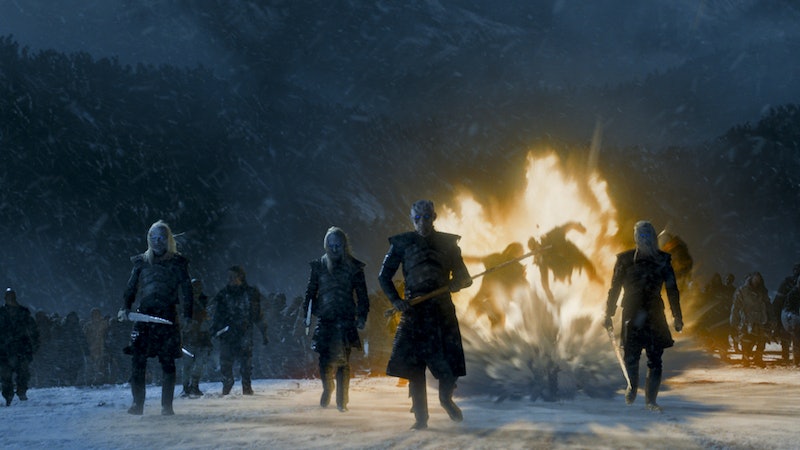 After years spent heeding the Stark family's ominous motto that "winter is coming," it would appear that, at long last, "The Winds Of Winter" are finally here. No, I'm not talking about the highly-anticipated sixth book in George R.R. Martin's A Song Of Ice And Fire series, sadly; that long-awaited to me still awaits a publication date. Rather, I'm talking about the Game Of Thrones Season 6 finale, which shares its title with that upcoming book, as was officially confirmed by HBO.com Wednesday.

The premium network has uploaded the titles of the season's final two episodes to its website, teasing the climactic events to come in the weeks ahead. After the seemingly Arya-centric hour "No One" next Sunday, the following two episodes will be titled "Battle Of The Bastards" and "The Winds Of Winter," respectively. No official descriptions have been provided yet for either episode, but they will both be directed by Miguel Sapochnik, the mastermind behind Season 5's jaw-dropping "Hardhome."

It seems pretty clear what's going to happen in the penultimate episode: the battle between Jon Snow and Ramsay Bolton for control of Winterfell that the entire season has been leading up to. But what's going to happen in the finale? Given how far off the beaten path of Martin's novels we've gone this year, it's almost impossible to predict what's coming. But given the super-sized nature of "The Winds Of Winter" — as well as the fact that it's named directly after one of Martin's books — there must be something huge headed our way, right?

It seems certain that, after the longest summer in recorded history, winter will officially arrive in Westeros. Perhaps the finale will end with a telltale shot of snowflakes beginning to fall on the typically sun-soaked landscape of King's Landing. But when the Starks say that "winter is coming," they're not just talking about the season; they're also warning about the threat that winter brings with it: namely, the White Walkers and their army of wights. Will we finally see the undead invasion of Westeros that the show has built up to for six years?

There's only one thing standing in the way of the White Walkers — literally. The Wall is enchanted to keep the Night King and his ilk out of the Seven Kingdoms. If he's to invade the continent, he'll have to bring the Wall down somehow. (In the books, that's likely to involve the Horn of Winter, which has yet to be introduced on the show.) What more shocking and climactic way to end Season 6 than with the sight of the stalwart and reliable Wall crumbling in an avalanche of ice, and thousands of wights pouring through into the unprotected land beyond it?

But given Episode 10's long running time, the North isn't likely to be the only storyline of importance in the finale. We've also got several highly-anticipated events that could conceivably come to pass before Season 6 ends: Dany finally invading the Seven Kingdoms; the death of Cersei's only remaining child; that vision of wildfire exploding beneath King's Landing; the fruition of Margaery's plan against the High Sparrow; Arya returning to Westeros; the revelation of Jon's true parentage; Cleganebowl (GET HYPE), and — of course — the possible return of Lady Stoneheart.

How many of these events can Game Of Thrones cram into one episode? We'll find out when "The Winds Of Winter" arrive on Sunday, June 26.

More like this
'GoT' Star Emilia Clarke Says She "Just Can't" Watch 'House Of The Dragon'
By Brad Witter
Taylor Swift Visited The 'Glee' Set For This Bizarre Season 5 Episode
By Grace Wehniainen
Netflix Shut Down 'Bridgerton' S3 Rumours About A “Very Dark” Storyline
By Bustle
Bill & Frank’s 'The Last Of Us' Episode Has Twitter Emotionally Wrecked
By Alyssa Lapid
Get Even More From Bustle — Sign Up For The Newsletter
From hair trends to relationship advice, our daily newsletter has everything you need to sound like a person who’s on TikTok, even if you aren’t.