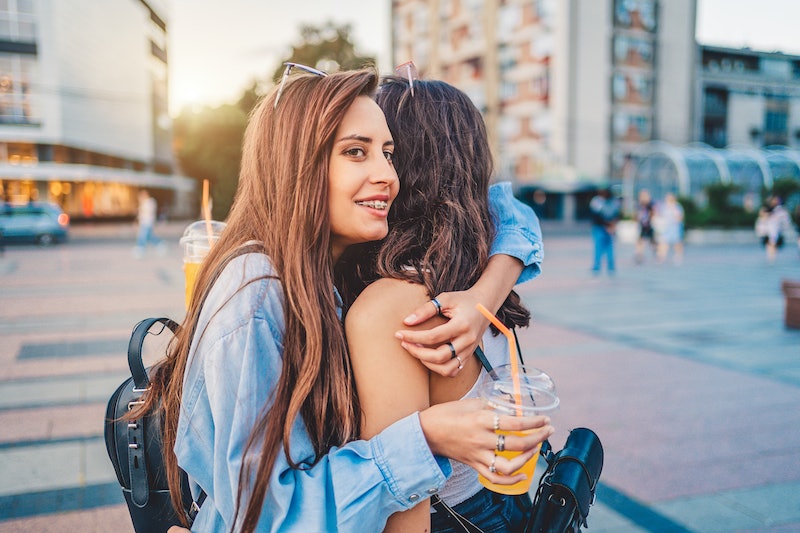 Feminism is increasingly being embraced in mainstream culture, which is awesome in a lot of ways, but does come with a few drawbacks. Like for instance, the fact that sometimes people in your life claim to be feminist but, deep down, aren't really. It's frustrating and it can be hard to spot, but there are signs you can look out for to make sure you understand what the situation really is.

Overall, I'm thrilled that feminism is becoming more widespread, and that so many people are openly identifying as feminists. We may not all always agree about the particulars when it comes to different approaches to feminism, but having the movement stay out on the fringes does no one any good. Like everything, though, there are downsides to this, particularly the fact that a lot of people now call themselves feminist — but they mostly seem to be feminists in name only.

This isn't to say that someone who isn't a "perfect feminist" (whatever that means) is faking their feminism. No one is perfect as a feminist. We are, all of us, constantly learning and growing and evolving in our understanding of what gender equality looks like and what steps we need to take to get there. We also all mess up sometimes because decades of internalized misogyny are not the easiest thing to just shrug off.

But there are feminists who are still growing into their feminism and then there are "feminists," both male and female, who call themselves feminist but aren't actually committed to anything feminists stand for. And as someone who has had friends that fall into this category, I can tell you that it can be an incredibly frustrating thing to deal with.

So, in case you're confused why your friend says they're a feminist but doesn't ever seem like one otherwise, here are six signs they may be a feminist in name only.

Their Words And Actions Don't Line Up

Feminism isn't just a label, it's also about actions. So if you have a friend who's prone to slut shaming or victim blaming or who tries to police gender norms or engages in any number of other sexist behaviors, they might not be as feminist as they claim.

Strictly speaking, anyone who believes in gender equality is a feminist, but if someone goes around operating according to a sexist worldview, chances are they aren't really about gender equality at all. Because actions can speak way, way louder than words. And because feminism isn't a title; it's a commitment.

They Think Of Feminism As "Trendy"

This one is especially common among girls and women, what with so many celebrities openly talking about feminism, either coming out for it or against it. And while that dialogue is important — and while it's always amazing to see more famous women use their platform to advocate gender equality — for some people it creates the impression that being a feminist is "cool" or "fashionable." And while I think feminism is pretty darn cool, it's also a lot more important than some new trend. Feminism is a political and social movement that seeks to correct major injustices in our society and it's been fighting that good fight for a long, long time.

Thinking of it as a "trend" is a sign that this person might not really care about feminism at all, just about the fact that it's currently "in."

They Care More About Being Seen As Feminist

This one is, from what I can tell, especially common among your guy friends. A lot of guys want to be feminist because they want to be good guys — which is as good a motive as any for getting into the movement. But for a lot of guys, this means that they care more about being seen as a feminist (and thus as a good guy) than they do about actually committing to feminist issues and dismantling patriarchy. So if someone seems very intent on telling you they're a feminist but doesn't seem nearly as interested in anything that's, well, feminist, they might not really be as invested in feminism as they claim.

I definitely don't want to imply here that everyone has to keep up-to-the-minute track of news on every feminist issue, or that everyone has to have the same view of things going on today in the news or with the feminist movement. But I have met a lot of people who claim to be feminist but also say they don't like... basically anything that feminism is doing today. It's easy to be proud of feminist accomplishments of the past, like women's suffrage or fighting to work outside the home, because to us those now seem like obvious good things. So if someone doesn't approve of modern feminism and the things we're fighting for today, it might just be that they aren't really as comfortable with full gender equality as they think; they're just comfortable with the amount we have right now. Because while we should be proud of feminism's history, we should also be proud of its present.

Their Feminism Is One-Dimensional

Feminism isn't just about what the movement can do for you, but what it can do for all women. Which means, sometimes, stepping outside your comfort zone and embracing experiences and issues that are very different from your own. Basically, this is why intersectionality is so important. Because people have many different identities simultaneously and thus experience intersecting forms of oppression, and we as feminists are here for the end to all of them. As Audre Lorde once wrote, "I am not free while any woman is unfree, even when her shackles are very different from my own."

So if someone calls themselves a feminist but only cares about issues that affect them directly, or even refuses to acknowledge other forms of oppression as important, then their feminism is more like self-interest than feminism. Feminism is for us all.

Like I said at the beginning, none of us is perfect, not as people or as feminists. You don't stop being a feminist just because you sometimes do feminism badly — but if you aren't willing to keep learning and growing, if you resist people's efforts to broaden your view, if you keep making the same mistakes over and over again without trying to change, then things are a problem. It can be hard to unlearn the many things our sexist, patriarchal society teaches us, but if someone isn't willing to try, if they think they can simply call themselves a feminist and not actually have to challenge any of their own assumptions, then feminism is just a label; it's not something they're committed to. Because none of us have to be perfect, but we do have to make a sincere effort to grow and learn.

And hopefully, if you have any friends who call themselves feminist but fit any of the criteria above, they will eventually come to grow and evolve and be truly committed to feminism. In fact, hopefully someday everyone will.

More like this
34 Quotes That'll Inspire You On Juneteenth & Beyond
By Syeda Khaula Saad and Siena Gagliano
How to Delete (or Pause) Your Hinge Account
By Emma Carey
How To Fight For Reproductive Rights, Based On How Much Time You Have
By Courtney Young
How To Protect Your Digital Privacy If You Need An Abortion Post-Roe
By Kaitlyn Wylde
Get Even More From Bustle — Sign Up For The Newsletter