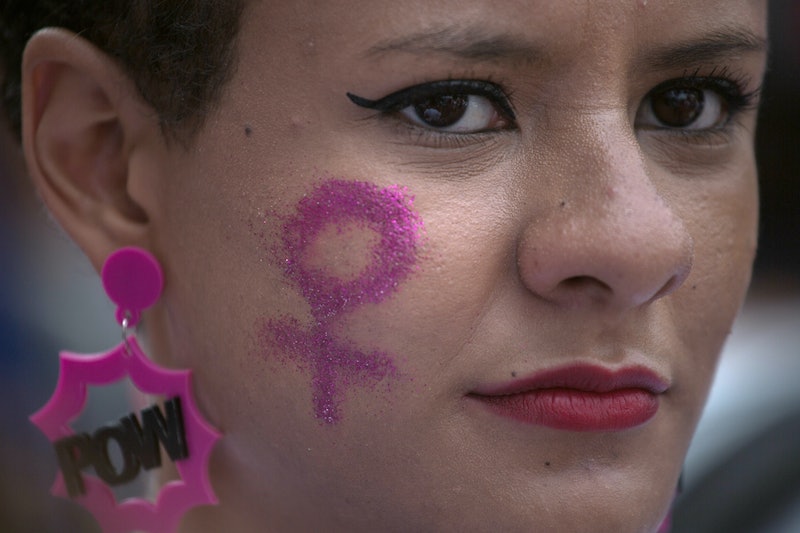 I have a confession to make: I'm a recovering white feminist. When I first discovered feminism, the issues that spoke to me were the ones I related to — i.e., the ones that affected white women. So, I'm guilty of saying many of the things white feminists say that end up universalizing their own experiences and silencing women of color. I didn't realize what I was doing at the time, since I was so sheltered and unaware of issues affecting people of color (because hello, white privilege); however, that's still no excuse for it.

The important thing to note here is that when we say "white feminists" or "white feminism," we're not talking about feminists who happen to be white — we're talking about White Feminism, the particular brand of feminism that fails to take intersectionality into account. Recovery from white feminism is an ongoing effort, but as I've learned about the subtle forms of racial oppression that we unknowingly perpetuate every day, I've seen a lot of parallels between the ways men can treat women and the ways white people can treat people of color — which makes feminism hypocritical if it refuses to deal with intersectionality, or the interconnected nature of things like race, class, and gender, which overlap to create entire systems of discrimination. Only by addressing all of these issues — not just one or two of them — can we achieve the equality for which feminism strives.

As a side note, this doesn't just happen with race. It's common for cisgender women to talk about feminism in a way that equates women with female bodies, for able-bodied women to describe their oppression using ableist metaphors, and for upper- and middle-class women to be oblivious to working-class women's needs.

When it comes to white feminism, though, here are some things we should really stop saying if we want our feminism to include everyone.

Many feminists have criticized the act of "mansplaining" — when men patronizingly explain things to women that they already understand, including their own oppression. Yet then, white feminists will turn around and engage in "whitesplaining," a parallel phenomenon in which white people try to tell people of color what isn't and isn't racist. But the best people to identify racism are those who have experienced it, and telling someone that what they've experienced is not racism is gaslighting. White feminists aren't entitled to a role in determining how various issues affect women of color.

2. "It's Not The Oppression Olympics"

The "Oppression Olympics" is a funny and sometimes useful concept to describe unproductive conversations centered on figuring out which group is more oppressed. However, it can be horribly misused to silence feminists who actually have experienced oppression differently due to their race. Since most white women have experienced oppression themselves, they might get defensive when others describe experiences that include other types of oppression in addition to sexism. But even if we haven't had an easy life ourselves, other groups have still had different experiences we probably don't even understand — and won't understand if we don't listen.

It's very convenient for a white person to claim that a microaggression they or someone else has committed isn't really about race. But someone on the receiving end of such comments can't pretend a racially charged comment or action is "not about race" — because race affects them every single day. When we criticize someone for bringing race into a conversation or calling out our own racism, we're prioritizing our "right" to feel good about ourselves above their right to be viewed as an equal. Being an ally requires believing a marginalized group about how certain actions affect them, even if those actions are our own. While it may be tempting to view accusations of racism as divisive to feminists, what's actually divisive is racism itself.

"Colorblindness" might seem like a way to unite feminists of all different backgrounds, but it usually just ends up obscuring racial issues that need to be addressed. A study published in Personality and Social Psychology Bulletin found that people who claim to be "colorblind" actually feel more threatened by racial equality. Another in the Journal of Social and Personal Relationships found that "colorblind" men are less likely to date black women. The implication? Ignoring race does not make you an effective anti-racist ally. And the fact is, race itself does not divide feminists. Racism does — and colorblindness may be just another form of racism.

Before we talk about how hip-hop music is degrading or hijabs and burqas oppress Muslim women, we need to genuinely understand where these customs come from and take a good, hard look at ourselves as well. Hip-hop music, for example, is incredibly multifaceted and can be feminist (have you heard Missy Elliott?), and there are egregiously sexist themes in country, rock, and other white-dominated genres. In the case of burqas and hijabs, many Muslim women actually feel that wearing a headscarf makes the statement that they refuse to be objectified. Other cultures might very well consider heels and bikinis to oppress women, on the other hand. Before we criticize other cultures, we need to engage with the people immersed in them. Their practices may have entirely different meanings from the ones we've ascribed to them based on our own values.

Easy for a financially privileged white woman to say. But the "boardroom feminism" that Sheryl Sandberg, Hillary Clinton, and other white women have been criticized for endorsing is completely alienating to those who lack opportunities to "lean in." In fact, women's struggles in the workplace often have nothing to do with their own behavior and everything to do with structural inequalities, especially when racism and classism come into play.

Any generalization a white woman makes about women and their cultural predicament might, in fact, really be about white women. For example, when we say "women make 79 percent of what men make," we obscure the fact that black women and Latinas make far less — the 79 percent statistic is what white women make with regards to what white men make. When we talk about purity culture and the pressure on women to be innocent, we often neglect the fact that black women aren't usually afforded the right to be viewed as innocent in the first place. And when we discuss white women's experiences of online harassment as if they're universal, we ignore how such harassment is so frequently racialized. There are so many nuances to misogyny that white women simply cannot be aware of through their own experiences, which is why it's so important for us to stop saying all these problematic things and listen.

More like this
Sandra Bullock, Girlboss Extraordinaire
By Matt Harkins & Viviana Olen
25 Quotes About Love To Share During Pride Month 2022
By Madeleine Aggeler and Emma Garza
Meet The Spice Company Founder Who Sees Chai As A Metaphor
By Madhuri Sathish-Van Atta
The 'Hocus Pocus' Sequel Finally Has A Release Date & It Makes Total Sense
By Shannon Barbour and Radhika Menon
Get Even More From Bustle — Sign Up For The Newsletter