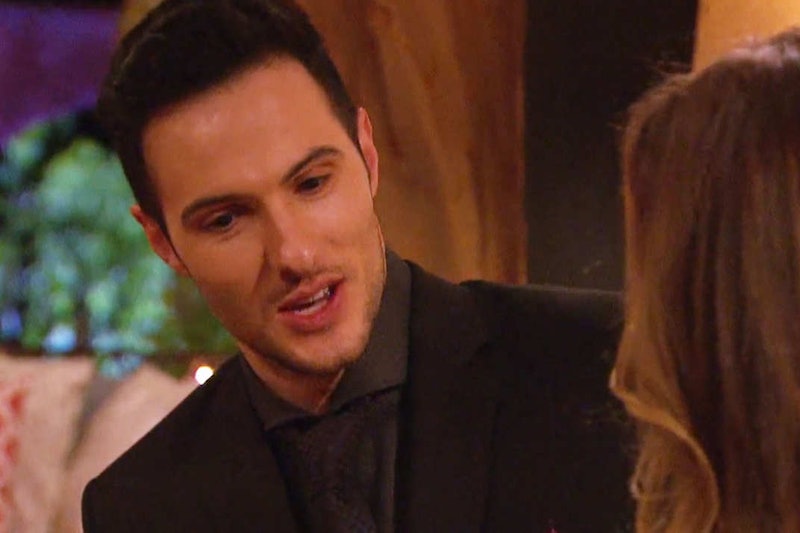 Here's an important life lesson. If you have to explain a joke, the joke probably isn't funny. Especially if that "joke" is actually an internet meme from like, months ago. Someone should have shared this piece of advice with Daniel, a contestant on JoJo's season of The Bachelorette, who's known, at this point, as the guy who shared a super painful moment with the leading lady on night one. (He's also known as the "Canadian" or "Chad's only friend" or, in my head, just "Tank top.") But don't be mistaken. This is not the first time a contestant referenced an outdated internet meme. Oh, wait. No, yeah. It is. I take that back. It isn't the first time, however, that The Bachelor/ette was uncomfortable to watch.

In my humble opinion, based on years of research (i.e. watching the show), The Bachelor/ette cringeworthy moments are unparalleled to almost any other reality TV show. Daniel's tone deaf "Damn, JoJo. Back at it again as the next bachelorette" joke — devastating as it might have been — was by no means the only excruciating thing viewers of The Bachelor/ette franchise have witnessed. For instance, the following 16 Bachelor/ette moments were more cringeworthy than the Damn Daniel incident of 2016. (Yes, it's possible.)

1. When Jesse Palmer Gave A Rose To The Wrong Girl

I've always wondered how they remember — or in this case, misremember — all those names. But Jesse. Come on, man.

2. When Jason Mesnick Dumped His First Choice For The Runner Up

As if being broken up with isn't bad enough already, how about this moment when Jason Mesnick dumped Melissa Rycroft after she already "won" the final rose. Then proceeded to choose his runner up instead of her. My heart. It's racing.

I appreciate Brad's commitment to being authentic and not just picking someone because he had to, but this double breakup was tough to stomach.

4. When Chris Harrison Confronted Rozlyn About Alleged Relations With A Producer

Rozyln Papa was booted from Jake Pavelka's season of The Bachelor when she was accused of getting too close to one of the show's producers (i.e. cuddle sessions and sleeping in his bed). We got to watch the uncovering unfold before our eyes, and let's just say it felt wrong for a variety of reasons. Especially considering that Rozlyn later told US Weekly that, "There was no making out! ...We're bogged down with confidentiality agreements, but I will say that it's a TV show and there's a lot more to that story and it has nothing to do with sex."

Oh, sweet Ashley. When Ashley Hebert fell under the spell of Bentley, little did she know all the terrible things he was saying behind her back. But we did. It was excruciating to witness her fall for him, only to have him turn around and tell the camera that he's going to make her cry.

6. When Jamie Otis Went In For The Lap Kiss

On Ben Flajnik's season of The Bachelor, Jamie Otis needed to get Ben's attention. She just might not have gone about it in the best way. In an attempt to make her move, Jamie laid it on thick. Real thick. It's too awkward to even try and explain, so just watch.

7. When Robyn Howard's Failed At A Black Flip

8. When Tierra Could Not Control Her Eyebrow

9. When Andi Confronted Juan Pablo After The Fantasy Suite

10. When Nick Viall Called Andi Dorfman Out For Having Sex

This moment was awful to watch.

I know what you did. This badlands scenario is the stuff of nightmares.

12. When There Were Two Bachelorettes

13. When Ryan Got All Horned Up Right Then

I miss Ryan. Does anyone else miss Ryan?

15. When Olivia Began Her Career As A Vegas Showgirl

Oh, Olivia. Kudos to you for putting yourself out there like this. You are a brave soul. A brave, brave feather boa wearing soul.

16. When Will Used An Elementary School Device To Seduce JoJo

JoJo was real into that. Sarcasm fully intended.

Here's to many more seasons — and thus many more terribly uncomfortable moments — of The Bachelor/ette.