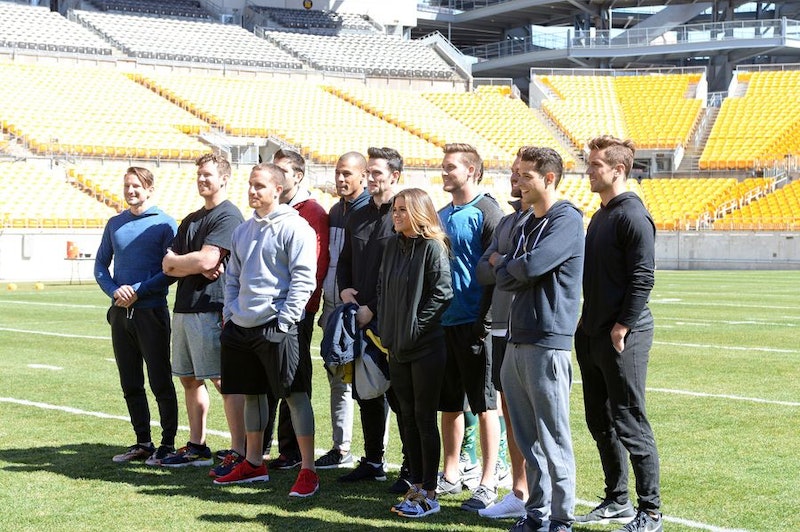 Reality TV is debatably not very real, as even Bachelor Nation must acknowledge. And though social media might also have some fictional elements, following the contestants of The Bachelorette on Instagram does offer insight into the "real" lives of the men pursuing JoJo Fletcher. JoJo has narrowed down the original 26 men to half of that, and, if you want to see how these men are living when they aren’t all bunking together in the same booze-filled mansion, then their Instagram accounts give you some photographic evidence of their lives outside of The Bachelorette.

Unlike Twitter, which Daniel and Derek aren’t on, all of the remaining contestants are on Instagram — even if some of them just joined because of The Bachelorette. Many of the men have solid followings, like Jordan who understandably has the most followers with over 200,000 since he was an NFL quarterback and has an even more famous brother. Other suitors aren’t so popular, but JoJo didn't choose who to give a rose to based on their Instagrams. And neither should you — although some of their accounts will definitely make you feel... let's just say differently about the men of The Bachelorette.

Checking out their Instagrams, I ended up liking some of the guys more and some of the guys less. But see for yourself who has the best social media presence by following the Instagram accounts of the remaining men on The Bachelorette.

Marine Alex is fairly new to Instagram, but he has been posting multiple times a day since he joined, including this shot of him as an uncle.

OK, Chad is technically off the show, but that doesn't mean you shouldn't want to follow the villain of this season of The Bachelorette on Instagram — especially since he posts hilarious fan memes and uses the hashtag #MakeTheBachelorGreatAgain.

JoJo's yoga buddy has a decent amount of inspirational posts, but what's more surprising is the amount of photos of lions he posts. He evidently likes the majestic animal a lot.

Like Chad, JoJo did not give Christian a rose and he's off the show. But with behind-the-scenes posts like the one above, you should definitely know about his Instagram game.

It's always cute when the men of The Bachelorette bond after the show, as Derek showed with this pic of Nick B. and him bro-ing out in Las Vegas.

Daniel doesn't show off his body on his Instagram as much as you'd think he would, but of course he still can't help showing off sometimes.

If you've been doubting the existence of Evan's children, there is proof on Instagram of him being a dad — even if Evan doesn't post very often.

Along with many photo shoot shots, Grant also provides helpful reminders that he is a firefighter on his Instagram.

Turns out James T. isn't the only James with musical talent. Besides showing his guitar and singing skills, James F. highlights the fitness facility he owns.

Why no one constantly talks about how this guitar playing suitor has the exact same name as the "Fire and Rain" singer is beyond me. James Taylor advertises his budding musical career on Instagram, if you want to catch him play live.

Since there's always a lot of talk about Jordan's family members (most notably his NFL quarterback brother Aaron Rodgers), his Instagram post featuring his dad is particularly appropriate.

Wait! How many men on The Bachelorette play the guitar? Turns out Luke is another suitor with musical skills.

Just like playing the guitar, most of the men on The Bachelorette also love a shirtless selfie, as Robby displays.

If the guitar isn't JoJo's thing, then there is always Vinny, whose Instagram reveals that he's a DJ that goes by the name VinSane.

Wells, another professional DJ for a radio station, is the guy I most likely would choose if I were in JoJo's position, and his Instagram only helps confirm that. He uses it to promote his support of the Nashville Humane Association.

Following the guys of The Bachelorette on Instagram allows you to keep track of your favorite contestants — in a totally not creepy way — even after JoJo dismisses them for her love life. What more do you need?