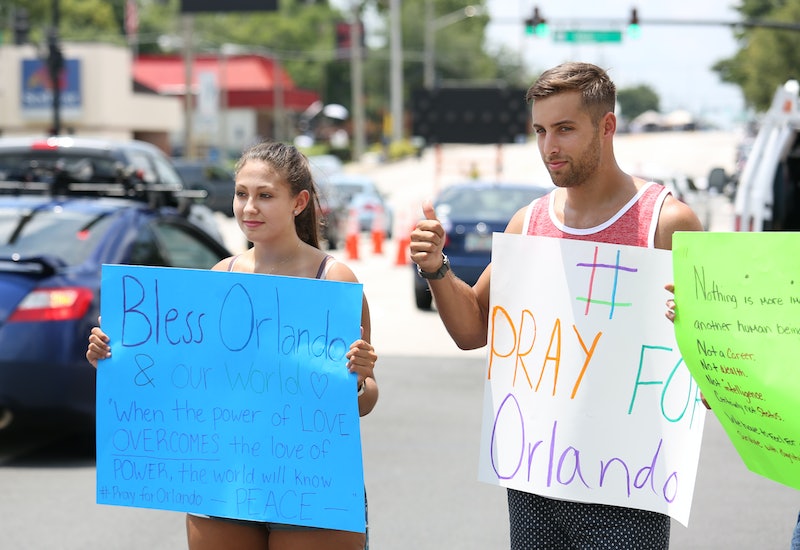 In 2015 alone, there were 372 mass shootings. Of all shootings in 2015, 13,286 people were killed due to firearm violence, and 26,819 were injured. The rate of gun murders per capita in the U.S. is almost 30 times that number in the UK. Despite Obama's executive actions regarding gun control in January of this year, the U.S. still has a serious problem.

That isn't to say that prayers mean nothing. A sense of empathy is the first step in helping others. But the only response that can prevent another shooting like this is one that involves action, especially legislative and practical change. Here's what you can do to take part in limiting gun violence and shooting deaths in the U.S.

Groups dedicated to rooting out gun violence exist across the country, and you can get involved on both a state and federal level. Through these groups, you can write and sign petitions, attend protests, and find out about other anti-gun violence events. Here are some of the most prominent organizations:

Yeah, I know. This old chestnut. But the significance of actually picking up the phone or the pen is that your representative or mayor's office will actually know how you feel after you do this. They won't know if you just talk about your anger with friends in passing conversation, and they probably won't know if you tweet about it.

This site will find contact information for local, state, and federal politicians, and this one provides advice for writing letters to elected officials. To sound compelling, mention a specific bill or law that's about to go into effect/already is in effect where you live.

If you live in or near Orlando, please consider donating blood to OneBlood, a blood donation center that put out a call for O negative, O positive, and AB donors after the shooting occurred. It's currently at capacity right now, but expects to need donations throughout the week. Even if you're not based in the Orlando area, mass shootings are statistically likely to take place every day in the U.S. Your blood could help save the life of the next shooting victim.

4. Get Educated, then Vote

If you're a citizen of the U.S., voting is one of the best ways to influence legislation surrounding gun violence. Using sites like On The Issue, you can check the voting records and public statements of all candidates you may be voting for, whether on a presidential, statewide, or municipal scale. You can figure out what they've said and done about gun violence, thus informing your vote.

This one isn't gun violence-specific, but helping these organizations helps the people directly affected by the shooting. The LGBT community is hurting in the wake of the attack, which took place at Pulse, a gay nightclub that provided a gathering spot for the Orlando LGBT community. You can donate to Orlando LGBT organizations, such as the Orlando Youth Alliance, which will provide crucial emotional support to those in Orlando who have been shaken by the shooting. You can also become involved at a local level. If you're not familiar with the LGBT groups nearest you, use Centerlink to discover the names and contact information for organizations you can reach out to.