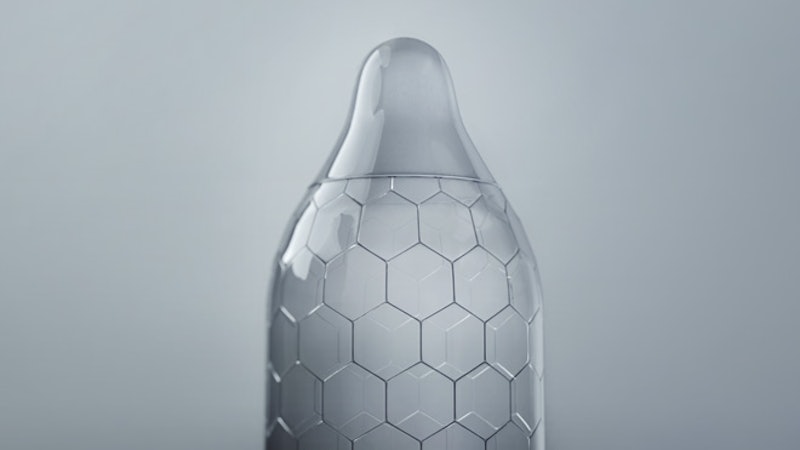 So why aren't people using condoms? For one thing, folks complain that they "ruin the mood" (even though they take a minute to put on), reduce pleasure (even though a 2014 Trojan survey of 1,000 American adults' condom use and attitudes found that 50 percent of women don't fully enjoy sex without a condom), mess with erections (which even science says is false), or think "It won't happen to me" when it comes to STIs and unplanned pregnancy (also clearly BS).

So how do you remove the stigma around condoms and make them appealing? Re-engineer the condom, says luxury sex toy brand LELO. Today marks the launch of LELO HEX, a new condom that is structurally different from others and aims to fix a lot of common complaints — and it's pretty sexy, to boot.

"The challenge was to make something radically different with a material already approved for condom use," Filip Sedic, Inventor of LELO HEX and founder of LELO, said in a press release. "We did this because people need to be having great, safe sex today, not 10 years from now. That’s why all the talk of new condoms has never resulted in a revolutionary design making it onto store shelves. Talk is talk, but innovation is what really changes things.”

Here's what you need to know about the new condoms made to revolutionize sex.

1. Charlie Sheen Is Endorsing It

Sure, it's a controversial partnership, given his past behavior, and Sheen even pointed out at the event that people were probably wondering why he was going to discuss the importance of condoms. But after Sheen announced that he is HIV positive last year, he opened up an incredibly important conversation and got the world interested in sexual health. In fact, Google searches for HIV symptoms and testing skyrocketed after his public announcement.

"We wanted a partner who was truly engaged on the topic, and would be able to engage a wider audience," Steve Thomson, LELO CMO, said in the press release. "Charlie's personal condition is of course a tragic reflection on sexual health today, but he is also a symbol of change with the strength and courage to confront key issues head on ... we believe his participation will help drive safe sex and innovation to the forefront."

2. Here's What They're Made Of

HEX condoms are inspired by Graphene, but they're made of an internal hexagonal web compromised of 350 individual hexagons over a thin latex surface.

“There’s a reason honeycombs are the shape they are, and why snake scales move the way they do," Sedic said. "It’s because hexagons are strong, symmetrical, and tessellate perfectly. They’re one of nature’s go-to shapes for anything needing to be at once lightweight and incredibly strong. That’s why the structure of Graphene – the thinnest, strongest material we know of today is … you guessed it, hexagonal.”

3. They're Supposed To Stay Put During Sex

One way LELO says HEX is different from other condoms? They're designed to minimize slippage. The web structure is internal, not external, meant to grip the wearer.

The company says that HEX's Graphene-inspired structure provides thinness and strength. At the event, I watched someone prick HEX with a needle repeatedly like in the GIF above, and it did not tear then either.

5. They May Provide A More Natural Feeling

LELO says that HEX's raised inner structure is meant to mold to the wearer, so it may offer added sensitivity and a more natural feeling.

6. They Were Seven Years In The Making

7. They're Launching With A Project Called "HEX Appeal"

Starting today, a two-month project called "HEX Appeal" will offer 10,000 backers the chance to order the condoms before anyone else. LELO hopes these first customers who experience the condom will encourage conversations around sexual health. You can order LELO HEX for $12 for a 12-pack. This price will change to $19.90 once HEX Appeal is over.

"These are not your grandfather's condoms," Sheen said at the launch party. And considering the usage rates and stigma around condoms, I'd say that's a good thing. Whether or not these re-engineered condoms will actually change the public's opinion or behavior remains to be seen. But creating something different and getting people talking positively about safe sex is a step in the right direction.