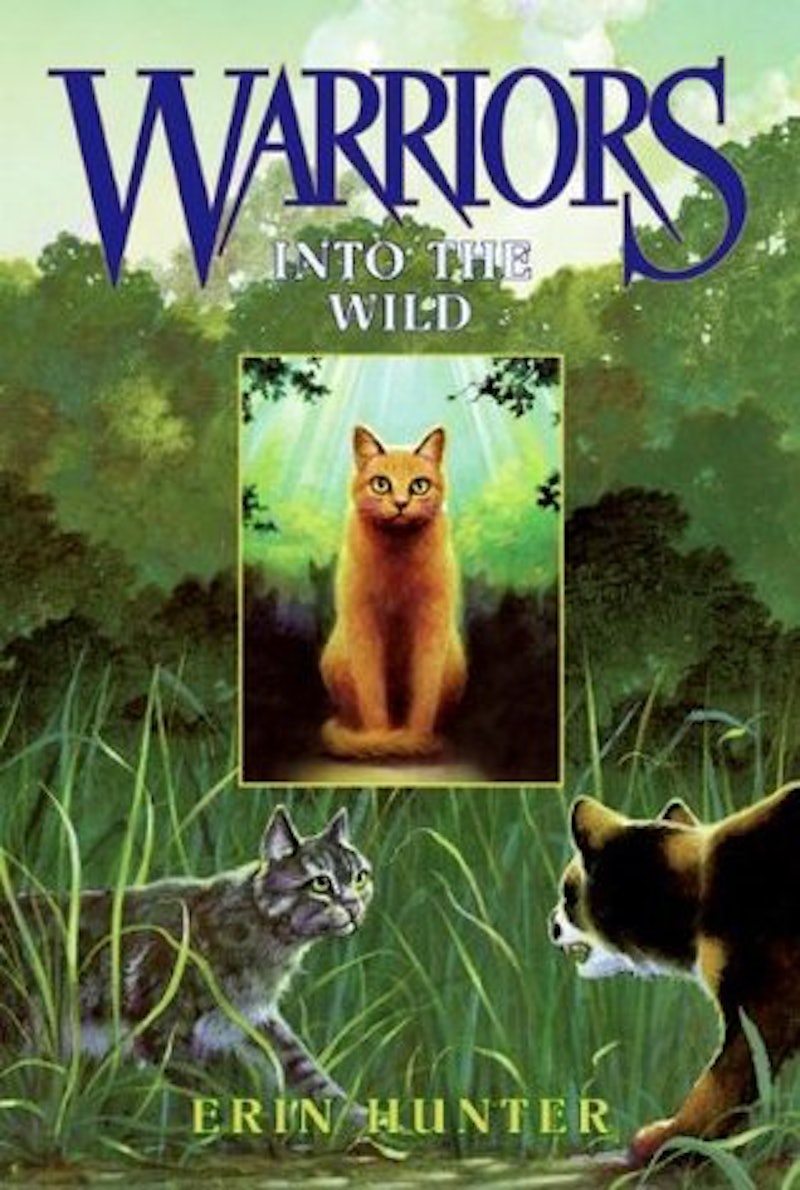 I have a vivid memory of sitting in my elementary school's "indoor playground" (an empty room where they kept the children when it was too cold for recess outside), with my two best friends, reading Warriors: Into the Wild. That is, I was reading the book with my two best friends: we only had one copy between the three of us, so we'd all crowd around the book to read one page at a time. Once all three of us had finished a page, we'd turn to the next page. And that's how we read the whole book. So I think it's safe to say that we loved the Warriors Series as kids.

We were so dedicated to Fireheart and his warrior cats, that our teacher had to take us aside and tell us that we were required to read at least one book with a human protagonist. We felt this to be deeply unjust. Because, if you read the Warrior Series, you know that they weren't just silly books about cats. They were wildly complex novels filled with political intrigue, religious warfare, forbidden love, and violent cat death. They were terrifying and upsetting. And we loved them.

Now, I've been away from the Warriors Universe for several years. I don't know much about the five sub-series that came after the original series (which are still ongoing), or the extra novellas, or the manga. I don't remember who the hell Hollyleaf or Lionblaze are. But I remember the original books, and what made the series so distressingly good:

1. It was about cats

CATS! Cats are great. If you don't like cats, I don't want to hear about it (can we please end the false binary with cats and dogs? You can like both, I promise). These books were written for kids who loved cats, and who enjoyed imagining what kind of political hierarchies cats might construct for themselves. Even if you weren't already a die-hard cat person, this book made you respect cats and their strict code of honor.

2. It gave us a healthy fear of cats

Even cat lovers should have a very slight fear of cats. Cats aren't our loyal servants. They've entered into a mutually beneficial business relationship with the human race, and that's it. The Warrior Cats had their cutesy, cuddly moments, sure, but they could be really violent. Not just killing voles and getting into cat fights like real cats—the Warrior Cats would plot to murder each other and launch all-out military campaigns (and doesn't Brightpaw get her face ripped off by dogs at one point?).

3. It was basically Harry Potter, but with cats

Rusty/Firepaw/Fireheart/Firestar was Harry (a little orphan prophecy kid who joins a secret hidden world). Graypaw was Ron. Ravenpaw was Neville, I guess. Sandwhatever was Ginny. But mostly, the four clans weren't far off from the four Hogwarts houses: Thunderclan was full of brave cats, Shadowclan was full of shady, power-hungry cats, Riverclan was full of smart cats, Windclan was full of well-meaning cats who got bullied (sorry, Hufflepuff). And Bluestar was a total crockpot mentor with a secret past like Dumbledore.

The several authors behind the pseudonym of Erin Hunter did not skimp on details. We could have intense playground discussions on the naming conventions of the four clans, the lineage of various kits, and the contested territory of Sunning Rocks. Each book came equipped with a map and a Game-of-Thrones-style character list, so you wouldn't mix up Runningbrook from Windclan with Runningnose from Shadowclan.

And I mean Shakespearean level political intrigue and Star Wars level fake mythology in this children's series about cats. "Loyal" Deputies plotted to assassinate Leaders. Love-kits were born to mixed clan heritage. Allegiances flipped and Warriors fell for Medicine Cats (strictly forbidden!). Cloudtail was considered heretical for his lack of faith in Starclan. There was always some kind of politically-fraught tension to keep you interested in these feral cats and their theocratic government.

6. Fireheart was kind of hot

Look, LOOK, I'm not saying that I find cats attractive. All I'm saying is that I kind of imagined older Fireheart/star as looking like Thomas O'Malley from The Aristocats. And Thomas O'Malley is definitely hot as far as animated cats go. Right? Yes? Anyone? Moving on...

7. We all spent hours picking out our warrior cat names

Those names, man. They were so convoluted, and yet so right. According to a Buzzfeed quiz, mine would be Stormberry (I'd like to see this quiz-maker's Warrior credentials, please). We argued over what names our favorite apprentices would get when they switched out "paw" for a Warrior suffix (I'm still mad about Cloudtail's name because Cloudfur would have been BETTER), and we picked out cat names for all of our friends and enemies.

Kittypet. Twolegplace. Thunderpath. The Warriors Series rivals most space operas and fantasy epics for use of fake slang to talk about normal things. It wasn't hard to get the hang of the cat-speak, and once you did you felt like you had your own secret (very nerdy) language with your fellow Warriors.

9. It taught us that morality can be complex

It wasn't the only book series to show us that the world isn't split neatly into good and evil, but it was the first one to do it with cats. Just when you thought you'd figured out that Thunderclan was all good and Shadowclan was all bad, some cat would roll up to complicate things. Or Bluestar would go from wise leader to paranoid wreck. The clan divisions were deceptively simple.

10. Adults assumed it was a cute book series about kitties

Little did they know that so much of the plot hinged on religious fanaticism and kittens born out of wedlock. The characters may have been furry, but the books addressed everything from political corruption to friendship to the divine right to rule. Those books spawned a thousand unfortunate Deviantart pages, and a lot of useless debate over cat names, but they were also completely absorbing tales of morality, spirituality, and feline bravery.