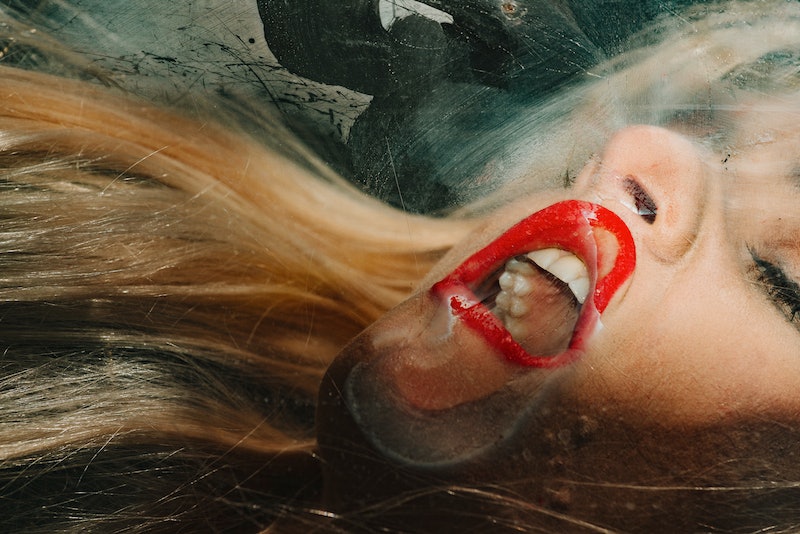 If you ask any New Yorker, they’ll tell you that New York is the greatest city in the world. As a New Yorker, I’m going to agree with that sentiment tenfold. Because New York is loved by millions and dreamed about by millions more, love letters to the city are not uncommon — and sometimes those love letters come in the form of books like F*cking New York.

Inspired by Carrie Bradshaw’s “one great love,” as she called New York in Sex in the City, photographer Nikola Tamindzic asked himself, “If you’re in a relationship with the city itself, what about sex? What would f*cking New York feel like? What would it look like?” From there, Tamindzic wrangled up models, actors, writers, political activists, and others interested in the subject to showcase exactly how these people, who are so in love with New York, would essentially f*ck it. The result? A gorgeous and sex-positive ode to NYC.

Each woman is f*cking New York in her own way, on her own terms, creating a theme of not just pleasure but sexual agency. It’s bold, provocative, and sexy, and each image isn’t just a testament to the love affair New Yorkers have with their city, but how sexual pleasure can be found in places you least expect.

Here's what you should know about F*cking New York. (And how to get it.)

1. It’s Only Available On Kickstarter

If you’re thinking about running to the bookstore to get your copy of F*cking New York, hold up. The only place you can get it is on Kickstarter — and only until June 21.

2. It’s About Pleasure And Pain

"I’ve always been fascinated with that ambiguous area where sexual ecstasy, spiritual rapture, and physical pain meet. Bernini’s Ecstasy of Saint Teresa is a classic example," Tamindzic tells Bustle. "The fact that an O-face is more or less indistinguishable from agony, or the way the word 'passion' itself describes both ecstasy and pain. Obviously, that kind of work runs the risk of getting really self-important real f*cking fast, so F*cking New York was a perfect way to pop the cork and let the hot air out, as it were."

As Tamindzic explains in the trailer for the book, it’s about the relationships that women have with NYC and how they express the love they have for it. And, because every love affair includes sex, F*cking New York examines the expression of that love on a sexual level, allowing women to perform acts and pose in positions that reveal how they’d f*ck New York, if they could.

Although men were originally meant to be part of the project, the interested parties sort of drifted out of the picture. There was also the fact that society views a man naked and humping a sidewalk a bit different than a woman doing the same. "When working with women, the worst I ever got from passing cops was a thumbs-up. Seriously. No one cared," says Tamindzic.

There's also the matter of what our culture "allows" for men and women."It’s sad, because the position of privilege also makes you less inclined to question the setup, so you go through life missing out on things that are not 'manly' enough, always under this pressure to conform," he says. "Having second thoughts about participating in F*cking New York is obviously far on the benevolent end of the spectrum, but you can see the roots of virulent anti-feminism in a kind of deep, unconscious, unquestioning investment in certain gender roles, and absolute hatred for anyone even hinting that your investment may be misguided, to say the least."

5. It's About Female Sexual Agency

As Tamindzic explains: "Once men were out of the picture, the theme shifted to female sexual agency: what is our culture so afraid of when it comes to female sexuality, and agency in particular? What’s so scary to so many people (in art, and in life) about a woman who seeks out and experiences life and pleasure on her own terms, whose purpose isn’t just to service a lover? And what is it about the idea of sex with the city that was instinctively understandable to women, but not men? (There’s a documentary called Married to the Eiffel Tower that gets much deeper into this.)

"Having the city itself as object of desire became a roundabout way of zeroing in on each participant’s undiluted sexuality: if the camera is out of sight, then you’re not performing for the camera anymore; if there’s no human partner to interact with, you’re free from performing for them. What you’re left with is what you want, what you are. Being offered a space in which to be truly yourself, free from judgment and shame, is what many participants described as their primary motivation to join the project.

"It all brings to mind Nicole Kidman’s character from Kubrick's Eyes Wide Shut: '…and for women it’s just about security and commitment and whatever the f*ck else! If you men only knew.'"

If you’ve ever met a die-hard New Yorker, you already know that they really, like REALLY, obsessed with not just being New Yorkers but with their beloved city. In F*cking New York , Tamindzic pokes a bit of fun at that hardcore love and obsession we have with our city, and as much as the images are provocative and gorgeous, they’re also humorous.

7. It's About Sexually Charged Domination

As actor and F*cking New York participant, Catherine Corcoran, explained: "I think people come to New York for one of two reasons: you either come to be swept up in the magic and energy that is the city, or you come to kind of conquer it and dominate it, both of which are really sexual impulses just in the nature, psychologically. So, drawing the parallel between that and my own sexual experience was pretty effortless, because there's all this — especially as a young woman — fear and anxiety that you need to conquer, not only within your sexual life, but also within your New York experience."

"There’s a certain attitude that comes from having spent my 20’s in war-torn Serbia; after ten years of civil war, and a four-month NATO bombing of my hometown, I had to get out, but what that leaves you with is a certain appreciate of pure joyfulness," says Tamindzic. "F*cking New York is a celebration of the ecstasy of sex, yes, but also just the sheer ecstasy of life."

F*cking New York is about how the women in the book wanted to communicate their sexuality and did so on their terms. Image after image is a woman freeing herself from the constraints of society's idea of how a woman "should" be, and it's all done against the greatest backdrop you’ll ever find: New York City.

“Being able to kind of put my sexuality out a little bit, but in a way that's beautiful, playful, and also mysterious at the same time, even though it is exhibitionistic it is mysterious, because it invites questions and analysis,” said artist and participant Samantha Ylva Beasley.

10. It's Feminist At Every Turn

From sexual agency to sex-positive themes to a very pregnant model to feminist entrepreneur and founder of the networking site theli.st, Rachel Sklar, normalizing breastfeeding with shots of her all over the Lower East Side, F*cking New York is painfully feminist.

"Feminism, as 'the radical notion that women are people,' gave us the freedom to do whatever we like, together, as equals, and consenting adults; to choose to do whatever we wanted: to seduce, or educate, or objectify, or shock, or turn on, or be funny," says Tamindzic. "Where we fall is left for the viewer to decide, and it will depend on their personal context, be it generous or toxic. But I think I can speak for my collaborators as well as myself when I say that striving for equality and consent was a way to counterbalance a certain type of obsolete male domination that hurt both men and women."

Sklar agreed: "It didn't occur to me that it wasn't a feminist thing to do this. I think... I'm a person, I'm a woman, I have agency, nursing is natural and awesome, I'm proud of it... Yeah: feminist."

At the end of the day, F*cking New York is about more than New York. It’s about something even bigger (if that’s possible). What is that big thing? Women’s sexuality. We still live in a world where women being seen as sexual beings is a struggle. We’re seen as objects, but not as equals in many realms, most notably our sexuality. This is a problem. We’re just as sexual as men and our desire for pleasure is just as important. Nikola Tamindzic knows this; he’s created a work of art that speaks volumes and comments on a social stigma that needs to be destroyed.

"My collaborators are far more qualified to talk about that, but personally, I hope the book is an example of men and women working together on a sexually-charged project that doesn’t fall into the same old sexist objectification patterns," says Tamindzic. "We discussed our fascinations and desires, and then worked together to give them form and to make them real. Simple as that."

The heart of the matter is that women like to f*ck… and some of us like to f*ck New York.

More like this
35 Sexy Texts To Send Your Partner
By Griffin Wynne and Carolyn Steber
16 Novels That Paint A Realistic Portrait Of Abortion
By K.W. Colyard
GIRLI & Q Fell In Love At A Skatepark & Never Looked Back
By Jessica Morgan
How Getting An Abortion Has Changed From The ’60s Through Today
By Amanda Chatel
Get Even More From Bustle — Sign Up For The Newsletter