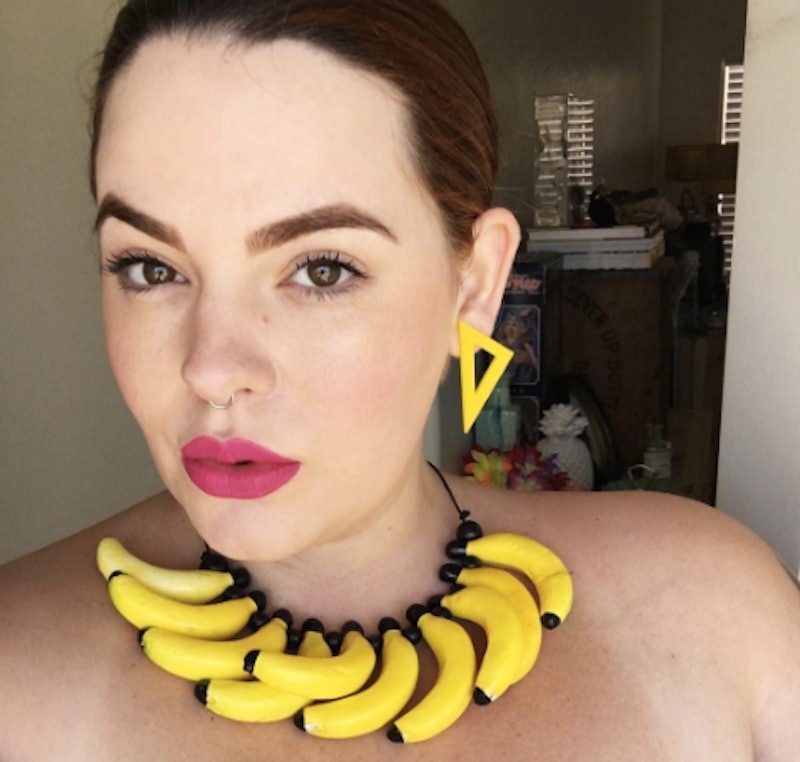 Anyone who has ever felt different — like an outsider — can likely attest to how much David Bowie influenced them to embrace and celebrate their "otherness." So when news broke that Tess Holliday gave birth to a baby boy, some of us began to speculate as to why Holliday named her baby Bowie.

According to People, "Son Bowie Juniper Holliday weighed 8 lbs., 10 oz., and measured 22 inches long," and according to the plus size model's rep, Bowie was born on Monday, June 6. It's not necessarily a new idea for celebrities to pick out unique and non-traditional names for their children. But could there be something more profound behind the name "Bowie?"

The world lost David Bowie in Jan. 2016, much to the heartbreak of fans everywhere. But while he was a rock 'n' roll god, he was also a symbol of empowerment and individuality for many who didn't feel like they fit into the status quo. Not only was Bowie an androgynous icon and a symbol for many within the LGBTQ community, but he spread a message of acceptance and inner strength throughout his life.

And as many of us know, Holliday spreads a similar message by being an advocate for positive body image and a prominent plus size model. She is constantly championing for the right to accept and love your body no matter its size, helping give a voice to many marginalized by cultural norms and standards. At the time of Bowie's tragic passing, Holliday openly mourned his loss.

In an article by Bustle's Associate Fashion & Beauty Editor Marie Southard Ospina, she shared how Bowie affected her sense of body positivity, explaining, "I began to understand that being an underdog wasn’t such a bad thing. Being a weird fat chick who listened to too much Ziggy Stardust and read too many books and couldn’t quite click with the rest of her peers wasn’t such a bad thing. Bowie was an activist for outcasts, an idol for vagabonds, and a reminder that, even when it didn’t seem possible, changes were inevitable."

While Holliday hasn't yet offered any explanation as to the reasoning behind choosing such an iconic name for her baby, one can only speculate that it has to do with the kind of person Bowie was. He championed for those who society didn't want to accept, and gave many of them a sense of hope that one day they could be respected and loved as much as their normative peers.

Who wouldn't want to wish those kinds of stellar traits onto their own kids? Whatever the reason that Holliday and her partner Nick Holliday chose the name, it's definitely a beautiful one.