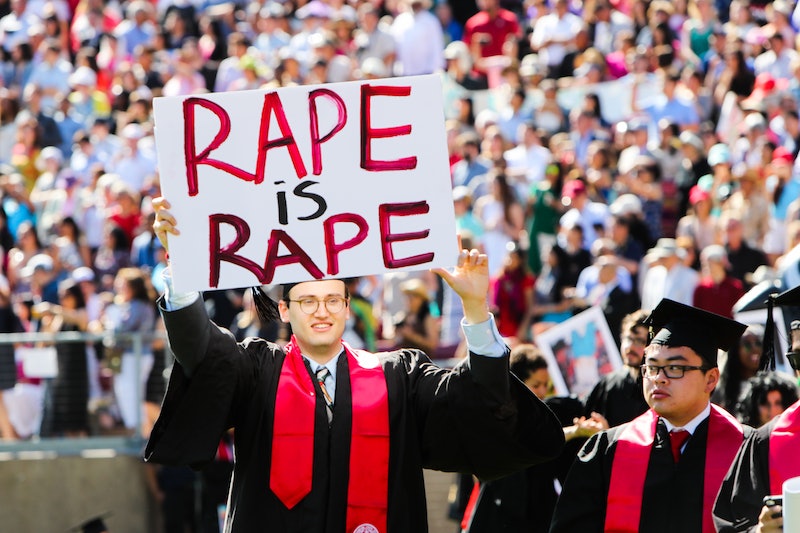 Whether it was because of the horrendously short prison sentence received by Brock Turner, the rapist in the Stanford rape case, or the intensely beautiful, brutal, brave letter read to Turner by his victim, the court case will now be one of the defining moments of 2016. It's attracted huge media attention, rage across all forms of social media, intense discussions in politics, and pledges to do better. But, like all media storms, it is gradually draining away, quickly overshadowed by new atrocities. The conversation started by Brock Turner's survivor has been an extremely positive, angry, powerful one: how can we keep it going?

It's not as simple as just talking about it long after the cameras have gone home. Turner will go to jail, the think pieces will dry up, the victim will wake up every day with her unbelievable burden, and we'll all wonder what else there is to say. To engage with rape culture on a constant and vigilant basis means being attentive. It means listening to the way people talk about rape, about sexual assault, about victims and perpetrators, about deserving it and safety, and what affirmative consent actually means.

Want to know how to continue the conversation Brock Turner survivor started? Here's a primer. Let's keep this anger and bewilderment going long after Turner's unspeakable mug has faded from our mind's eye.

What is "rape culture"? It is, at essence, a culture that interrogates how a victim could possibly let themselves get raped (or, worse, invite it) rather than interrogating how a rapist could decide to rape somebody. An excellent working definition comes from Women Against Violence, which is "the ways in which society blamed victims of sexual assault and normalized male sexual violence." And it shows its ugly face every day, in the way that mainstream media focuses on the "bright careers" of accused rapists rather than the ruined psychological futures of their victims, in the way that people comb through the actions of a rape victim despite the fact that nothing excuses or condones or invites rape. Not clothing, not drunkenness, not walking down a dark alleyway at night, not being flirty, not anything.

If you want to keep up the momentum of the rage around Brock Turner's astonishing and profoundly brave victim, keep noticing this. Keep talking about it. Keep making it clear that it is not acceptable. Tell news organizations, tell your friends, tell your coworkers. Do not let rape culture be a normalized part of your conversation.

If your own automatic reaction to accusations of rape is to target the victim and wonder if they're telling the truth, or if there's a grey area in some way, be aware of that impulse, and where it comes from. (Hint: it comes from rape culture.) Make it your first instinct to believe the bravery of the people who come forward to reveal being subject to such a traumatic, deeply invasive act.

Part of the difficulty with rape culture, I think, is that it often feels vaguely foreign. It doesn't happen to "nice girls," or "well-behaved boys," or "in the place where I grew up". Even if you don't feel that way, I can predict that some people around you do, which is why knowing the statistics about sexual assault in the United States, and being open about them to as many people as possible, is a vital part of the conversation.

And they're brutal. RAINN estimates that a sexual assault happens in America every two minutes. One in every six women will be the victim of rape or attempted rape in her lifetime. Ninety percent of all adult rape victims are female. One in three college men in a survey said they'd sexually assault a women if they thought they could get away with it. Women aged 18-24 on college campuses are three times more likely than the general population to experience sexual violence. This is happening here, now, to people you know and love.

Although the problems of rape culture in the Western world are particular and extremely troubling, rape culture is a spectacularly problematic issue for women worldwide. Just this week, a Dutch woman was jailed in Qatar for "illicit sex outside of marriage" after telling police she was raped. The World Health Organization estimates that a whopping 1 in 3 women worldwide will, at some point, experience physical or sexual violence in their life, whether from their partner or from a stranger. And the incandescent fury in India in recent years about numerous assaults on women, and the victim-blaming reaction in politics and the media, demonstrates that the U.S. is not alone, or even in the minority. What's happening here is happening around us on the local level, but it's also bigger than our own communities; it's a giant problem worldwide. We need to remember that, and do what we can to help.

5. Be Prepared To Encounter Boredom And Resistance

As the Orlando massacre this weekend has emphasized, there is never a shortage of tragic, bitter, horrible events to crowd the consciousness of the modern person casually reading the news. The problem with this cavalcade of horror is that it's easy to forget what is, technically, "yesterday's news". Keeping the idea of rape culture and its corrosive societal impact in the spotlight long after the think pieces have stopped being published is a fight against public attention spans and general boredom.

Be a bore about this. Talk about it even though people roll their eyes at parties. Write about it, protest about it, be engaged with it. Unfortunately, the likelihood is strong that another shocking assault will happen soon, and that it'll all be thrust onto our television screens again, to grab at our eyeballs for 10 more minutes. Don't wait for that to happen to care or try to change the culture.

It's as Vice President Joe Biden said: changing rape culture will require all of us. And that means getting politically active. Express solidarity with victims, and make it clear through action that those who condone and express rape culture are not worthy of positions of authority. Don't vote for anybody who says things about "asking for it," and contact your government representative to make your views heard if anybody else lets them loose in the Senate or House of Representatives. Call for the resignation of people in power who condone rape culture. Make your zero-tolerance stance known. The fact that Judge Persky, who delivered the reprehensible verdict in the Brock Turner case, is now being taken off his next case and is facing increasing calls for his dismissal indicates that public voices on these matters can have weight. Your rage can do things.

7. Help Out The Survivors

What else can we do to continue the conversation? Aside from talking about it, we can talk to the people who need to be heard most: the survivors. If you hear their stories, spread them; if possible, get yourself involved so that you can hear them yourselves, at shelters for victims and helplines offering advice and support. If you know somebody who's been assaulted, listen to them. Talk to your institution or workplace about supporting rape and sexual assault charities. Keep reiterating that treating anybody like this is unacceptable, that discussing it with dignity and support and respect is the minimum standard for human behavior instead of an exception, and that you are there, and you want to help. If the conversation fades into the background, so do they.

More like this
Beyoncé & Madonna’s “Break My Soul” Remix Honors A Group Of Black Icons
By Stephanie Topacio Long
22 Movies On Netflix That Are Perfect For The Whole Family
By Bustle Editors
Expert-Approved Hacks For Packing A Carry On
By Jessica Goodman
The Best Time To Date After A Breakup, According To Experts
By Bustle Editors
Get Even More From Bustle — Sign Up For The Newsletter