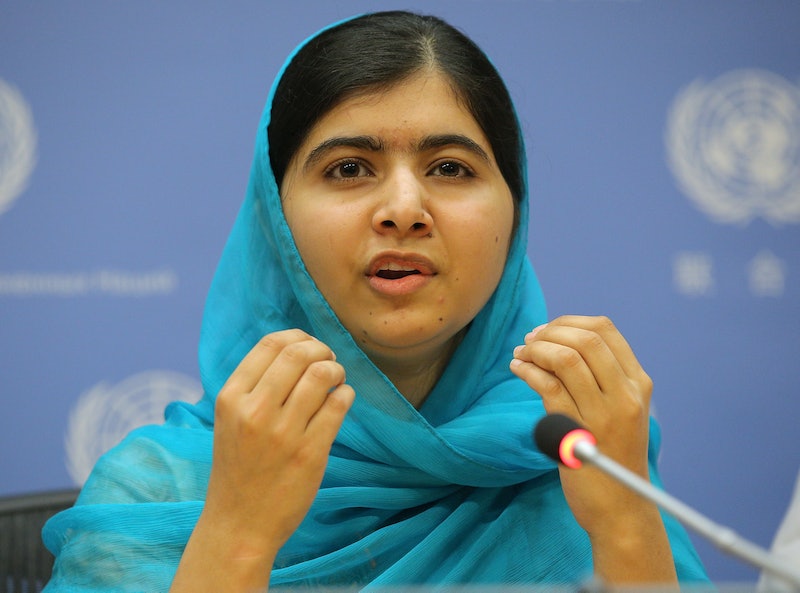 Although the idea of intersectional feminism is anything but new, it seems to be making a true third wave feminist revival, and this really couldn't be more awesome. I think we can all agree that the campaign for more inclusion in the mainstream feminist movement is long overdue, and for me personally, the resurgence of intersectionality in the mainstream feminist dialogue has already alerted me to the fact that my feminism was not nearly as inclusive as I thought it was. However, when we talk about intersectional feminism in the U.S., it's important to be mindful of how we can make our feminism more international as well. While it's understandable we might want to focus on the feminist issues we face at home, intersectionality, and the struggle for women's rights, extends far beyond our own borders.

Part of practicing inclusive feminism is being concerned with what feminism looks like around the world, rather than simply focusing on what feminism means to us as American women. Obviously, inclusive feminism in the U.S. is seriously lacking. Often, the dialogue surrounding feminism and women's rights in this country is dominated by white, cis, straight, middle class, and able-bodied feminists — and while they're doing some great things, there's something very messed up about the fact that feminists of color and LGBTQ feminists simply don't have the same kind of access to public platforms that white feminists do. The fact is, the majority of American women are privileged to certain rights and opportunities just by being born American, and this makes it easy for us to forget the importance of looking at feminism through a more international lens.

So in an effort to help myself and others be more inclusive feminists, here are five ways to make your feminism more international.

1. Educate Yourself About The Issues Women Around The World Face

It's not possible for us to make our feminism more international if we remain ignorant of the struggles women face abroad — and as I'm sure you're aware, those struggles are many.

Over 60 million girls worldwide aren't in school, and child marriage is still widely practiced in many non-Western nations. (It's estimated that, during this decade alone, 142 million girls will be married before they reach adulthood.) Furthermore, three decades of China's (recently demolished!) one-child policy has led to the infanticide, abandonment, and forced abortions of countless baby girls — as well as the forced sterilizations of many Chinese women.

Female Genital Mutilation (FGM) is another sickening women's rights issue that we can't ignore. Although FGM was outlawed in Nigeria earlier this year, it's still legally practiced in 29 African countries and several other Asian, Middle Eastern, South American — and even some Western — communities. Additionally, it's estimated that between 100 and 140 million women and girls worldwide have been affected by FGM according to the United Nations Population Fund (UNFPA).

Gloria Steinem, Kimberlé Crenshaw, Laci Green, and Rosario Dawson are all examples of awesome Western feminists who you should definitely check out if you haven't already. However, a big facet of intersectionality, and inclusive feminism, is listening to women who experience gender inequality differently than you do — and listening to the perspectives of international feminists like Sylvia Tamale and Lydia Cocha will help us make our own feminism more internationally inclusive.

Reading books by feminist authors of any nationality is always a good idea, but like we were talking about earlier, it's so important to listen to what women from different backgrounds have to say about feminism, gender, and just social justice in general. Reading international feminist authors like Chimamanda Ngozi Adichie and Malala Yousafzai is a great way to stay in touch with diverse, international, feminist perspectives and, in turn, make our feminism more international.

While I certainly have some catching up to do where international, feminist literature is concerned, I can tell you from experience that Adichie's The Thing Around Your Neck is one book you will not regret spending your time on. In fact, it just might blow your mind.

If you're anything like me, then you probably can't get together with your friend group and not have at least one conversation about the importance of feminism. So, the next time you're hanging out with your buddies, discuss the struggles international feminists face as well as the struggles we face here at home. It may not seem like much, but awareness plays a key role in impacting positive change. Plus, chances are, you'll learn something.

5. Find Out How You Can Support International Feminists

The state of international women's rights is sometimes so discouraging that it really can make you feel like nothing you do will be enough to make a positive difference — but that couldn't be further from the truth. Whether or not you can afford to donate your time and/or your money, you should know there are several ways you can support women abroad.

If donation is an option for you, there are so many great organizations dedicated to supporting women's rights internationally that it won't be difficult for you to find a way to contribute. However, if you can't afford to donate either time or money, that's OK, too. Raising awareness about international feminist issues and making an effort to shop ethically also helps empower women abroad — and it will definitely help you make your feminism more international.

More like this
The 19 Best Tweets & Memes About Bisexual Awareness Week
By Lexi Inks
Women Around The World Are Cutting Their Hair In Solidarity With Mahsa Amini
By Darshita Goyal
Black Women's Equal Pay Day Highlights An Upsetting Problem
By Brandi Neal
An Honest Review of MeUndies Boxers, According To A Non-Binary Person
By Megan Lasher
Get Even More From Bustle — Sign Up For The Newsletter