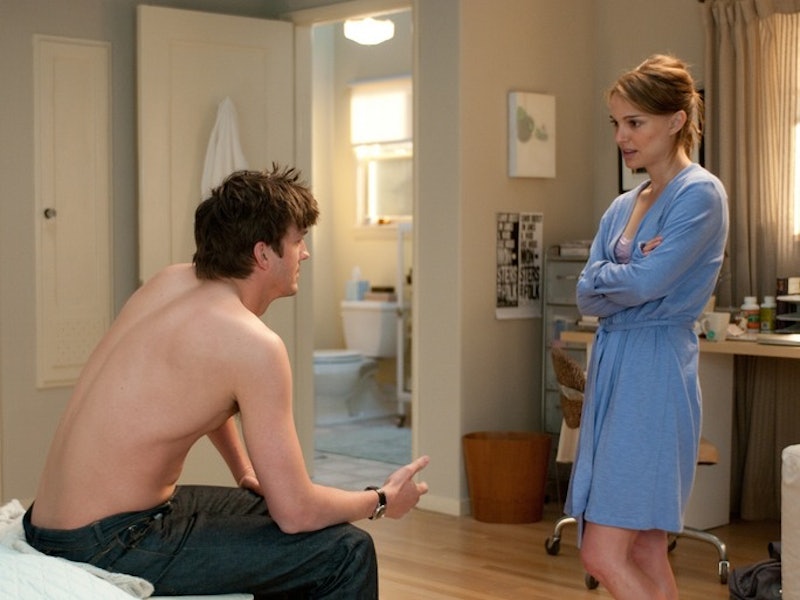 We’re always hearing that we could be having better sex, a better orgasm, or a better relationship. But how often do we hear the nitty-gritty of how we can actually better understand our deepest desires and most embarrassing questions? Bustle has enlisted Vanessa Marin, a sex therapist, to help us out with the details. No gender, sexual orientation, or question is off limits, and all questions remain anonymous. Now, onto today's topic: what to do if your boyfriend or girlfriend guilt trips you for not being able to come with them.

A: Thanks for the question! I’m sorry that what should be an exciting period in your sexual development has turned into a source of conflict between you and your boyfriend. Unfortunately, this is a dynamic that is all too common. Here are nine things to do if your partner makes you feel guilty about your orgasm.

1. Celebrate What Your Body Can Do

First things first: I think it’s awesome that you were able to learn how to orgasm on your own! We ladies have so much stacked against us when it comes to exploring our pleasure, and you should be proud of yourself for deciding to take the reins. Kudos to you for treating yourself to a fancy vibrator, too. I’m sure there were so many times over the last 27 years that you would have given up an arm or at least a pinkie to be able to orgasm (or at least I really hope you had more motivation than feeling guilty that you couldn’t orgasm with your partner). Don’t let all of this mess with your boyfriend take away from such a great accomplishment.

Your boyfriend is spewing a whole bunch of nonsense at you. I could dissect each point line by line, but the bottom line is that this is your body! You get to decide what to do with it, and you’re entitled to your own personal relationship with it. He has no right to be upset by this. He should be celebrating with you instead! He also has no right to say you’ve “emasculated” him or that other women had “no problems” orgasming with him.

3. Empathize, But Only If They Deserve It

Now, let me climb off my soapbox and put my therapist hat back on. There’s no denying that your partner, and other partners out there, are behaving badly, but most people don’t purposefully try to be jerks. They act that way as a reaction to getting their feelings hurt. One thing I’ve learned from my work as a sex therapist is that we all feel anxious about sex and we all desperately want to feel like we’re good in bed.

Orgasm is a clear and easy goal to focus on, and it’s far too easy for all of our anxiety to get fixated on this one goal. It’s understandable to really want to make your partner orgasm, and to feel insecure if you don’t. In your particular situation, I think a lot of your boyfriend’s statements cross the line, so I wouldn’t encourage you to be too forgiving. But in other situations, it can be worth at least validating that your partner feels left out. To be clear, it’s not a woman’s fault if her partner feels insecure, but it’s understandable.

Here’s the thing: your boyfriend’s reactions are practically guaranteeing that he’s not going to get the outcome that you both want. Making you feel guilty about your orgasm isn’t going to make it magically easier for you to orgasm with him; it actually does just the opposite. Any time we feel guilt, pressure, or expectation around our orgasms, it makes it that much harder to climax. This can be a good way to open up a conversation with your partner. Say something like, “look, we both want the same thing here, but the way that you’re responding is not making it any easier for me to actually have an orgasm. I need you to stop making comments like that. Let’s talk about some ideas that will be more productive.”

From there, you can give your partner an orgasm crash course. There’s so much misinformation about female orgasm out there, so it’s likely that your partner is working with some unrealistic expectations. Show him some of my past articles about female orgasm. Sign him up for the free orgasm workshop I offer on my website. Ask him to do some research on his own, too.

6. Get Them Involved In Your Explorations

7. Have Them Focus On What Really Matters

As I said above, orgasm can be a really tempting goal to try to cling to when you’re feeling insecure about your sexual skills. But it’s just not a great goal. Not only does it put undue pressure on both of you, but it also focuses on only 10-20 seconds of your entire interaction with each other. It’s like getting a massage and only focusing on 10-20 seconds of it; those few seconds might feel great, but you’re missing out on so much!

Instead, I recommend that you both try to focus on each other’s pleasure. We’re capable of feeling an infinite amount of pleasure when we’re with our partners. Pleasure is also the thing that’s going to lead you to an orgasm (in other words, orgasms don’t just appear out of nowhere. They’re the result of a build up of pleasure). You can give your partner more feedback using your words, body language, or moans. Knowing they’re making you feel good will help boost their self esteem and help you both focus on soaking up all of that pleasure.

9. Be Willing To Show Them The Door

I think bad behavior like what you’ve described is grounds for ending a relationship. Like I said above, I think many of your boyfriend’s comments crossed the line. He’s trying to make you feel ashamed and guilty about something that is not only perfectly normal, but worth celebrating too. If you want to give him a second chance, try out these tips and see if he can clean up his act. But if your partner can’t understand how his words and actions impact you, and insists on making your orgasm more about his own feelings than your pleasure, you should really consider walking away. It's controlling, potentially abusive behavior, and it's not OK. Period.