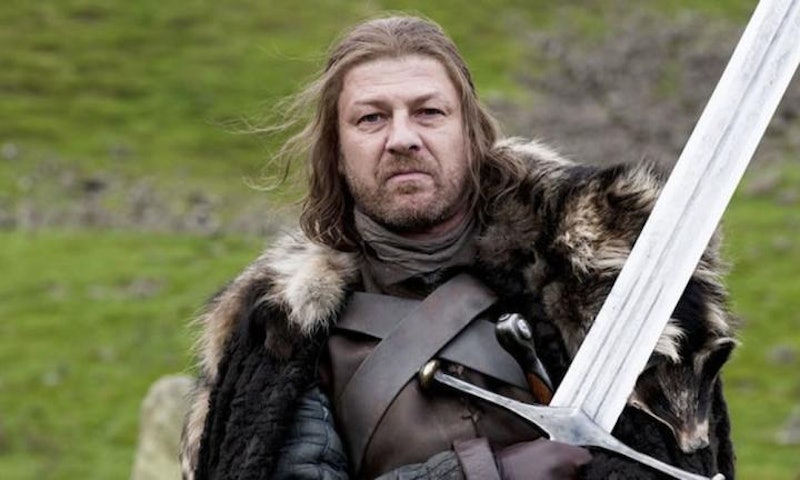 There is a serious lack of good people on HBO's Game of Thrones, and among them, a serious lack of good parents. If you go searching for an example of good parenting to the series' many underage characters, you might come up short. Most viewers might think the late Ned Stark was a rare example who fit the bill, and their reasoning would be understandable; Ned was noble, honest, and loving, and compared to, say, Jaime Lannister or Balon Greyjoy, an actual good person. He was present for the childhoods of all of his children, and took an interest in raising them and teaching them. But here's the thing: Ned Stark was actually a terrible father.

Look, when confronted with slim pickings for role models, I can see why people would see Ned as the best option of all the GoT dads. But I'm telling you, that'd be the wrong way to go. Ned might have been the logical choice from the get-go, but his actions during the first season (which is the only one in which he was alive) prove that he was no better a dad than his peers; he might even have been a worse one. Here are some of the many times that Ned proved that he wasn't actually the best dad in Westeros.

1. When He Didn't Tell Jon Who His Mom Was

Fans kind of assume at this point that R+L=J, and that Ned isn't actually Jon Snow's father. Still, even if Ned was just trying to keep Jon safe, keeping a secret like that is just unfair.

If R=L=J is true, then why would Ned keep up the ruse that he had an affair with some villager woman and came home with a bastard child? That's just cruel, and it led to Cat hating Jon Snow his whole life. Ned, dude, I think Cat could have kept the secret.

3. When He Left His Comatose Kid Behind

Bran was still out cold when Robert Baratheon's caravan, including Ned, was heading back to King's Landing. I mean, stick around to see if your child survives being pushed out of a window, right?

4. When He Was A Total Jerk To Theon — Always

Sure, the Greyjoys attempted to take over Winterfell, and, as a result, Theon remained a captive ward. But even though Robb embraced him as a friend, Ned always saw Theon as a prisoner, which probably led to some intense rebellious feelings and all of the evil stuff the character pulled later.

5. When He Killed Lady

I don't care how many mistakes Ned made throughout his lifetime — this was the worst. Killing Lady in place of Nymeria, who bit Joffrey, was when Ned lost my support.

6. When He Didn't Question Authority

Related to the Lady killing, why is is that Ned didn't call bullsh*t on the fact that Cersei and Robert ordered him to kill his daughter's pet direwolf? Lady was innocent, and the whole concept of a replacement punishment is bunk. But Ned let it happen.

7. When He Agreed That Sansa Could Marry Joffrey

It was pretty obvious from the get-go that Joffrey was a psychotic, egotistical monster. Why couldn't Ned stop this marriage? Instead, he let Sansa's teenage crush and a pal's enthusiasm to be "family" get in the way of common sense, and permitted the marriage of his eldest daughter to a total nut job.

8. When He Found Out A Dangerous Secret And Told Everyone He Knew

So if you found out that your friend, the King, wasn't actually the father of his children, and that his wife was sleeping with her own brother, and that all of the heirs were bastards, wouldn't you maybe keep that a secret until you got your children to safety or figured out a plan? Or would you go blabbing it to everyone so that your opponents figured it out again and had you killed, just like they did to the last guy (John Arryn) who knew? Guess which option Ned picked.

9. When He Didn't Set Up A Safety Net For His Daughters

When you drag your teenage daughters to a strange city, and you're going to be busy a lot of the time, maybe you should set up some way for them to get out in case something horrible happens to you? Nope? OK, then.

So while Ned might have seemed like a noble, honest guy at the start of Game of Thrones, he sure made a lot of mistakes, many of which had to do with just being a pretty bad father.