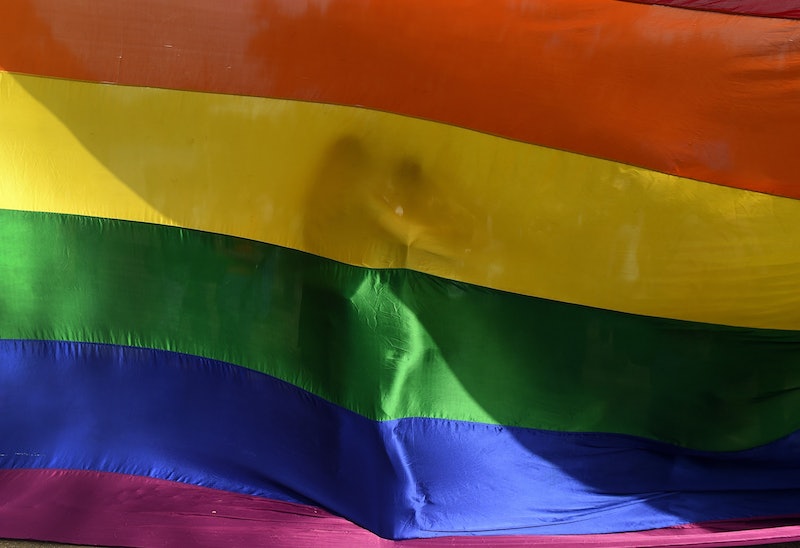 When it comes to LGBTQ Pride, most of us will immediately associate the movement with the rainbow flag. This leads me to wonder: What does the rainbow flag mean, anyway? Are there symbols or deeper connections rooted in the design and color of the flag we now associate with the LGBTQ rights movement?

As a queer person myself, I find research like this especially important; it's a way for me to become more connected with and educated about community. While I'm pretty active in my local LGBTQ community, it's definitely true that queer culture has changed substantially over the years; but since the history of queer culture isn't always taught in schools or represented well in the media, it's all the more worthwhile to me to actively learn about my community's history. This lets me better appreciate the full meanings behind things I might otherwise take for granted.

The Pride flag one of the most popular symbols for queer visibility, especially during June, which is Pride Month. I live in a pretty liberal area, and I often see the Pride flag hanging from people's porches and outside of local coffee shops and stores. Still, I know that this isn't the case everywhere; indeed, there are still a huge number of places it isn't safe to be out and proud, or even just places where LGBTQ people can be out and accepted. But no matter what your relationship is with the Pride flag, it's always good to learn more about a community's history in order to better understand their present. These are the key facets of development in the LGBTQ Pride flag:

Bright Colors In The LGBTQ Community

For a long, long time, members of the LGBTQ community were forced to live in the closet and connected with one another in subtle, coded language and signs. (It's worth noting that this is still the case in many societies and cultures today). One example of this manifested by queer people — often gay men — choosing to wear bright colors in order to signal to other men that they were queer. As Forrest Wickman explains in Slate, "Oscar Wilde was famous for wearing a trademark green carnation on his lapel, and the flower is thought to have been used by him and other Londoners and Parisians of the late 19th and early 20th centuries to quietly express their orientation." Many believe that the popularity of bright colors contributed to the association between rainbows and the queer community.

While the original LGBTQ flag also celebrated queer rights and equality, the actual design and meaning behind the flag was much different than it is today. Gilbert Baker, an artist based in San Francisco, designed the first rainbow flag in 1978. The queer community had started engaging in a lot of social activism and advocacy during that era and desired a symbol for their cause; so, Baker filled the void. He used the five-striped “Flag of the Race” as his inspiration, and, not unlike Betsy Ross and the creation of the United States flag, designed, dyed, and sewed the very first flag himself. The original Pride flag had eight stripes, with the colors and symbols breaking down as follows: Pink for sexuality, red for life, orange for healing healing, yellow for the sun, green for nature, blue for art, indigo for harmony, and violet for spirit. Later, Baker discovered that hot pink was not commercially available, so they changed the flag to only seven stripes. This is the ROYGBIV flag — with a name made from one letter for each color in the flag — we know today.

These days, the rainbow flag is universally understood as a symbol of LGBTQ Pride, which is notably different from earlier, when it was more of a symbol of the queer liberation movement. Today, the rainbow flag is often seen in Parades, community centers, and even schools to raise awareness for the queer community and our continuing struggle towards legal equality and societal acceptance.