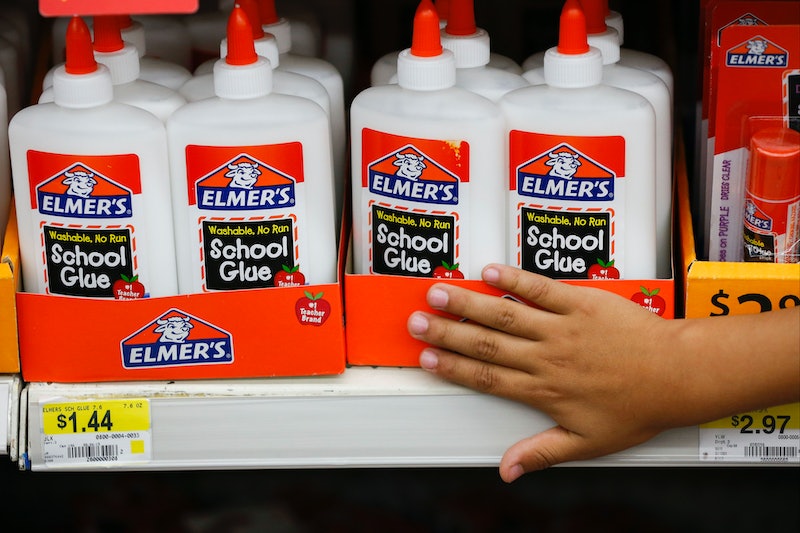 For a '90s kid, life was fun. It was care-free. When we succeeded, we did so spectacularly — but our fails were epic, too (hello, popcorn shirts!). Is it really any wonder we're having a little trouble letting go of the decade? Or that there are certain habits every '90s kid still has today? Cut us some slack. We were the first children of the century. Things were a'changing, and we got the privilege of being poised on the precipice of a great cultural shift. We had access to a million new fads and fashions, and we were given the room to figure things out as we grew.

What's not to love, right? Our memories of that era are warm and cozy, like our favorite flannel shirts. It wouldn't have been right to leave them behind. To our credit, though, we didn't bring all of our '90s kid baggage with us into adulthood. We checked some of the more comically bad stuff at the door, like the "Macarena." And JNCOs. But, yes, we'll be the first to admit that in some ways we just won't ever quit the '90s. The essence of that decade lives on in our hearts... and in some of the habits we formed way back then and can't seem to kick to this day.

So grab a Fruit-Roll Up, slather on some Lipsmackers, and join me in examining some of our most persistent '90s kid quirks.

You've been known to drop a well-timed "Duh," "As if," "All that and a bag of chips," and "da bomb" into casual conversation — and you'll never not yell out "psych!" when pranking someone.

2. Excessively Slathering Your Lips With Lip Smackers Or Carmex

You're starting to wonder if there's merit to the old myth that using lip gloss got you addicted to the chemicals in it, leading to chronic lip gloss usage. 'Cause, real talk, you slather that stuff on like it's going out of style.

3. Singing The "I'm Sorry! So Sorry!" Song From That Paper Towel Commercial Every Time You Screw Up

You know the words, '90s kids! I'm sorry... I'm so sorry. Don't act like you don't mutter this every time you spill a goshdarn glass of milk.

Ah, yes, the dying art that is cursive handwriting. They don't even teach this in most schools anymore, but you loved the way it made your notes look back in the day — especially when you put a little heart over your "i"s.

5. Balling Your Fruit Roll-Up Into A Big Sticky Ball

Sure, you could take the time to gently separate those tiny perforating shapes out, but what fun would that be? You much prefer mashing the entire thing into one giant sticky gob, which you promptly stuff in your gullet.

Not even trolling Twitter on your smartphone can compare with the supreme time-wasting appeal of going toe-to-toe with a best friend in a heated round of paper football.

7. Idly Scanning Cereal To Check For A Toy

The logical part of my brain tells me there is no point in gently shaking (read: turning upside down and exploring uncouthly with my hand) my cereal, because boxes don't come with toys now. Reason #1,703,448, 323 that adulting sucks sometimes.

Yes, there are many other more mature breakfast beverages on the market. But there's something about waking up on a Saturday morning and chugging Sunny D that just makes you feel alive again.

Not a week goes by where I don't say "You're killin' me, Smalls" to someone or proclaim "I love the smell of commerce in the morning" when I enter a shopping establishment.

Your listening may be low-key nowadays, but there's some part of '90s kids' genetic coding that makes us especially susceptible to group harmonies (slash cute boys).

11. Finishing The Sentence "In West Philadelphia, Born And Raised..."

"On a playground is where I spent most of my days/Chillin' out, maxin', relaxin' all cool/And shootin' some b-ball outside of the school...." See? Even now, I'm powerless.

And then being pissed approximately 12 seconds later when it is rendered completely devoid of flavor. That temporary tattoo, though!

They can make fancy apps all they want — such high-fangled technology will never replace the feeling you get watching that deck of cards bounce around your computer screen after a win.

14. Wondering, "Where In The Heck Is Carmen San Diego?"

I think we can all agree '90s office supplies were all that and a bag of chips, and anyone who still uses them is dabomb.com.

16. Spreading Glue All Over Your Hand And Peeling It Off When You're Bored

Surely I'm not the only one who still does this. Right? Right?!

Every '90s kid knows that the only way to fix a malfunctioning piece of electronic equipment is to blow into its cartridge, port, or any other place your magical exhalation can eke into and work its supreme powers of sorcery.

18. Putting Bugles On Your Fingertips

You're a witch! You're a tiger! You're playing with your food, and you do not GAF. Just be careful not to bite your digits, dude.