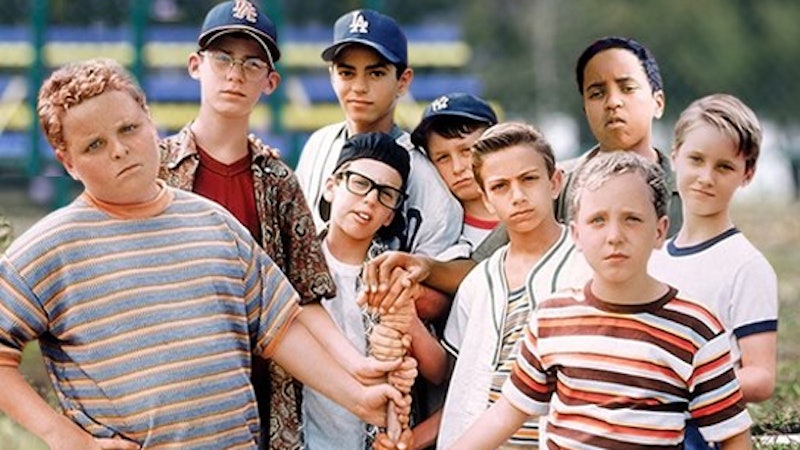 With so much talk about Millennials, one might actually be led to believe that everyone under this generational banner is basically one and the same. But, as Millennials are so acutely aware, this is not the case. Depending on which side of the massive 20-year Millennial timespan you were born on, you likely identify either as an older Millennial or a younger Millennial — and accordingly, that makes for plenty of pop culture barriers. Like, for example, some of the phrases older Millennials understand that younger Millennials don't. There's virtually a whole language we older Millennials picked up in the late '80s and early '90s which leaves our younger brethren puzzled.

This makes a lot of sense when you think about it. Since Millennials are loosely defined as anyone born between 1980 and 2000, that means there are a lot of things those born during the front half of this generation were privy to that the latter half was not. If you were born in the '80s, it's safe to say you're an older Millennial (welcome to my bracket, bud!), and we all know that '80s-babies-turned-'90s-kids basically lived in our own special little world anyway. We dressed differently, we chillaxed differently, and we definitely talked differently. Of course, the same can be said for younger Millennials or '00s kids. Honest to god, I have no idea what my younger Millennial family members are saying 97 percent of the time. But that's a whole 'nother article, to be written by someone far younger than me.

In the meantime, join my ancient AF self in visiting some of the phrases that we older Millennials were so fond of back in the day. Oh, who are we kidding — we totally still use every. Single. One.

I've not yet watched the newer incarnation of Full House on Netflix, so it is entirely possible younger Millennials are now being introduced to Uncle Joey's classic catchphrase from the OG series. But I bet they don't use it in casual conversation, complete with hand gestures. Although, come to think of, perhaps that's not something I should be bragging about.

Of this much I am certain: My siblings and I should not have been watching In Living Color during its 1990-1994 run, but somehow we managed to make this contraband viewing happen. Hence our obsession with Homey D. Clown, Damon Wayans' hilarious ex-con clown who had a penchant for hitting kids over the head with a sock full of pennies. Yep, still funny!

Someone remind me again why Dinosaurs went off the air? Baby Sinclair was the cutest... even when he was whacking Earl with a frying pan, baseball bat, or whatever other item lay conveniently near his high chair. Hey, Netflix, here's a show that deserves a reboot.

Family Matters was around for nearly the entire '90s, so it's doubtful any '90s kid was impervious to Steve Urkel's quirky catchphrases — the most iconic of which was, "Did IIIIIIII do thaaaaat?" Urkel said it any time he caused a catastrophe — so basically, all the time.

One sentence in a commercial about a life alert bracelet for the elderly, this phrase caught on like wildfire, parodied in countless ways by older Millennials. Bonus points if you can still sing the jingle! Hint: I've fallen and I can't get up, I'm stuck to the floor like a peanut butter cup....

While we're on the subject, can I just say how ahead of it's time Captain Planet was? A cartoon about socially and ecologically conscious teens trying to save the world through sustainability? Genius. Now be honest: You totally picked an element and would power up with your BFFs (water, hollla).

If we're keepin' it real, I was high-key crushin' on Jim Carrey during his Ace Ventura days. Judge me not, friends. As such, I was also prone to breakin' out an "Allllllrighty then" all too often. I even had a smiley sticker with Ace's swoopy hair on my vanity mirror exclaiming these words.

Any older Millennial worth their salt undoubtedly knows exactly what movie this catchphrase hails from. But since there could be younger Millennials reading, it hails from 1990's Home Alone. 'Twas the scene that inspired countless attempts to pull off a similar scaring-the-pants-off-the-pizza-guy feat, which mainly just ended in getting grounded.

Let's not waste time on false pretenses — if you're an older Millennial, you've probably used this line from Kindergarten Cop recently. And by "recently," I mean yesterday, when a friend from a swap group told me she was coming down with a migraine. You know, hypothetically.

10. "Wanna Hear The Most Annoying Sound In The World?"

The answer to this question from Dumb and Dumber should always, always have been no, and yet our parents still kept falling for it. Or humoring us. Or, come to think of it, maybe we just never gave them time to respond before launching into what remains the most annoying sound in the world.

No Jurassic Park spinoff will ever come close to the original. Sorry 'bout your luck, Chris Pratt. I love you and all, but you just can't compete with the nostalgia and the one-liners from the 1993 version. Case in point? This perfect line from Samuel L. Jackson's character. Feel free to begin using again with great frequency.

A League Of Their Own is, IMHO, one of the best movies to come out of the '90s. Yes, I watch it every time it airs on TV, without exception. And yes, I will continue to repeat these words from Tom Hanks' character whenever I'm involved in any team sport. See also: What a hitter!

I don't know that all older Millennials went around repeating Pauly Shore phrases so much as I did. I've told you before people that I'm tragically unhip. Whatevs, though. Encino Man and Son-in-Law were my jam back in the day, and I'm only marginally embarrassed to admit it.

There's nothing this phrase from The Sandlot doesn't work for. Go ahead, give it a try. Or if you're an older Millennial like myself who has never stopped saying this (or given up your deep-seated love for Benny "the Jet" Rodriguez), keep on reppin'.