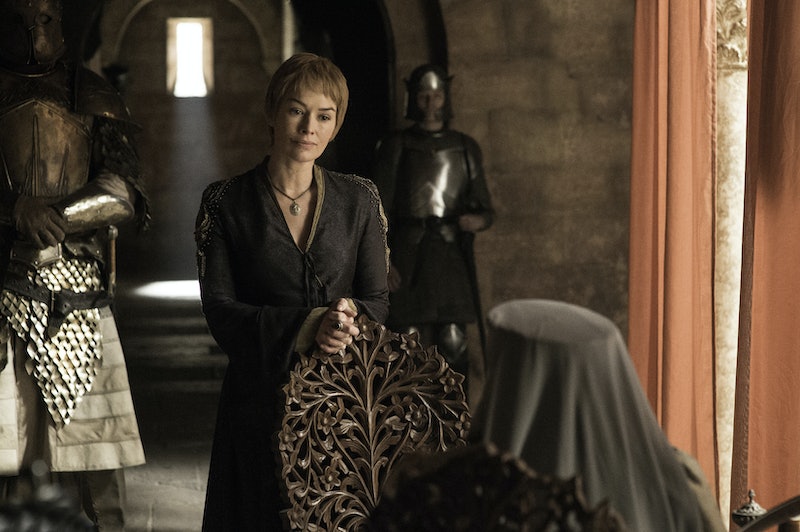 Forget Baby, the person you really don't want to put in a corner is Cersei Lannister. As Game of Thrones Season 6 nears its grand finale, all eyes should be on Cersei because the one thing you need to know about the former queen is she is at her most dangerous when she is being underestimated. In Episode 8, the High Sparrow convinced Tommen to end the practice of trial by combat in order to force Cersei to stand trial herself, but that was the absolute worst move the High Sparrow could have made.

While it may seem like all is lost for Cersei if she cannot name the zombie Mountain as her champion, Cersei has another, far more dangerous plan that could spell doom for the people of King's Landing. Cersei's relationship with the former maester Qyburn is the one Game of Thrones Season 6 detail no one should overlook. The show has mostly kept Cersei and Qyburn's machinations off camera. Viewers know Qyburn is the one who reanimated the Mountain, and he has stepped into Varys' role as the keeper of the cities little birds, but he has also been searching for something just for Cersei, and his search has proven to be fruitful.

The show has not explicitly stated Qyburn discovered the massive cache of wildfire the Mad King kept stored beneath King's Landing, but between Bran's vision of wildfire spreading beneath the city and Dany's vision of a destroyed throne room way back in Season 2, it is practically inevitable that Cersei will choose a trial by fire. In other words, if you were counting Cersei out after the High Sparrow's manipulations, then think again. If anything, Season 6 is setting Cersei up to be more dangerous than anyone could have ever imagined.

Season 5 ended with Cersei at her lowest point. Forced to take a walk of shame through the streets of King's Landing, shorn of her hair and stripped naked, Cersei suffered the ultimate humiliation. She has not forgotten what the High Sparrow did to her or how the people of the city laughed, taunted, and attacked her. She does not care about the small folk, she doesn't care about playing by anyone's rules but her own, and she definitely does not care about any authority the Faith believes it has over her. Cersei only wants one thing — vengeance — and she will take it by any means necessary.

With Cersei's sole motivation being a desire to cause as much pain to those who crossed her as humanly possible, she is a wild card who may be sitting on enough wildfire to burn the entire city to the ground. Game of Thrones could be setting Cersei up to be the Mad Queen because there is simply no way her last remaining son is going to make it out of this season alive. The prophecy that has haunted Cersei all these years stated she would have three children and each one of those children would die. Given Tommen's newfound devotion to the High Sparrow, it would be so easy for him to become caught in the crossfire of the battle between his mother and the Faith.

If you remember nothing else about Cersei as Season 6 comes to a close, remember she is being driven by a desire to burn her enemies to the ground. Her need to win could cost Cersei her last remaining son and possibly even Jaime, who has no desire to watch another fire happy royal commit atrocities, even if this time the royal in question is his beloved sister. Cersei is certainly going to win her battle with the High Sparrow, but her victory could cost Cersei the last shred of her humanity in the process.

Cersei's back has been forced against the wall, and there is no telling how many people will pay for trying to strip her of her power. As Season 6 ends, Cersei is the character to watch out for.