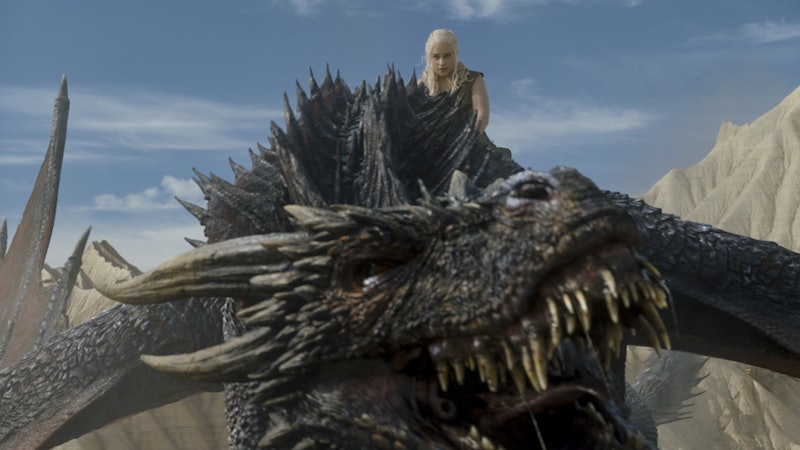 It's about time! After six seasons of waiting, Daenerys Targaryen is heading for Westeros… finally. The former "Beggar Queen" who once had nothing but a dead father, a dead brother, and a dead husband now has everything she needs to conquer the Seven Kingdoms: three fully-grown dragons under her control, an army of Unsullied, the Dothraki cavalry, the ships of the Iron Fleet, a group of loyal advisers, and her first official Westerosi alliance, thanks to Theon and Yara Greyjoy. Everything is primed for Dany to sail across the Narrow Sea in next week's Game Of Thrones Season 6 finale — but that begs the question: Where in Westeros will Dany go first?

After all, it's a pretty massive continent. Although it's commonly referred to as the Seven Kingdoms, Westeros actually has nine main regions: the Crownlands, Dorne, the Iron Islands, the North, the Reach, the Riverlands, the Stormlands, the Vale, and the Westerlands. Each of those regions is ruled by one family with varying degrees of loyalty to the Iron Throne, then subdivided into multiple minor houses, each with their own varying degrees of loyalty to their ruling family. To say it's a bit of a mess is an understatement, and it will take some expert political maneuvering on Dany's part to unify the entire continent.

So what's her smartest first move? Let's weigh some of her potential options:

The obvious choice would be for Dany to head straight for the capital and the literal seat of power, the Iron Throne. If her first move in Westeros was killing King Tommen, that would effectively wipe out a large chunk of the resistance she might otherwise face. (There's no Baratheon force left to speak of, nobody's particularly fond of the Lannisters anymore, and even the Tyrells are only loyal due to their tenuous marriage pact.) With the boy king leaving no line of succession behind, the child of King Aerys might be the most logical heir to the throne anyway.

However, heading to King's Landing first would be too instantly gratifying, so I'm sure something will delay her arrival in the capital for at least another few episodes. (Besides, Dany's vision in the House of the Undying back in Season 2 foreshadowed the Mother of Dragon's arrival to a Red Keep already destroyed by some other force.) Perhaps a pit stop on her family's ancestral home of Dragonstone will be her first move, broadcasting her arrival to all of Westeros and waiting to see which houses will rally to her cause before making her official strike against King's Landing.

Given that her only Westerosi allies so far are the Greyjoys, Dany might feel compelled to free the Iron Islands from Euron's grasp in order to consolidate that alliance and earn the loyalty of all the Ironborn for help in her impending invasion. However, Pyke seems like an unlikely first stop if only because it's all the way on the other side of Westeros from Essos; Dany would essentially have to fly over King's Landing just to get there.

If King's Landing has already been destroyed (by Cersei and her wildfire, probably) by the time Dany gets there, then where else might the Breaker of Chains make her home base? What more thematically appropriate location than the castle infamous for having been overrun by dragons during the invasion of Aegon the Conquerer? Harrenhal's location in the Riverlands is much more central than King's Landing, which would allow Daenerys to strike in pretty much any direction without warning.

Now that the Bolton forces are decimated, the largest army in Westeros not loyal to King Tommen are the Knights of the Vale. But the Knights of the Vale are not currently in the Vale, but rather sitting pretty at Winterfell after helping Jon Snow reclaim his ancestral home. They would certainly come in handy during Dany's invasion… and positioning her and Jon in the same place would come in handy for the upcoming revelation that he is actually her brother Rhaegar's son.

If the title of the finale, "The Winds Of Winter," is any indication, Dany's army might not be the only hostile force about to officially invade Westeros. If the Mother of Dragons gets word that the White Walkers have breached the Wall before she sets sail, she may change her mind and — rather than coming to conquer the Seven Kingdoms, she may be coming to save them. Putting her plans for the Iron Throne on hold in order to rescue the realm from the White Walkers may be just the thing Daenerys needs to win the love and loyalty of the people she intends to rule.

Geographically, Dorne is the closest Westerosi region to Essos, and thus would be the most logical place for Dany to make her first stop. The Martells hate the Lannisters as much as she does, and their family was once allied to the Targaryens thanks to Elia Martell's marriage to Rhaegar Targaryen. Granted, that marriage didn't end happily for anyone, but Ellaria Sand would still probably be more eager than most to help Dany take down the family that killed her lover and his sister. Plus, adding Ellaria to Dany's allies (which already include Yara) would only augment her feminist takeover of Westeros — and it would be a great way to bring the maligned Dorne storyline back into the fold in a positive way.

It might be too much to hope that Dany actually arrives in Westeros in next week's finale… but just watching her pick a destination and finally leave the quagmire that has been Meereen will be a satisfying enough ending for Season 6.