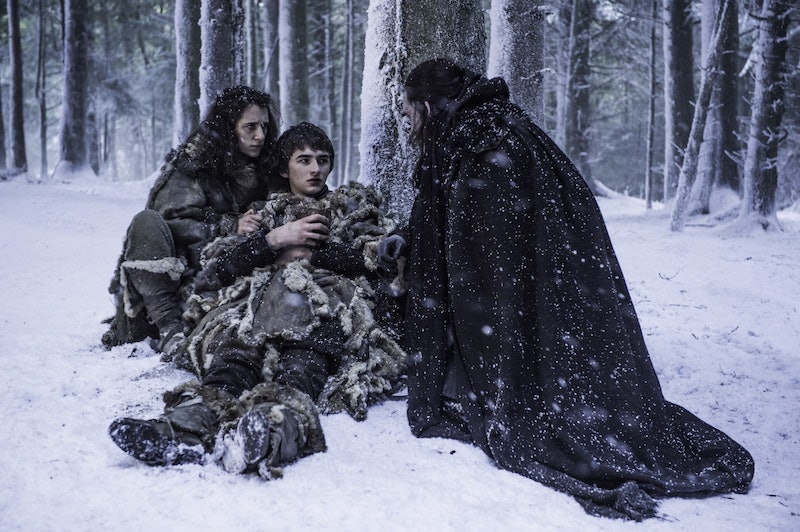 Game Of Thrones Season 6 has, at times, seemed like on screen fan fiction, and after seasons and seasons of misery, that is totally fine by me. Aside from the extremely satisfying ending to last Sunday's epic episode, "Battle Of The Bastards," Season 6 has also brought back some faces we thought we'd never see again in the Seven Kingdoms — and also, Jon Snow, because he was never going to stay dead anyway. Though Jon Snow's resurrection, the Hound's survival, and Yara Greyjoy's return to the great game were all fantastic, it's Benjen Stark who had the best return in Game of Thrones Season 6. Why? Because he has secrets, and it's time to spill. He could be sitting on the knowledge of Jon Snow's parentage, as well as the key to defeating the White Walkers.

A brief recap: Benjen Stark is Ned Stark's brother, and uncle to the Stark children. He was a ranger for the Night's Watch, and, in Season 1, brings his nephew Jon Snow up to the Wall. Shortly thereafter, he goes on a mission north of the wall to find out more about those pesky White Walkers, but only his horse returns, giving Jon Snow even more to brood about.

Though Benjen was assumed dead, that's never a safe assumption with a Stark. He returned in "Blood Of My Blood," to save Bran and Meera from what seemed like a sure and swift death at the hands of the wights, taking them out with his swinging fireball mace. (He is, in the show, the character Coldhands, who greatly differs in the books.)

Benjen tells Bran and Meera that he was saved by the Children of the Forest after he had been stabbed by a White Walker, preventing him from becoming fully a wight, though he's in between on the whole alive to dead spectrum. He was given a mission by the Three-Eyed Raven to watch over Bran, and that means that Benjen holds more secrets to the past than what he discovered north of the wall. He tells Bran that, when the Night's King arrives, Bran will be ready, which means Benjen has the knowledge to prepare him for that imminent terror.

Hopefully, it means he will lead Bran to see out his Tower of Joy vision, possibly, finally confirming the R + L = J theory that fans were hoping would prove true in Season 6. That theory suggests that Jon Snow is not Ned Stark's bastard after all, but rather the son of Rhaegar Targaryen and Lyanna Stark, Benjen's sister. If Ned swore to Lyanna that he would protect her son, Benjen might have known too. And, if he is a proxy for the Three-Eyed Raven, then he definitely has keys to the past.

Which, again, brings us to Jon Snow. Jon was one of the last people to see his uncle alive, and, now that they have both come back from the dead, it's likely that they will meet again, as Jon is leading the effort in the North to defeat the White Walkers. Benjen's return is another strong case for the Stark family rising up and reuniting: Arya is on a mission to make it home to Winterfell, Jon and Sansa have successfully taken back their home, though more bloodshed lies ahead, and Bran is still discovering the secrets of the past, present, and future, which are, as seen in the devastating episode "The Door," all inextricably intertwined.

Benjen Stark's hair is full of secrets, and it's time for those secrets to be revealed.