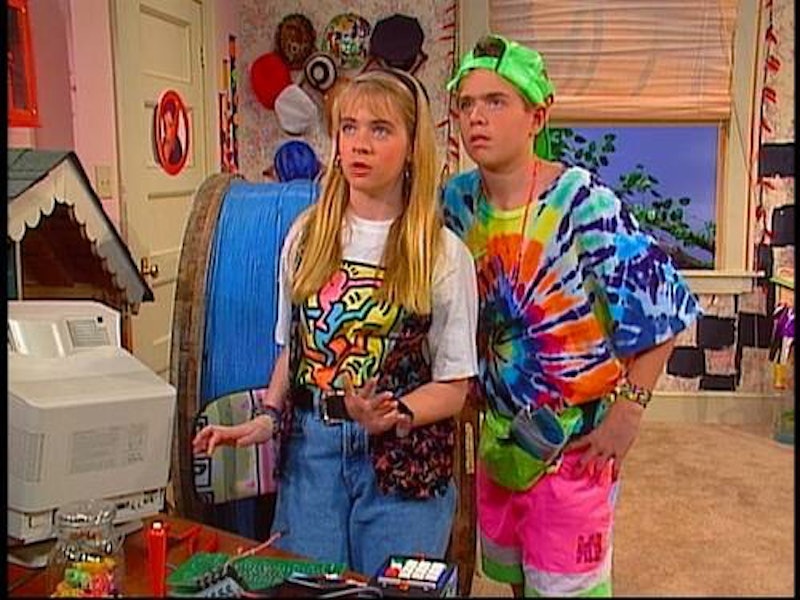 Much like history, fashion is too doomed to repeat itself. Case in point? The sudden influx of chokers, a revival of bucket hats, and of course, the infinite sea of "how to dress like your [insert favorite '90s TV character]" articles. Been there, done that. Though it may be the year 2016, '90s fashion reigns supreme like no other. I'm guilty as charged — I, too, have fallen under the hypnotizing spell of tie-dye and color tinted sunnies à la Mary-Kate and Ashley.

Perhaps millennials are drawn to '90s trends for its nostalgic factor — and I certainly can't blame them. In an era of teenage Instagram influencers and ten-year-olds who can recite Instagram filters by heart (how???), older social media denizens are especially feeling the age gap. America's youth of today is born into technology — the same technology that previous generations had to suffer through much trial and error for.

In the sartorial world, '90s fashion is as its prime, proving that despite time, there is an innate longing for the past. You may think that mom jeans are a product of contemporary trends, but you'll be surprised that its original roots stem from decades ago. But let's get real: most of the raging trends nowadays were originally relics of the good 'ol '90s.

Is it even possible to walk into a middle school nowadays and not see cliques of thirteen-year-olds in matching tattoo chokers? Whether you were born in 2002 or 1992, chokers are having a moment on the accessory front. Sabrina Spellman, '90s Drew Barrymore, and Tai from Clueless were just a few of the OG offenders.

Believe it or not, there was a time where I utterly despised overalls — namely because I wore the embarassing butterfly print variety when I was younger. But nowadays, denim overalls have become synonymous with utilitarian dressing — something about rugged streetwear meets runway just seems to work. Back in the '90s, overalls were not a catwalk staple yet — in fact, they were the choice ensemble for the Fresh Prince of Bel Air and the NSYNC boys.

You can't get through a '90s-themed style article without at least one reference to the grunge movement (long live Kurt Cobain). The classic grunge getup — flannel around the waist, Birkenstocks, combat boots, anything and everything thrifted — is popular as ever in millennial fashion though it originated from the '90s music scene in Seattle.

Never forget Cher Horowitz's vampy red slip dress in Clueless. Demure yet seductive at the same time, slip dresses were a favorite in the celebrity circuit during the '90s — off-screen, Kate Moss rocked them on the red carpet, while Jennifer Aniston and Gwyneth Paltrow were also fans of the silky number that fits like a dream.

From chunky, light-up styles to neon hues, sneakers were a frequent sighting in '90s dressing. Exhibit A: Tim Allen and Co. in Home Improvement. Exhibit B: Jay-Z and an iconic pair of Nike Forces. Nowadays, street-chic kicks are trending more than ever — evidently, everyone wants a taste of both comfort and style.

6. The Denim on Denim

People like to claim that Kim Kardashian "broke the internet", but I'd like to contest that and argue that before she came along, Britney Spears and Justin Timberlake were the first to do so at the 2001 VMAs — if 2001 had been populated by social media sites and trending hashtags anyway. The duo helped put the denim on denim set on the map — nowadays, it is not rare to see both bloggers and off-duty models alike pairing denim jackets over denim jeans.

Truth be told, I had no idea bucket hats were having a comeback until I stepped into my favorite Buffalo Exchange and noticed the sudden invasion. From tropical prints to neutral hues, the bucket hat might as well be on rivalry terms with the equally-as-popular snapback. Everyone from rappers of the '90s (I'm looking at you, LL Cool J) to the Olsen twins were team bucket hat.

While I dearly love boyfriend jeans, mom jeans is the bandwagon I have yet to hop on. I think I'll need much convincing before I take the plunge — even if the cast of every major '90s television show seemed to sport the formulaic mom jeans and colored tee combo in promotional photos (hellooo, 90210, Full House, and Saved By The Bell).

It is most likely because of Justin Bieber and Kendall Jenner that "Calvin Klein underwear" is even in the vocabulary of today's teenagers. The concept of exposed undergarments as fashion is still a gray area for me, but I do get the appeal of it — CK briefs are the epitome of sex appeal with simplicity. But before the Biebs and Kendall came along, '90s supermodels Christy Turlington and Kate Moss were the faces of Calvin Klein Underwear (and also probably the reason why you could find a discreetly ripped page taped in every guy's locker).

To further prove the resurgence of grunge fashion in '16, you don't have to look no further than Dr. Martens. Truth be told, I also wanted a pair years back, but the thought of breaking in Docs (the true American horror story) stopped me. I mean, couldn't you imagine pairing your new Docs with ripped denim and a flannel casually thrown on top for a relaxed Sunday outfit? But hey, if Docs are Tia and Tamara-approved, I'll definitely reconsider.

One word: Coachella. Strange to think that, at one point, fanny packs translated to bizarre, ironically-worn fashion. However, nowadays and the '90s aren't so different after all — fanny packs are back, and they might be here to stay. Music festival season seems to be prime time for fanny pack sales, and for good reason too: I mean, how else can you store your neccessities and have room to groove to your favorite tunes? Time to make like Clarissa Darling and Sam Anders.