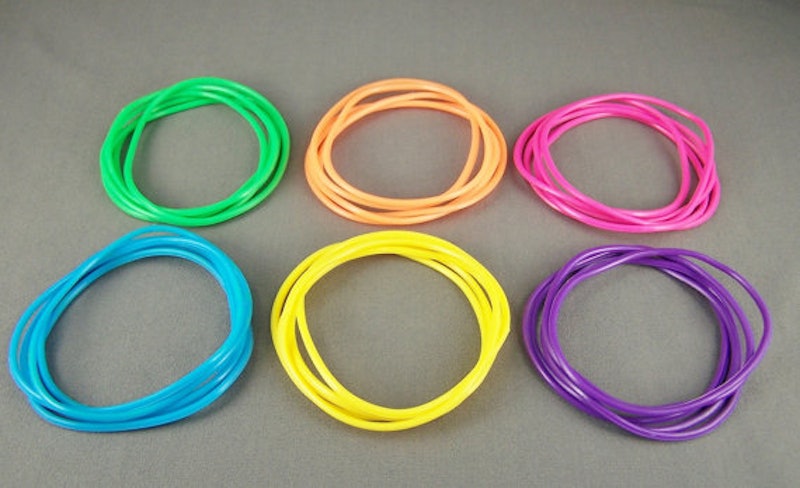 Isn't it funny how at the time of wearing a certain fashion or beauty trend, we often think it’s really cool, only to later reflect and realize that it was totally cringy? There were a bunch of early 2000s fashion and beauty trends that were creepy, but that you probably thought ruled back in the day. Hindsight is usually a wonderful phenomenon, but when it comes to looking back at things we used to wear and think were awesome — when in fact they were totally weird and slightly eerie — it can quickly becomes an unwelcome guest.

The early millennium brought with it the rise of the emo subculture, which The Daily Mail dubbed “the sinister cult of emo.” From an outsider’s point of view, the whole thing may have seemed a bit morbid, but in fact it was actually all about being true to yourself, celebrating your individuality, and not being afraid to show your emotions.

That said, there were more mainstream trends that were accepted by the masses, but actually more bizarre than the emo trend. Because they were mainstream, few questioned them. Again, it wasn’t until years later that we could look back on old photos of ourselves with adult eyes and feel a little unnerved. So here are a bunch of creepy early ‘00s fashion and beauty trends that you might have worn when you were younger.

Not clever. Not funny. Just frightening.

Imagine leaving a skull bead bracelet on your bedside table, falling asleep, and waking up in the morning to come face to face with the unseeing eye sockets of multiple tiny craniums. Not so cute now, huh?

There was just something innately wrong about a pre-teen running around in a tee that said "Bitch" or "Sexy" across the front.

Carrying your stuff around in a casket doesn't seem half as edgy as it once did.

Remember those weird jelly bracelets? You might have worn them during your emo phase or because all the cool kids were sporting them. Regardless of how brightly-colored these plastic fantastic bangles were, they had a much darker side to them.

You may or may not have known that some young people growing up in the early millennium believed that each bracelet referred to a different sexual act you had to perform if someone snapped one off your wrist. On the other hand, you may have worn them them to show off what you'd already done, or what you pretended to have done. This likely led to people feeling peer-pressured to do things they weren't ready for, or feel the need to lie about their sexual encounters. The entire thing was ridiculous and super creepy.

There was nothing cool about promoting guns in any way, shape, or form.

Sure, there was something tongue in cheek about women walking around with a comedic slogan on their butts back in the early '00s. But when tracksuits with butt slogans were worn by young girls, who might not have grasped the entire context of the pants, it was just strange.

Wearing a blood-splattered hair accessory when it wasn't Halloween likely did one of two things: Made it look like you'd been in an accident, or like you'd been on a bloodthirsty rampage. Neither of these things made people feel relaxed around you, even if they knew it was fake.

Along with wearing as much black eyeliner as your peepers could take, there was another emo beauty trend that proved popular: Wearing tons of red eye makeup. It was usually rocked underneath the eye to make the wearer look like an extra in The Walking Dead . If looking ill or resembling a zombie was your cup of tea, you probably layered on your red eyeshadow like there was no tomorrow.

9. The A Clockwork Orange Eyelashes

If you've ever seen A Clockwork Orange, you'll know why this beauty trend was verging on disturbing. Although some folks may not have made the connection, making yourself look like a sociopathic Droog was not the best of looks, unless it was Halloween, of course.

There was something so weird about wearing a faux bandage to make it look like you had injured yourself. It was akin to walking around with a fake cast on your leg — totally inappropriate and simply odd.

Re-popularized by bad boy Ryan Atwood in The O.C., the white tank top he donned on multiple occasions was actually referred to as his "wife-beater." This day in age, one would hope it'd be unacceptable to give garments nicknames that make a nod toward domestic violence.

Thank goodness most of these trends are dead and buried. But in 20 years time, we'll likely look back wide-eyed to some of 2016's in vogue styles and wonder what in the world we were thinking.

More like this
How The Thanksgiving Episode Of 'Gossip Girl' Changed Pop Culture History
By Gabrielle Bondi
The 'Kenan & Kel' Reunion On 'SNL' Took A Dramatic Turn, Thanks To Keke Palmer
By Brad Witter
The First Trailer For 'That '90s Show' Includes So Many Nods To The Original Series
By Jack Irvin, Alyssa Lapid and Grace Wehniainen
Rita Ora’s Sheer Dress & Mermaid-Inspired Prosthetics Stun At British Fashion Awards
By Sophie McEvoy
Get Even More From Bustle — Sign Up For The Newsletter